Queen rearing involves presenting selected larvae – whether grafted or in natural comb – to a colony in such a way that they are raised as new queens. The cell raising colony is prepared for the introduced larvae, either by rendering it temporarily or permanently queenless, or by separating the part of the hive for larval rearing from the queen (as is done in the approach popularised by Ben Harden). In addition, efforts are usually made to ensure the colony is given syrup (or that there is a good flow of nectar) and has ample pollen so the developing queens are well fed.

A Cloake board is a simple way of using a single large colony to provide both a queenless cell starter and queenright cell raising colony. The Cloake board consists of a removable metal or plastic sheet in a three-sided rim that sits above a queen excluder (QE). To avoid confusion in the description below I’ll use the term ‘Cloake board’ or ‘board’ to refer to the entire thing, and the term ‘slide’ to refer to the removable sheet. 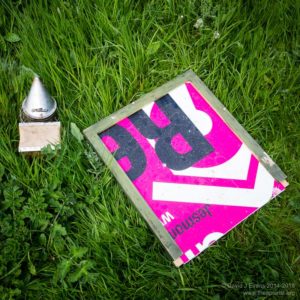 A few of the usual suppliers sell Cloake boards with integral QE’s for £35-55 … or you can bodge one together out of some scrap wood and an abandoned (honestly 😉 ) Correx ‘For Sale’ sign for an estimated £1 like I did and simply sit it on top of a spare QE (of which you presumably have several). The bees won’t notice the difference.

The board serves two purposes; it provides an upper entrance to the colony and – depending on whether the slide is in or out – it converts the portion of the colony used for cell rearing from queenless to queenright. With the slide inserted, the upper box of a double brooded colony is rendered temporarily queenless (as no queen pheromones can get to the upper part of the hive), providing ideal conditions to start new queen cells. With the slide removed, the top box acts as a queenright cell raiser and finisher, in which the queen remains trapped below the queen excluder. A couple of simple manipulations of the hive are all that is required to maximise the numbers of young bees in the upper box. The Cloake board is one of the many beekeeping items named after its inventor, in this case Harry Cloake of New Zealand.

Using a Cloake board

Using a Cloake board is very straightforward and can be divided into three basic stages – colony preparation, concentrating the bees and raising the queen cells. The queen cells can be started from grafted larvae or from eggs/larvae on natural comb – hive preparations and manipulations are essentially the same.

What’s happening … ? Two main events are taking place. Firstly, the bees are reorientating to the new entrance on the ‘front’ of the hive (which is a brood box height above the original entrance). You can help them find this new entrance by placing a sloping sheet of ply on the front of the hive as shown below. Secondly, lots of nurse bees are congregating on the open brood in the upper box. These are the bees that are going to raise your new queens. 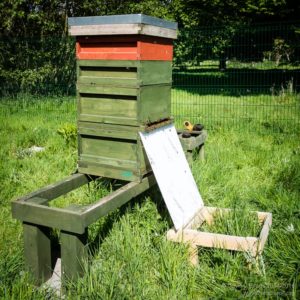 What’s happening … ? Again, two events are occurring. Firstly, the bees are being concentrated into the upper box. Those flying from the lower entrance have already reorientated to the Cloake board entrance and will return there, becoming concentrated above the slide as they can no longer go down through the QE. Bees in the supers are joining them. The clearer board I use is very fast and efficient and the supers will be emptied in hours. Secondly, the bees in the top box are realising that they are queenless and will then readily accept the grafted larvae you will be adding. 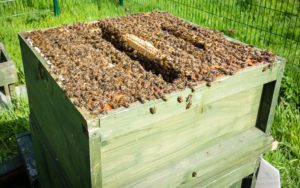 Notes on concentrating the bees … 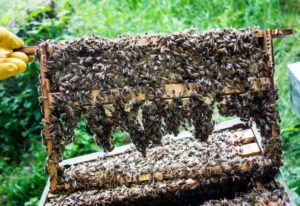 What’s happening … ? In the first 24 hours the bees in the upper box start the cells using the emergency response. If the grafts are accepted and the slide is removed the cell raiser will then use the supercedure response to complete the cells. This generates better fed and therefore higher quality queens. It’s important to check the other frames for unwanted queen cells. If these emerge first – perhaps because they were started from older larvae – they’ll slaughter your queens. The latter should emerge 12 days after grafting so should be distributed to colonies for mating 10 days after grafting. 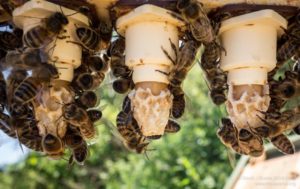 † If you don’t want to graft larvae you can simply add a frame of eggs or very young larvae in place of the cell bar frame (in stage 4 of ‘Raising the queen cells’ above). Source these from a colony with the characteristics you want in the same way as you’d select larvae for grafting. Ideally this frame should be of relatively fresh wax as it’s then easier to be re-shaped to draw out queen cells. Once these are ready they can be cut out of the frame and added to mating nucs.

Additional instructions on using a Cloake board can be found – inevitably – on the late Dave Cushman’s site and in Queen Bee: Biology, Rearing and Breeding by David Woodward.

6 thoughts on “Cloake board queen rearing”