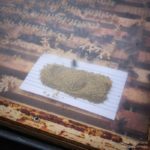 Usually by this time of the year I’ve got a reasonable idea of how the season will unroll. I’ll know how many colonies are looking strong coming out of the winter. I’ll be planning to boost the colonies (usually about now) that are closest to the oil seed rape with thin syrup and pollen to maximise the colony build up and honey yield. Finally, I’ll have an idea of how many colonies I’ll be selling off (usually as nucs) and so need to replace during the course of the coming season. The vagaries of the weather will slow things down or speed things up, but broadly things can be expected to proceed much as they’ve done over the last few years. 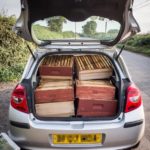 Room for a couple more

But 2015 is going to be very different as I’m moving to Fife in Scotland. In addition to the usual house selling, house buying, new job, removals etc. I’ll be moving all of my beekeeping activities in about the middle of the season to a small village about 20 miles from St. Andrews. This has necessitated a major rethink of the beekeeping year, with the emphasis on having the majority of my colonies ready to move in late July.

I’m still at the planning stage but am currently intending to do some or all of the following:

The intention is to move nucs in time for them to be well established, putting the very strong ones into full hives before the season ends, with the rest being overwintered for 2016.

How many is sufficient? 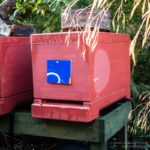 I usually have 8-12 production colonies, depending upon the time of the season, the amount of queen rearing I’ve done and the number of swarms that have generously been contributed by neighbouring beekeepers. However, I also need bees for my day job and need to significantly expand my work apiary. So ‘sufficient’ is probably somewhere between 12 and 24 nucs, the upper number possibly defined by the amount I can readily (and safely) accommodate in a van to move north.

I’ve transported nucs from Scottish islands to the Midlands before now, so the move back north shouldn’t be a problem. With a suitable travel screen (most of which I’ll have to build this spring), a van and a cool night it’s a straightforward procedure. It’s certainly a lot less backbreaking than moving full colonies, particularly when they’re piled high with supers. I wouldn’t make the journey in really hot weather or when there might be heavy traffic – although you can spray colonies with water through the travel screen, the high temperatures that occur due to lack of airflow need to be avoided to prevent over-stressing the bees.

It’s always a reassuring sight to manhandle the nucs into the new apiary in the early dawn of a summers day and seeing the first few bees exploring their new environment.

An alternative to all this would be to leave full colonies here until the end of the season, then return to collect them. By July the swarming season is pretty-much over so they are reasonably self-contained. With clipped queens and sufficient supers it should be possible to leave the bees to get on with things while I move, returning to collect them in early/mid September. However, the workload in doing this is considerable … 12+ full colonies, 36-48 (hopefully) full supers and a large number of robust hive stands. The prospect of securing a dozen or more colonies for transport together with supers containing perhaps hundreds of pounds of honey is a bit worrying. I realise this is second nature to many who practice migratory beekeeping, but they’re presumably set up with the necessary trailers, straps and experience … most of which I lack. 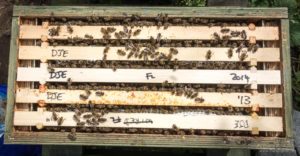 There may yet be other options … whatever, it promises to be a very different beekeeping season.

5 thoughts on “The year in prospect”