After two weeks of mites, their diets and pedantry we’ll take a break this week for some practical beekeeping.

Or at least as close as you can get to practical beekeeping when it’s been as cold as -8°C.

Midwinter is a time to prepare for the season ahead, to stock up on new equipment during the winter sales, build more frames, plan the strategy for swarm control and think about stock improvement.

And – if you’re anything like as disorganised as me – it’s also the time to tidy up after the season just finished.

Which is what we’ll deal with today.

The original research apiary and bee shed is now under an access road for a new school. Fortunately, we managed to rescue the shed which has now been re-assembled in the new apiary.

In the longer term these sheds could together accommodate at least a dozen full colonies. However, in the shorter term it has allowed me to rationalise the storage, giving much more space to work with the colonies in the larger shed. 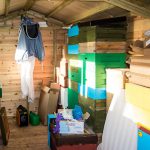 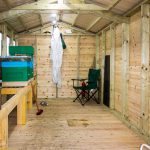 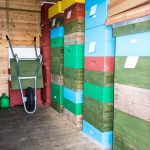 Supers and brood in the storage shed have all been tidied (see below) and are in labelled stacks ready to use. The other side of the store contains stacks of floors, split boards, clearers and roofs.

It’ll get messier as the season progresses, but it’s a good start.

I also spent a couple of weekends making some minor improvements to the bee shed following the experience last season.

The lighting has been increased and repositioned so it is ‘over the shoulder’ when doing inspections. On a dull winter day it is dazzlingly bright 1 but I fear it will still not be enough. I’m looking at creating some reflectors to direct the light better.

I’ve also used a few tubes of exterior sealant to block up all the holes and cracks around the edge of the shed roof. Last season was a bad one for wasps and we were plagued with the little stripy blighters.

Two of the most valuable resources a beekeeper has are drawn super frames and capped stores in brood frames.

I often end up uniting colonies late in the season, but then overwinter the bees in a single brood box. This means I can end up with spare frames of sealed stores. These should be protected from wax moth and mice (or anything else) as they are really useful the following year for boosting colonies that are light on stores or making up nucs.

Drawn supers can be used time and time again, year after year. They also need to be protected but – if your extraction is as chaotic as mine – they also usually need to be tidied up so they are ready for the following season.

I load my extractor to balance it properly, rather than just super by super. Inevitably this means the extracted frames are all mixed up. Since frames are also often drawn out unevenly this leaves me with a 250 piece jigsaw with billions of possible permutations, but only a few correct solutions. 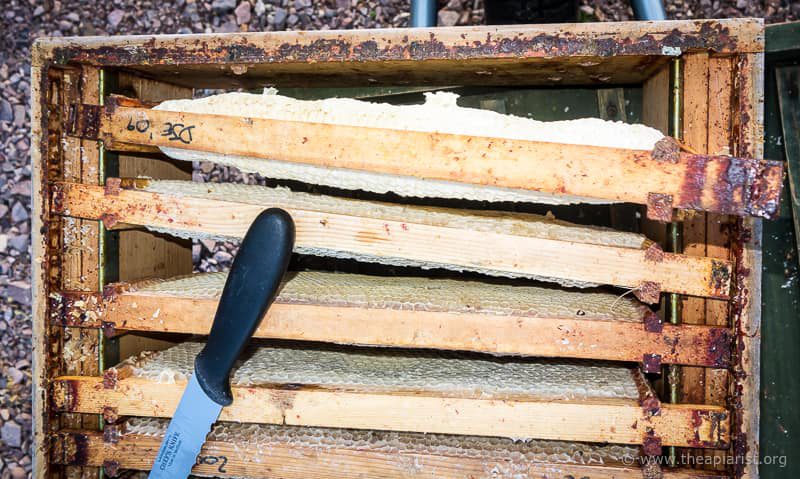 Little and large – untidy frames and a breadknife

And that’s ignoring all the frames with brace comb that accumulate during a good flow.

So, in midwinter I tidy up all the cleared super frames, levelling off the worst of the waviness with a sharp breadknife, removing the brace comb, scraping down the top bar and arranging them – 9 to 11 at a time 2 – in supers stored neatly in covered stacks.

And, if you’ve got a lot, label them so you know what’s where.

An hour or two of work on a dingy midwinter day can help avoid those irritating moments when – in the middle of a strong flow – you grab a super to find it contains just five ill-fitting frames, one of which has a broken lug. 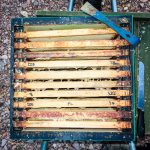 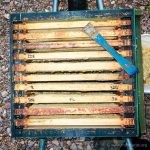 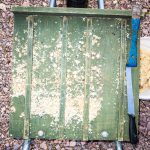 The wax removed during this tidying up is usually lovely and white. Save it for making soaps, cosmetics or top-quality candles.

Brood comb has a finite life. After about three years of repeated brood rearing cycles it should be replaced. Old comb contains relatively little wax but what’s there can be recovered using a solar or steam wax extractor. This also allows the cleaned frames to be re-used.

Processing a few dozen brood frames with a solar wax extractor during a Scottish winter is an exercise in futility. For years I’ve used a DIY steam wax extractor which worked pretty well but was starting to fall apart. I therefore recently took advantage of the winter sales and purchased a Thorne’s Easi-steam 3. 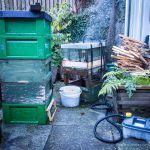 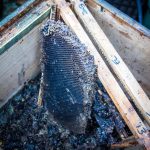 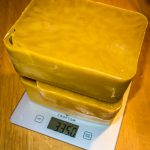 The Easi-steam works well and with a little further processing generates a few kilograms of wax for making firelighters or trading in … and a large stack of frames for re-use.

Remember to keep a few old dark brood frames aside for using in bait hives.

Keep an eye on your bees

In between all these winter chores don’t forget to check on your bees.

There’s not a lot to do, but these checks are important.

Make sure the entrances are clear, that the mouse guards 4 are in place and that the roofs are secure.

Storm Eric brought us 50-60 mph winds and a couple of my hives lost their roofs. These had survived a couple of previous storms, but the wind was from a different direction and lifted the roofs and the bricks stacked on top. I got to them the following day but we’ll have to wait until the season warms up to determine if there’s any harm done. Finally, as the days lengthen and it gets marginally warmer colonies should have started rearing brood again. Make sure they have sufficient stores by regularly ‘hefting‘ the hive. If stores are low, top them up with a block or two of fondant. This should be placed directly over the cluster, either over a hole in the crownboard or on the top bars of the frames.