During irregular midwinter visits to the apiary you need to check if the hive entrances are clear and to determine whether the colony has sufficient stores for the remaining winter. The rate at which stores are used depends upon the number of bees in the colony, the strain of bees, the temperature and whether they’re rearing brood or not.

The easiest way to ‘guesstimate’ the level of stores is to gently lift the back of the hive an inch or two, and to judge the effort required. Beekeepers call this ‘hefting‘ the hive. Colonies should feel reassuringly heavy. After all, you’re only actually lifting half the weight of the hive – the front remains on the hive stand – and if that feels light it might indicate a problem.

The hive will be full of torpid bees on a freezing cold winter day. On really cold days the wooden floor of the hive might actually be frozen onto the stand. Don’t force it and jar them. And if you can gently lift one side, don’t just drop the hive back onto the stand afterwards. Ideally you want to judge the weight of the colony without the bees being disturbed at all. 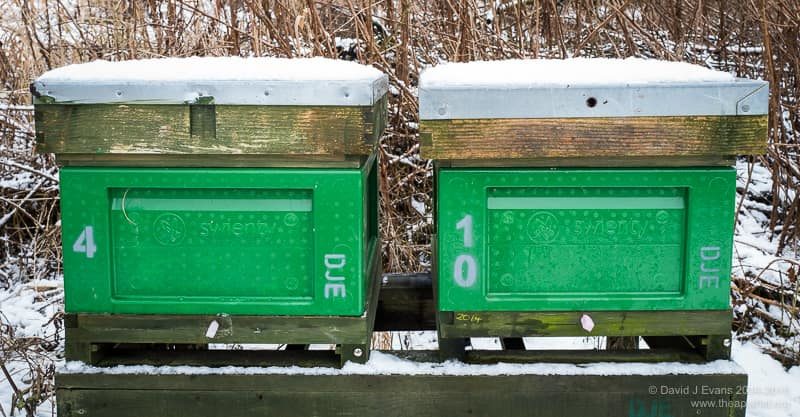 However, judging the weight takes experience. Is it a lot less than last week? Is it less than it should be? In the picture at the top there are 5 hives, only two of which (those on the closest stand, and above) are comparable. You can’t easily compare hives if you have only one or if they’re not made of the same material.

But that doesn’t mean you shouldn’t try. Over time you will get experience for what feels OK, and what feels a bit light.

Technology to the rescue

You can get a much better insight into changes in the weight of a colony by, er, weighing it. Luggage weighing scales are widely available, cheap and accurate. With a little ingenuity you can fashion a means of attaching them to the side of the floor. I drilled a 6mm hole through the side runners of the floor and securely tied an eye bolt to some strong polypropylene attached to the scales. 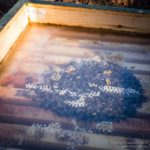 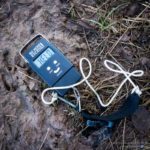 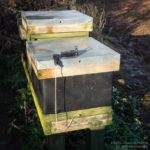 In a similar way to hefting a hive, lift each side carefully, but this time note the weight and add them together. It’s helpful to use scales which automagically record the maximum stable weight. Note the weight down in your hive records and see how it compares over time.

As before, be gentle with these colonies in winter. Don’t go bouncing them up and down. The bees will not appreciate it. With care you can weigh the colony and barely disturb them at all.

What? You want even more accuracy and even less work? Look at the hive monitoring equipment from Arnia, SolutionBee or others. These use under-hive scales hooked up to a mobile phone to upload weights (and lots of other data) for analysis from the comfort of your armchair.

Different strains of bees use their winter stores at different rates. ‘Black bees’ (Apis mellifera mellifera, or Amm) are well known for being frugal. In contrast, some Italian strains chomp through their stores like there’s no tomorrow (and if you don’t feed them, there won’t be).

My Heinz strain 1 of locally-reared bees exhibit variation in the amount of stores they use. The two comparable hives on the same stand in the top picture both started the winter packed with stores. By Christmas one of them remained reassuringly heavy, whereas the other one was feeling light and was given a fondant supplement.

All things being equal, I’d prefer my bees use less rather than more. When the time comes to rear queens later in the season the thrifty colony will be favoured.

Some beekeepers take a harder line than this … if a colony can’t store enough to get it through the winter they let it starve and so allow ‘natural selection’ to operate.

I’d prefer to have the luxury of an additional colony in Spring. I won’t rear queens from it and I’ll minimise drone brood to prevent it contributing to the next generation. Instead, I’ll build it up in the spring and then split it for nucleus colony production in late May or early June.

Unnatural selection perhaps, but it’s a solution I’m comfortable with.

Given the choice, I suspect it’s what the bees would prefer as well 😉 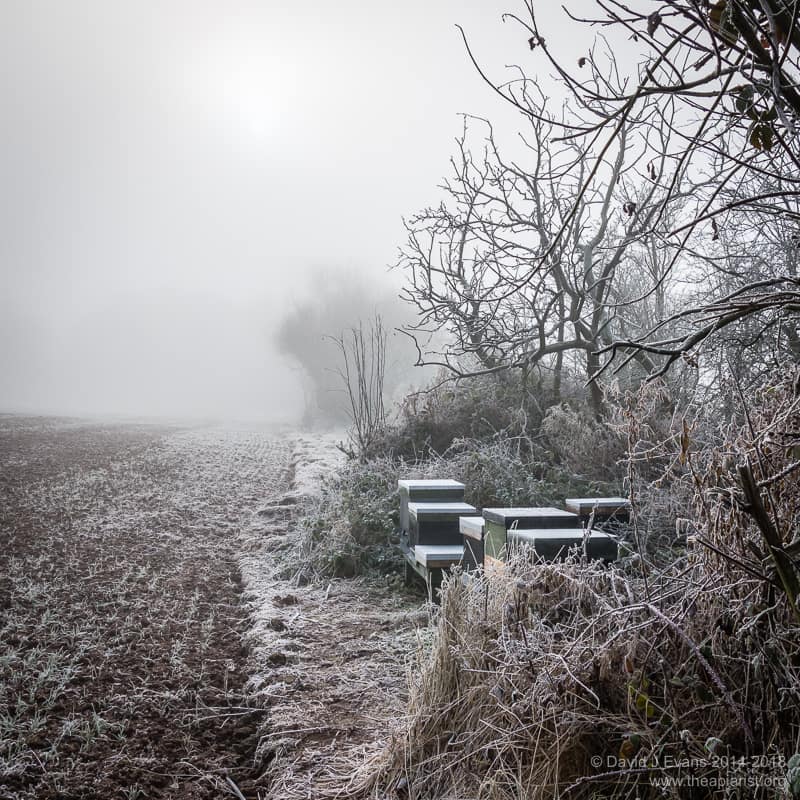