Brace yourselves. There’s some heavyweight science this week.

I’m going to discuss a very recent publication 1 on vaccinating bees against parasites and pathogens.

The paper involves a whole swathe of general concepts many readers will have some familiarity with – vaccines, immunity, infections, parasites, the gut microbiota 2 – which, because the paper is about bees, bear little recognisable relationship in the details.

And the devil is in the detail.

The paper appears to offer considerable promise … but I’ll return to that later.

To start with, let’s begin with measles.

Measles is a virus. It is highly contagious – typically being transmitted by coughing or sneezing – and causes a characteristic rash. Complications associated with measles infections – pneumonias, encephalitis and other respiratory and neurological conditions – are responsible for a case fatality rate of ~0.3% in the USA, or up to 30% in populations that are malnourished or have high levels of immune dysfunction. 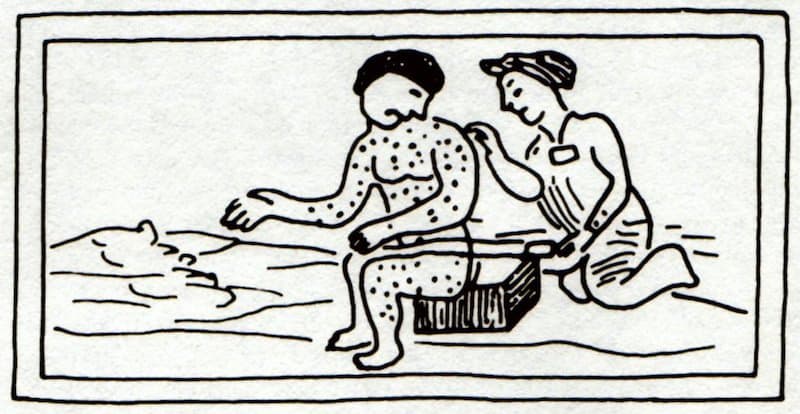 The measles vaccine is excellent. It is an attenuated (weakened) strain of the virus that is injected. When it replicates it produces all of the measles virus proteins. These are not naturally found in the human body, so the vaccinee 4 recognises them as foreign and produces an immune response that eventually stops the vaccine growing.

This immune response is effectively lifelong.

One important component of the immune response are antibodies. These are proteins that specifically recognise the measles virus, bind to it and lead to its destruction.

If you’ve been vaccinated (or have survived a previous infection) and subsequently get infected your body produces lots of antibodies which destroy the incoming strain of the measles virus, so protecting you (but this immune response is very specific … the response to measles does not protect you from poliomyelitis or coronavirus or mumps.).

The point about the stuff on measles was to introduce the principles of a protective immune response.

It has several characteristic features, including:

In humans, all of the above are provided by antibodies 6.

Bees don’t have antibodies, but they do have an immune response which has all of the characteristic features listed above.

The immune response of bees uses nucleic acids 7 which are common chemical molecules found in the bodies of all living things. Specifically bees use ribonucleic acid (RNA) that interferes with the nucleic acids of invading pathogens.

To make ribonucleic acid (RNA) that interferes easier to say it is abbreviated to RNAi 8.

RNA is made up of individual building blocks called nucleotides. There are four nucleotides, with names abbreviated to A, C, G and U. These join together in long strands e.g. ACGUUGUGCAG … the order (or sequence) of which has all sorts of important biological functions we don’t need to worry about for the purposes of vaccinating bees.

Pairs of nucleotides in different strands have the ability to bind together – A binds to U, G binds to C or U. Individually, these bonds are weak. When lots occur close together they are much stronger and therefore very specific.

For example, the sequence ACGUUGUGCAG binds very well to UGCGACGCGUU. In contrast, it binds very much less well to CGUUAGCAUUG (just count the vertical bars which indicate each of the weak bonds between the nucleotides in the two strands. The left hand pair bind tightly, those on the right do not).

Finally, these short RNAs interfere when they bind very well to their target sequence.

What does that mean?

In the cartoon above, imagine the text in red represents the RNAi and the text in blue represents part of the RNA genome of deformed wing virus (DWV), the most significant viral pathogen of honey bees 9.

The specific binding of RNAi to its target sequence recruits enzymes that result in either the destruction of the target, or the impairment of its functionality.

RNAi binding to DWV results in the inactivation and eventual destruction of the virus genome.

Before we get on to vaccinating bees I have one final thing to explain.

How does the bee ‘know’ it is infected with DWV (or a similar viral pathogen) and how is the RNAi actually made?

OK, that’s two things, but they’re actually closely related to each other.

I said earlier that our bodies recognise the proteins that the measles virus (or vaccine) produces as ‘foreign’ i.e. something not normally present in the body. It turns out that many organisms – including bees – have evolved specific ways of detecting double stranded RNA as a ‘foreign’ entity.

Double stranded RNA (dsRNA) is made when RNA viruses replicate, but it is never normally present in the cells of a healthy bee. Therefore if the bee detects dsRNA it ‘knows’ it is infected and it induces an immune response … specifically an RNAi-mediated immune response.

The dsRNA is recognised by a protein called Dicer which cuts up the double stranded RNA into smaller duplex RNAi molecules, one of the pair of these then associates with additional proteins (including Argonaute; Ago 10) to form the RNA induced silencing complex (RISC).

RISC, which includes the RNAi, binds to the specific target e.g. the genome of other DWV viruses, and chops it up and destroys it. 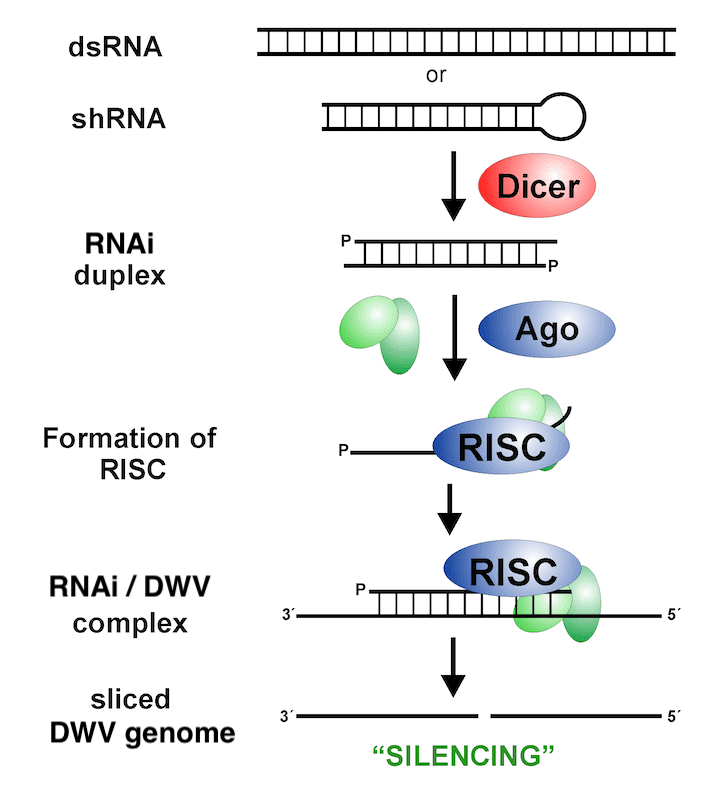 The mechanism of RNAi-mediated silencing

Finally, because RNAi is a small molecule it can easily move from cell to cell. So RNAi made in one cell can move to regions of the bee some distance away.

Phew … OK, that’s the end of the whistle-stop introduction to RNAi and insect immunity 11.

It’s been known for some time that you can directly introduce RNAi into bees and reduce the levels of some of the viruses present.

Frankly the data on DWV has not been great, but there are reasonably compelling studies of reductions in Israeli Acute Paralysis Virus (IAPV) levels and even field trails showing benefits at the colony level.

In these studies you either inject individual bees with RNAi, or you feed them large amounts of sugar syrup containing huge amounts (in value) of RNAi.

Neither of these routes is practically or financially viable.

Injecting individual bees takes a very long time 12. You need to anaesthetise the bee with CO2 or by chilling it on ice. It’s pretty tough on the bee and not all survive the anaesthetic or the injection. You need good lighting, good eyesight and a very small needle. It’s obviously a non-starter.

What about feeding? Syrup feeding is incompatible with honey production. It’s also a rather inefficient way to deliver RNAi. RNA is a very sensitive molecule. It is easily damaged. If it has to sit around in syrup for a few days, get collected by the bee, stored in the honey stomach, regurgitated and passed to another bee etc. there’s a risk it will be inactivated.

And it’s very expensive to produce …

Which in a really roundabout way brings us to this recent study by Leonard et al., published at the end of January in the prestigious journal Science

The concept is relatively simple, but the science is pretty cool.

The bacterium sits around in the honey bee gut producing DWV-specific RNAi. If the bee gets infected – through feeding or injection, for example by Varroa – the RNAi (which has diffused around the body of the bee) is ready and waiting to ‘silence’, through RNA interference, the replicating DWV genome.

The bee remains healthy and happy 13.

But there’s more … Snodgrassella alvi is presumably passed from bee to bee during feeding (of larvae or adult workers). Therefore the RNAi-expressing version should naturally spread through a colony, protecting all the bees. In addition, because it is present throughout the life of the bee, a genetically engineered form of the bacterium should provide the longevity that is characteristic of a protective immune response.

So, does it work?

The paper includes lots of introductory studies. These include:

I’m going to return to some of these points in a future post (this one is already too long) as there are both promising and disturbing features buried within the data. 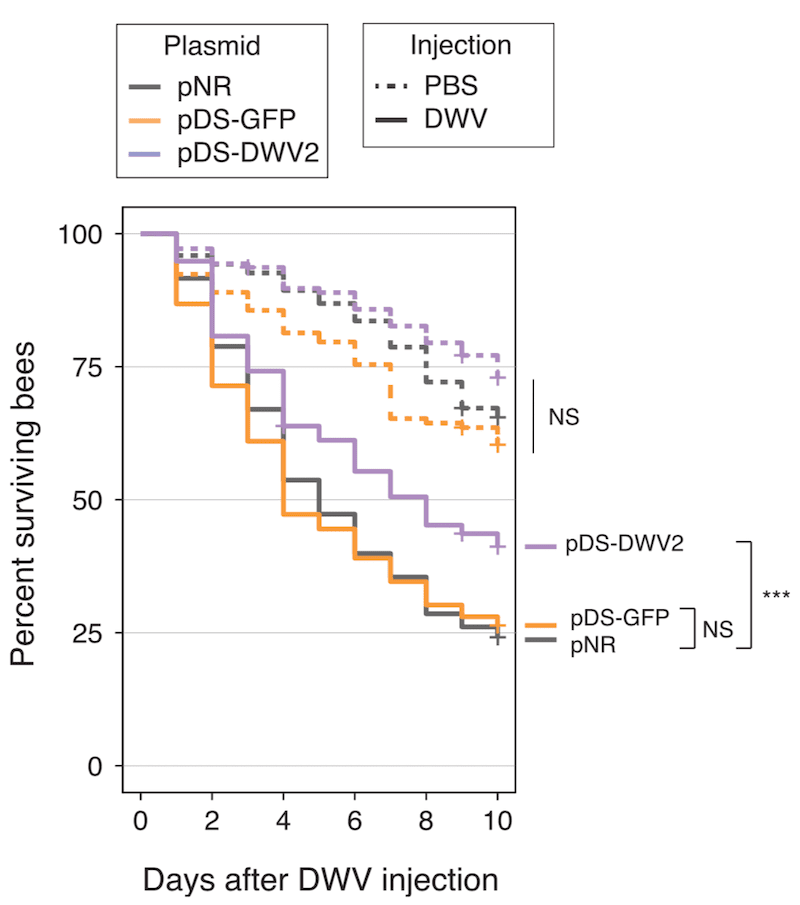 Seven day old adult worker bees were fed with S. alvi expressing RNAi to DWV or to an irrelevant target (GFP). Seven days later some were injected with DWV (solid lines in the graph above), others were injected with buffer alone (dashed lines).

In the 10 days after injection about 25% of the bees injected with buffer died. This reflects the ageing of the bees and the attrition rate due to handling in the laboratory.

About 75% of the bees ‘vaccinated’ with S. alvi expressing GFP RNAi or no RNAi died after DWV challenge over the 10 day period.

In contrast, only ~60% of the S. alvi bees expressing DWV-specific RNAi died. This is a relatively small difference, but – because the experiment was conducted with lots of bees – is statistically significant.

The results presented above are promising but the authors also explored the logical extension of this work.

If the RNAi produced by the engineered S. alvi becomes widely distributed in the honey bee, perhaps it also could also taken up when Varroa feeds on the bee?

In which case, if you engineered S. alvi to produce Varroa-specific RNAi’s, perhaps this would help kill mites. 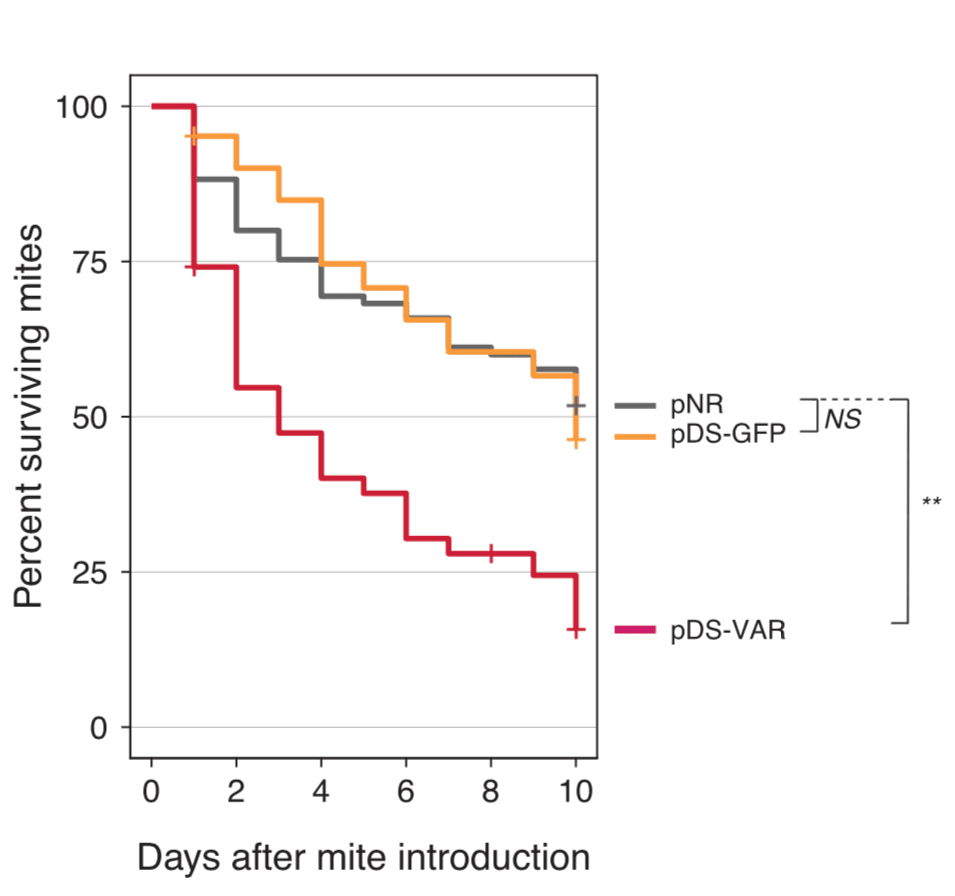 Again, this is encouraging.

Yes, at the moment, only encouraging.

Don’t get me wrong, this is pretty fancy technology and the results represent a lot of very laborious and elegant experiments.

At 2100 words this post is already too long … so here are a few things to think about which help justify my qualified enthusiasm for the paper.

I’ll post a follow-up in the next few weeks to discuss some of these in further detail.