Stressed bees trapped inside a hive generate large amounts of heat which can result in the comb melting and collapsing. If you are moving colonies any distance, for example between distant apiaries (or even nearby apiaries if it’s a warm day), it is really important to provide ample ventilation to the hive. 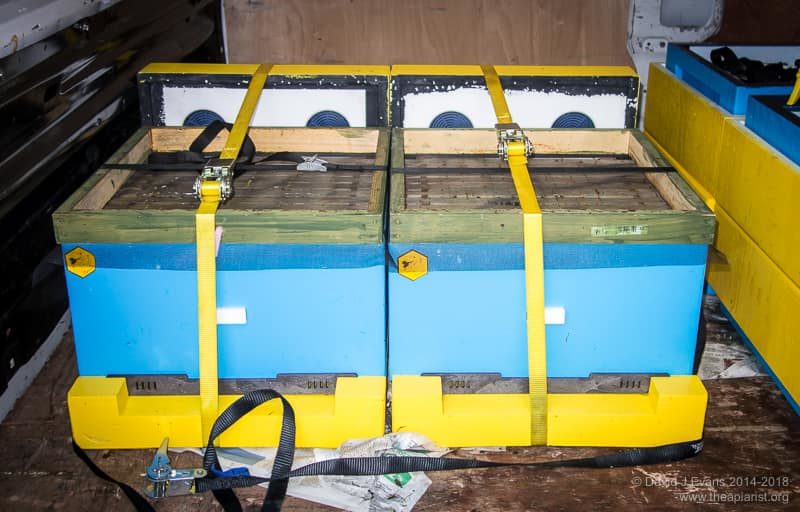 The usual way to do this is to use travel screens. These consist of a wooden-framed metal mesh which is used in place of a crownboard. With a sealed entrance, an open mesh floor and a travel screen, the hive is securely and safely closed up for transport, but air still can circulate freely. On long journeys or particularly hot days (which can be avoided by moving bees at night) water can be poured or sprayed through the mesh travel screen to further aid cooling of the colony. 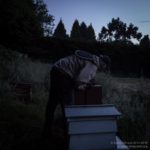 I often end up moving colonies in midsummer, either distributing splits to new apiaries or taking my strongest colonies to good areas of forage to exploit the summer flow. Colonies are strapped up during the day and moved either very late in the evening or very early the following morning. This timing ensures that all the flyers are back before sealing the hive and that colonies are moved during the coolest part of the day. In June in Fife this means after 10pm or before 4am if the weather is good.

Nevertheless, despite my moving hives annually, the travel screens would only be in use for a few hours a year. The rest of the time they are simply in the way.

For this reason I don’t use wooden-framed travel screens. I’m not prepared to pay the £15-17 the commercial suppliers charge for something that will languish on top of a stack of supers in storage for almost the entire year.

Instead of framed travel screens I use fibreglass insect mesh (search eBay for that phrase and choose the cheapest – I bet they’re all the same). This is very strong and hardwearing, relatively inexpensive and available by the roll or in a range of sizes. It’s easily cut with strong scissors and you can therefore prepare customs sizes for full hives or nucs. I cut the mesh a few centimetres oversize to allow it to be securely attached to the hive.

I bought mine from eBay a few years ago. Current prices work out at about £1.25 a hive depending on the quantity ordered. It’s usually cut for you from a 1.2 metre wide roll and sold by the metre. Each metre gives you four National-sized travel screens and some offcuts.

Colonies in transit should be securely strapped – both together and to stop the hive moving in the event of an accident. For full hives I use straps and an eke to hold the mesh in place. 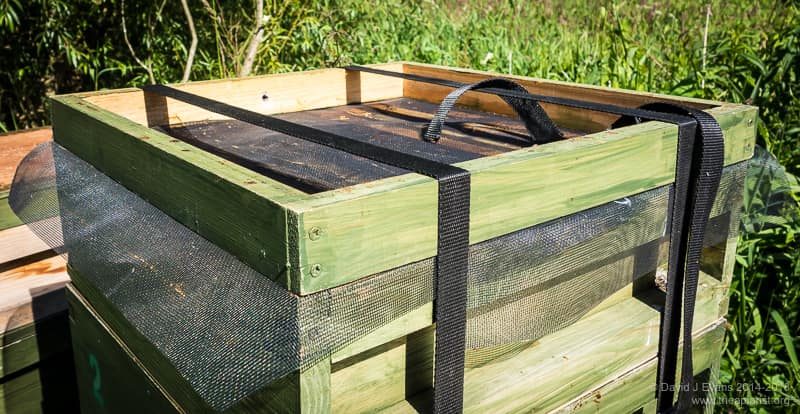 For nucs, or when I run out of ekes, I staple the mesh in place to keep it secure. 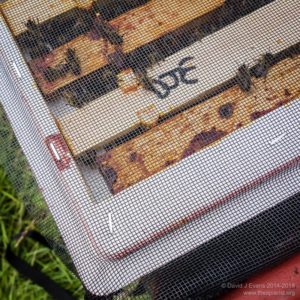 The mesh is similar to the stuff sold by Thorne’s to collect propolis (at over £3 a sheet). If left in place for a long period the bees will start to seal the holes up. If you want the propolis put the mesh in a bag in a freezer and scrunch it up to release the frozen propolis.

While we’re on the subject of transporting hives it’s worth mentioning that the frames must be aligned with the direction of travel. If they’re not, there’s a danger that bees will be crushed as the frames move with the acceleration and deceleration of the car.

You also need to prevent the frames from moving laterally. In a National box, unless heavily propolised, there’s usually space for 11 frames and a dummy board. However, that still leaves a bit of additional space.

On a long journey or on rough roads these can shiggle apart. This causes two problems. Firstly there’s a chance that bees will be crushed as the frames swing from side to side. Secondly, since you won’t be opening the top of the hives immediately upon arrival (the bees need to reorientate rather than have their roof unceremoniously whipped off after the long journey) there’s a chance the bees will build brace comb in the gaps. 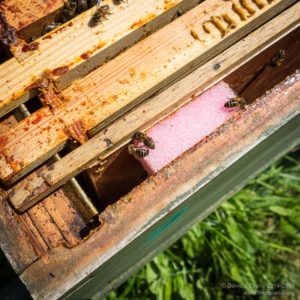 I use closed cell foam blocks wedged tightly into the gap between the dummy board and the side wall – one on each side in line with the side bars of the frames. This keeps everything stable and the blocks can be removed when you first inspect the colony after moving. With nucs, where there’s less to move about, or with very inflexible dummy boards, you can get away with a single block wedged tightly half way along the top bar. 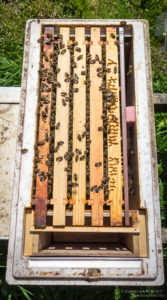 If you use Langstroth-sized nucs with integral feeders (like the Thorne’s Everynuc) to allow National frames to fit then it helps to also nail a cross bar over the feeder to stop the frames shifting backwards and forwards during transit.