There’s something both vaguely amusing and deeply repellent about hive and bee thefts.

Vaguely amusing in terms of the way the press cover it and possibly in the way it’s perceived by the general public. The latter have visions of beesuited ‘rustlers’ rounding up ‘herds’ of bees and making off with them in the dead of night. The press do little to alter this perception, generally stressing the large number of individual bees stolen in articles littered with beekeeping gaffes.

The deeply repellent aspect of honey bee thefts is that most must be carried out by beekeepers.

Handling bees in large numbers is a daunting prospect for most of the general public. Even the most light-fingered ne’er-do-well is likely to think twice about making off with a 40 litre box packed with stinging insects.

It requires specialist knowledge and equipment … or, in their absence, tener cojones as the Spanish say.

Bee and hive theft is not like a ned1 stealing a smartphone and flogging it at a car boot sale … it’s more like a surgeon being involved in organ trafficking.

Whether to make up for their own beekeeping inadequacies or simply to make a quick profit, this type of ‘inside job’ is an unsavoury reminder that some – hopefully a very few – ‘beekeepers’ have criminal tendencies and cannot be trusted.

Prepare to be amused

“Rustler steals 40,000 bees in Britain’s biggest hive heist in years” is a recent headline in The Guardian. The article describes the theft of a single hive (presumably gold-plated as it’s valued at £400, though perhaps this price reflects the fact that it’s the ‘biggest’ hive) from a ‘ditch’ in Anglesey, blaming the recent increase in bee thefts on the spiralling cost of ‘nukes’ (sic).

The Daily Mail announces that bee hives are stolen and sold for up to £8,000 a time, and helpfully illustrate the article with a picture of a bumble bee (almost certainly a male) and the caption “Some queen bees are worth £180 …”.

I can’t help but think that the emphasis on the ‘value’ encourages some of the thefts. After all, what else valued at £400 (or £8000 for that matter) do you know about that’s left unattended and unlocked for days at a time in a remote corner of a farmer’s field.

As an aside, The Daily Mail obviously don’t realise that some breeder queens sell for a lot more than £180 …  😯

It’s not really clear from the Daily Mail article (above) whether it was one or many hives that were stolen. However, since many apiaries will contain multiple hives, it’s not unusual to have the entire lot vanish.

Another poorly punned headline from The Telegraph announces “Britain’s biggest bee sting: One million insects stolen from Oxfordshire hives”, choosing to emphasise the total number of insects, rather than the 40 hives that went missing.

Pedantically, the hives and  the bees were stolen … they didn’t just take the bees, though that happens as well as will soon become clear.

But, as with so many other things, you need to go across the Atlantic to experience the biggest bee and hive thefts. The scale of commercial beekeeping operations in the USA means that there’s added incentive and opportunity. Two ‘beekeepers’ were charged in 2017 with the theft of 2,500 hives (no need to count the bees this time, hive numbers alone were sufficiently impressive) worth almost $1M.

Hives were stolen from apiaries at night, spirited away on a flatbed trailer and moved to an isolated location where they were repainted. “It looked like a chop shop for bee hives,” Fresno detectives said.

The Oxfordshire bee heist was of overwintering hives in a field that “couldn’t be seen from the road”. As I’ve previously discussed, obscurity does not guarantee security.

High resolution satellite imagery is increasingly available and it’s easy to find apiaries. While preparing this post I looked at Google and Bing maps of an apiary I know well. It is effectively invisible from public roads or the adjacent football pitch. 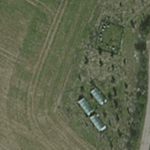 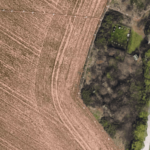 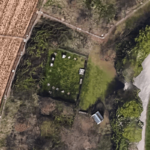 The satellite images are taken at different times 2, so aren’t identical. The first two images are at about the same scale. The three white rectangles in the Bing maps image are poly tunnels, each about 5-6 metres long. The regularly-spaced hives are pretty obvious.

The image on the right is the current enhanced Google maps view, in this individual hives can clearly be counted. You can even discriminate between paving slabs with hives on stands and those that are unoccupied.

A thief could spend a few winter evening scanning these sorts of satellite images and easily identify likely apiaries, whether they can be seen from the road or not.

I’m going to write more extensively in the future about deterring thieves as there’s a more important topic to cover here.

You can place hidden cameras near the apiary (to catch a thief … or obvious ones to deter). There are now ways of installing GPS-trackers in hives. These trigger a remote alarm if moved. You can ‘label’ equipment and make it uniquely traceable using SmartWater-like solutions.

Alternatively you can consider physical deterrents, like simply screwing the hive floor to the stand (from inside the hive). It’s unlikely the thief will have spare floors. I’ve heard of people plugging a hole through the hive floor with a bung, the latter firmly attached to the hive stand. The thief places the hive in the back of the estate car and … you can imagine the rest 🙂 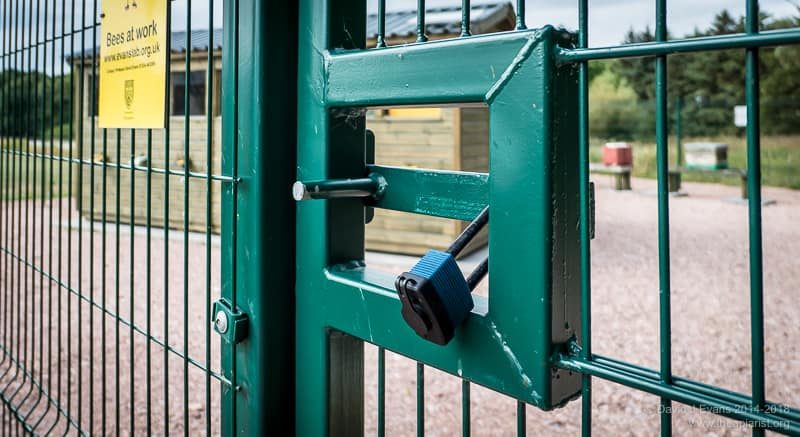 Or just use an enormous fence and a big padlock.

For reasons outlined in the opening paragraph I suspect the majority of these thefts are by beekeepers or – as Martin Smith of the BBKA puts it – “beekeepers or at least those with a rudimentary knowledge of the craft”.3

A recent theft announced on the Sottish Beekeepers Association interactive forum (SBAi) clearly emphasises the involvement of beekeepers. Here are the relevant bits of the post:

… Came across a set of plainly disturbed hives near Dundee today whilst doing heather prep[arations]. These were double deep hives with brood in 12 to 15 bars, plenty food and pollen, but were being robbed. Almost no bees, no queen, no q.cells, brood in all stages inc eggs, combs not back in correct order …

Shook swarms plainly been removed from them.

Conducting shook swarms on large double brood colonies is unlikely to be the work of someone with just a rudimentary knowledge of the art. Done properly, it involves first finding and caging the queen, then shaking all the bees off all the frames. It’s hard work and to someone unused to working with lots of bees it would be a daunting undertaking.

The SBAi post author suggests that the likely fate for those bees is to be split into nucs and sold on to unsuspecting beekeepers. It’s really a bit late in the season … remember that you should ideally only buy nucs with at least 2-3 frames of brood in all stages from the queen in the box 4.

However, beginners desperate for bees who don’t purchase from a known and trusted source are unlikely to be worrying about the quality of the bees they buy.

I never knew there was so much in it …

But those beginners purchasing nucs are possibly getting more than they bargained for, as is clear from the rest of the post on the SBAi:

The bad news for the thief is that this apiary has had EFB [European foulbrood] earlier in the summer and is still under a standstill order, and one of the hives shaken was the one next to the (removed and destroyed earlier) EFB case. This must be considered a super high risk bit of theft ………… so if you are offered bees by an unknown source in the area be very very careful.

It’s not really bad news for the thief … but it is for the purchaser, or potentially for anyone in the area (or outside the area) who keeps bees and may now get a potentially EFB-infected colony5 in the garden next door 🙁

Ironically, great advances have been made recently in molecular fingerprinting of foulbroods to determine transmission pathways. This is similar to the DNA fingerprinting that can unambiguously link a person to the scene of a crime. It should soon be possible to definitively demonstrate the EFB in that dodgy nuc you bought from the bloke in The Crooks Arms public house was from bees stolen from an apiary ‘near Dundee’. 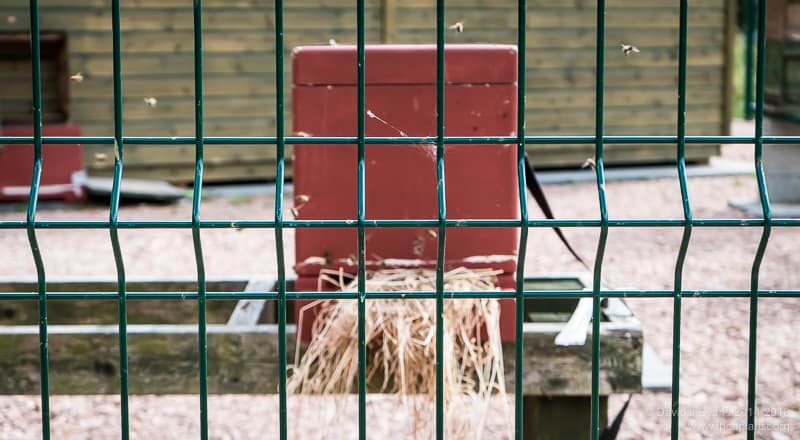 That’s a doubly sour note to end on. One or more beekeepers must have been involved and it could result in the further spread of EFB.

It’s been a great summer for bees. Many experienced beekeepers will likely have an excess of bees at this time of the season. The usual high demand for nucs in early Spring has probably all been met. However, there will still be people wanting to start beekeeping.

It is this group of novices that might end up buying a poorly balanced nuc of stolen bees with a side order of EFB.

If you do want to buy bees6 then:

Get some training, get a mentor and get some help with the purchase.

The title of this post is an obvious bee-flavoured concatenation of a well known insult that “strikes hard at one’s personal integrity and social standing, both, in an economy of words”.

The simpler concatenation to B’Stard was used by the late Rik Mayall as the surname of his character (Sir Alan Beresford B’Stard) in The New Statesman, a late-80’s sitcom satirising the then Conservative Party government. B’Stard would stop at nothing to fulfil his megalomaniac ambition. He was “selfish, greedy, dishonest, devious, lecherous, sadistic, self-serving”.

It strikes me that most of these terms could also be applied to bee rustlers.