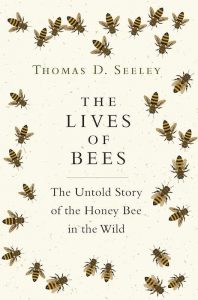 The Lives of Bees

The untold story of the honey bee in the wild by Thomas D. Seeley, Professor of Biology at Cornell University.

Well, not quite untold, but this is a highly informative and entertaining book about the biology of honey bees living wild, primarily in the Arnot Forest, near Ithaca in the Finger Lakes region of New York.

Thomas Seeley conducts simple, elegant experiments to address interesting or important questions about bees. He then presents the studies and the conclusions in an easily understandable form, unencumbered by statistical mumbo-jumbo or extensive caveats and qualifications.

This makes the work very accessible, even for those with no scientific training. You don’t even need extensive knowledge of honey bees; he explains the background to the experiments in sufficient detail that they are comprehensible without lots of prior knowledge.

For this reason, this is an ideal book to introduce a new beekeeper to the biology of bees.

However, for reasons to be covered separately, I think the suggestions it makes on practical beekeeping is very poor advice for the new beekeeper 🙁

Essentially the book is in three parts, divided into eleven chapters.

After a general introduction there are three chapters that provide a historical perspective to the bees in the Arnot Forest and, more generally, to beekeeping. Not the practical aspects of beekeeping, but the interaction of humans and bees over tens of thousands of years. 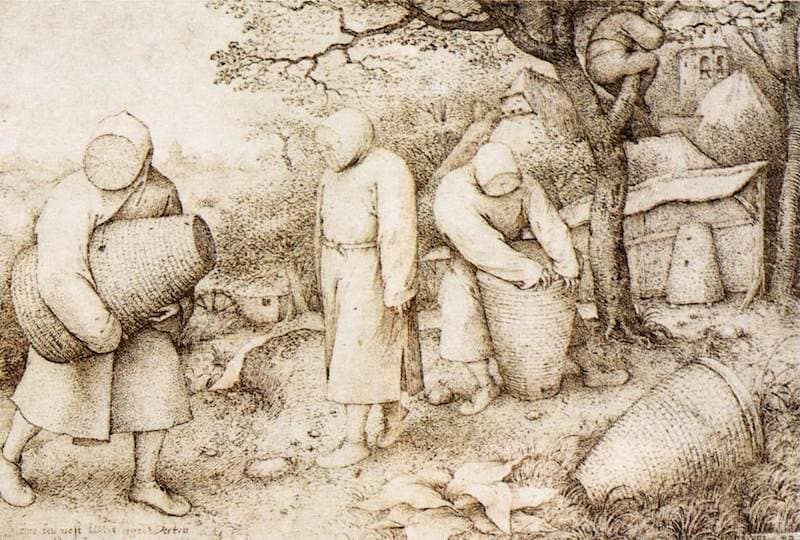 The Beekeepers and the Birdnester by Pieter Bruegel (c. 1568)

Chapters 5 to 10 cover key aspects of the biology of the colony. These are:

The final chapter – Darwinian beekeeping – contains Seeley’s suggestions for changes to beekeeping practice, informed by the observations presented in the six preceding chapters.

I’ll discuss Darwinian beekeeping another time as it deserves a post of its own.

Each chapter is accompanied by a couple of pages of explanatory notes and there is a 19 page bibliography should the reader want to consult the primary sources.

An interested lay person could spend hours enjoyably reading about the biology of wild-living honey bees without ever consulting the notes or references. These don’t litter the text, making the book very much more accessible to those unused to the sort of cite-every-statement-to-avoid-offending-the-peer-reviewers style of writing that plagues most reviews (Bloggs et al., 1929b).

Alternatively, if you really do want to find out the original source you usually can, by consulting the notes and the references. Inevitably some things are missed, but that’s the nature of an eminently readable tome covering about a million years of Apis mellifera biology, 4500 years of beekeeping and at least 300 years of scientific observations about bees.

One of the great aspects of Seeley’s writing is that things are often presented with reference to some long-lost study which would otherwise have been forgotten.

Seeley presents his data on colony weight changes but does so with reference to Clayton Farrar’s study of brood rearing by colonies lacking pollen in the 1930’s. These used only half as much of their stores because brood rearing needs pollen. Farrar’s study was published in the American Bee Journal in 1936.

There are several examples in the book where modern molecular studies are juxtaposed with some of the great observational science of the first part of the 20th Century. As someone involved daily at the gene-jockey end of science, this historical perspective alone makes the book worth purchasing.

Throughout the book Seeley focuses on bees living in the wild i.e. without intervention from beekeepers. His contention is that it is only by studying bees in their natural habitat that we’ll be able to properly understand what they need to survive and thrive when managed.

Seeley has studied bees in the Arnot forest for at least 40 years. He can therefore provide a ‘before and after’ view of the impact of the introduction of Varroa which probably occurred in the early 1990’s. Surprisingly, the overall number and density of colonies living in the forest in the 1970’s is about the same as it is now. This is discussed in several places in the book.

How can wild bees cope with the mites that, uncontrolled, generally destroy a hived colony within a year or two? His explanations of this is the underlying thread running through much of the book and the primary topic of the final chapter.

Are bees domesticated? This topic gets an entire chapter of its own. The genetic changes that species undergo during domestication 1 are not seen in honey bees.

Although perhaps not ‘domesticated’, through environmental manipulation we have significantly changed our relationship with bees. We now determine the size of the colony (or at least the space it has). By moving or manipulating the hive we influence what it produces (e.g. propolis, Royal Jelly, heather honey). We also control whether or not it reproduces. Indeed, most beekeepers try to stop their colonies reproducing (swarming) as it results in the loss of bees, and honey.

Throughout the book comparisons are made between the choices ‘wild’ bees make and the choices made for them by beekeepers. For example, the thermal conductivity of the hives used by beekeepers compared with a nest in a tree trunk.

The strapline on the front of the book indicates that this is the untold story of the honey bee in the wild.

In reality it’s not.

More accurately it’s a very readable compendium of studies published by Seeley and others over the last century or so.

But that’s hardly going to make copies of this £25 book fly off the shelves, so ‘untold’ it is.

In fact, several aspects of the biology of the wild-living honey bee will be familiar to readers of this site. I’ve covered studies by Seeley in discussion of bait hives, drifting, robbing, polyandry and mites in swarms. A quick search turns up ~25 posts in which he gets a mention.

In addition, anyone who is fortunate enough to have already read Honeybee Democracy will be familiar with many bits in the chapter that cover nest site selection. Similarly, the bee lining methods used to locate nests in the Arnot forest have been described in exhaustive detail in his previous book Following the Wild Bees.

Don’t let this put you off.

Honeybee Democracy takes ~250 pages to describe in exhaustive (but still entertaining) detail how swarms choose new nest sites. This topic, together with all sorts of fascinating stuff on comb building and propolis, takes just part of the 40 page ‘Nest’ chapter of The Lives of Bees. 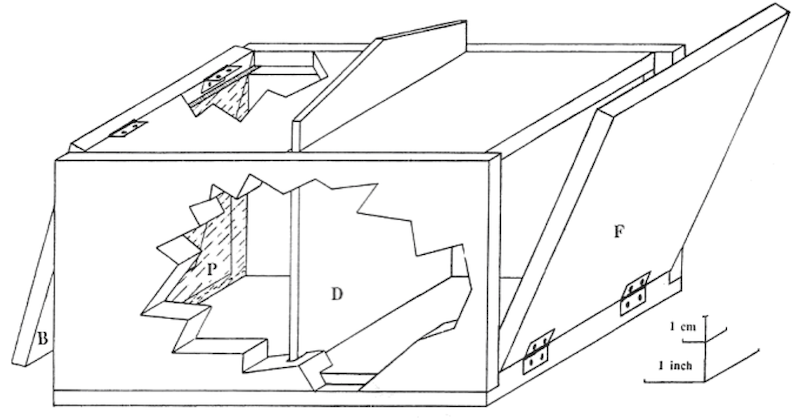 Similarly, the mechanics of bee lining don’t really get described in the new book, but the wild-living nests discovered using this method feature throughout.

But be aware that, in addition to a comprehensive account of how bees live in the wild, there’s an agenda here as well.

The sleeve notes (does anyone really read these?) include the words ” … and how wild honey bees may hold the key to reversing the alarming die-off of the planet’s managed honey bee population”. 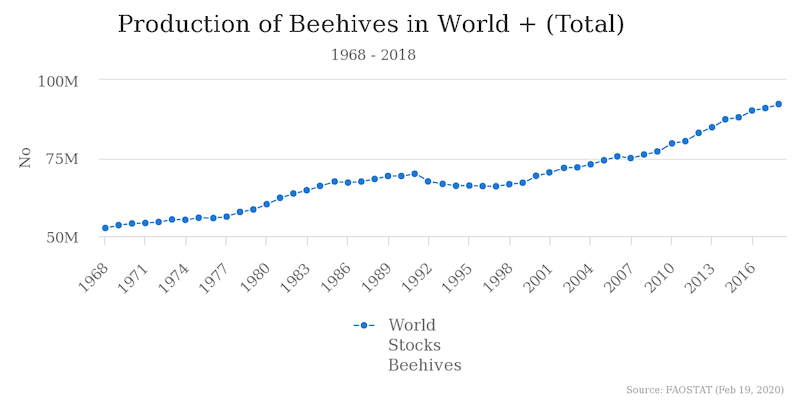 What alarming die off?

The graph above is of the global total of beehive numbers over the last 50 years or so. During this period the number has increased by ~1.7 times.

Of course, there are more beekeepers over the last 50 years (and the global population has more than doubled). This increased number of beekeepers are having to work harder to maintain (and increase) the stocks they manage.

But increasing they are … 2

It is therefore both inaccurate and an oversimplification to claim that there’s an alarming die-off in honey bee colonies.

Perhaps the sleeve notes are just to help boost sales?

Something a bit spicy to entice the browser to think that the book they are holding contains the ‘untold’ secrets to ‘saving the bees’?

Save the bees … save humanity

It’s not the first time ‘Save the bees … save humanity’ has been used as a marketing ploy 3. Here’s a graphic I regularly use to introduce my talks on rational Varroa control. 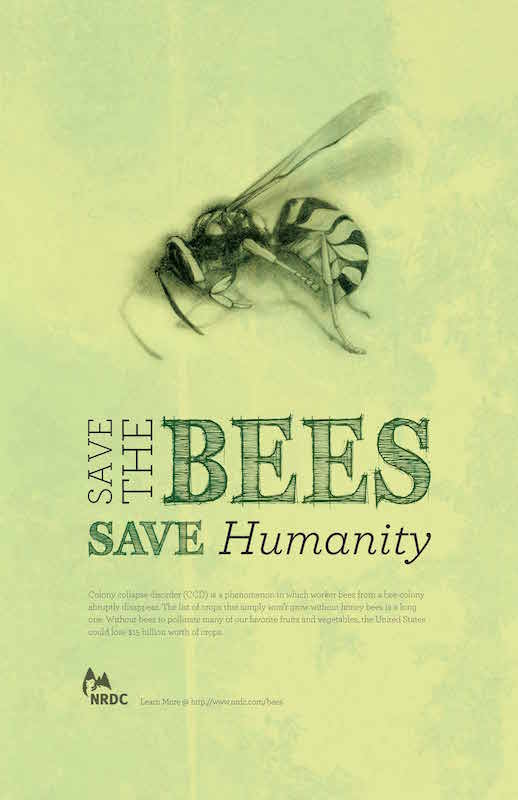 Pity the image is of a wasp 🙂

Again, don’t let these minor errors in the sleeve blurb put you off.

Whatever the relevance to practical beekeeping (or reversing the “alarming die-off”), the first ten chapters provide the best overview of the lives of wild-living honey bees written by an acknowledged master of science communication.

I read a lot of stuff about honey bees, for work and pleasure.

The Lives of Bees had a wealth of information I was unaware of.

Buy it, or borrow it from your library … you won’t be disappointed.

10 thoughts on “The Lives of Bees”