Or … why it’s good practice to clip the wing of the queen.

After a cool start to May it’s now (s)warmed up nicely. Colonies are piling in nectar, mainly from the OSR, and building up really strongly.

It’s at times like these that vigilance is needed. A skipped inspection, a missed queen cell, and the season can go from boom to bust as 75% of your workforce departs in a swarm.

Not the entire season … but certainly the first half of it.

All beekeepers lose swarms … but should try not to 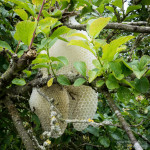 At least, all honest ones do 😉

However, I can think of at least four reasons why it’s pretty shoddy beekeeping practice to repeatedly lose swarms 1.

And you get less honey 🙁

Regular inspections help prevent the loss of swarms. But it’s good to get all the help you can.

Here’s a brief account of two recent events that illustrate the differences between swarms from colonies with clipped queens or unclipped queens.

Swarm in an out apiary

I have an out apiary in a reasonably remote spot containing half a dozen colonies. I keep my poorly behaved bees there 🙂 There are other apiaries in the area as the forage is good.

I went to inspect the hives at the end of April. This was only the second inspection of the year. On arriving I found most colonies were very active, but one was suspiciously quiet.

Thirty metres away there was a swirling mass of bees settling in the low branches of a conifer.

My three initial thoughts were “Aren’t swarms a great sight?”, “Dammit, they shouldn’t have swarmed!” and “Perfect timing, where’s the skep?”. 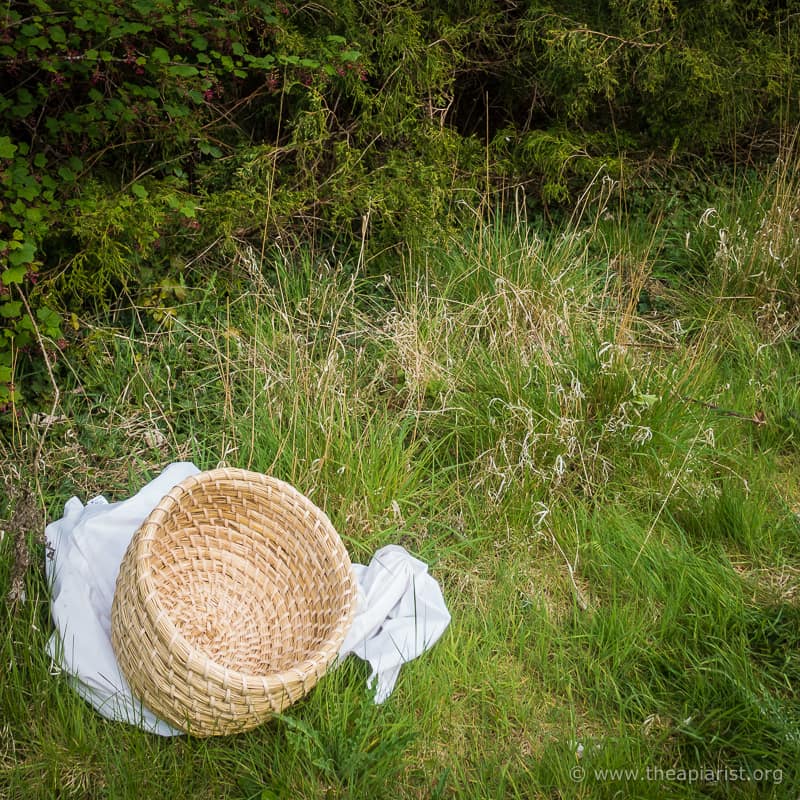 The skep was in the car. It usually lives there during the swarming season. The bees were spread over two or three branches, all drooping under the weight. After a bit of gardening I managed to drop the majority of the bees into the upturned skep 3.

I inverted the skep over a white sheet laid out on the grass and propped one side up using a bit of wood.

The air was full of bees. While I busied myself inspecting the lively (in more ways than one 😉 ) colonies, the swarm gradually started to settle into the skep.

There were lots of bees exposing the Nasonov’s gland at the end of the abdomen, fanning frantically at the entrance to the upturned skep. This is a pretty certain indication that I’d managed to get the queen into the skep.

An hour later I’d finished all but one inspection – the quiet colony – it was beginning to get cool and the light was fading.

I could no longer see eggs, not because there weren’t any but because I’m not an owl.

The swarm still needed to be hived so I left the quiet colony until the following day, wrapped the skep in the sheet and took it to another apiary.

And then the temperature plummeted. For the following week the daytime highs barely reached double figures. Nighttime temperatures were low single digit Centigrade.

The swarm would likely have perished and had a virgin queen emerged in the ‘quiet hive’ she’d have not got out to mate.

I didn’t look in another hive until the 7th, but when I did I got a surprise.

The ‘quiet hive’ contained a marked laying queen. I’d requeened this colony late in 2018 and my notes were a little, er, shambolic 🙁

I’d not recorded whether the queen was clipped and marked (the usual situation), marked only (not entirely unusual) or clipped only (not unknown!).

Whatever, they hadn’t swarmed after all 🙂

They were quiet because they had a high Varroa load with overt signs of DWV infection. Mite and virus levels in late September had been checked and confirmed to be very low. Presumably the mites had been acquired by drifting or robbing late in the season 4.

A swarm in my home apiary

I arrange my hives with the frames oriented ‘warm way’ 5 and inspect them standing behind the hive to avoid returning foragers. 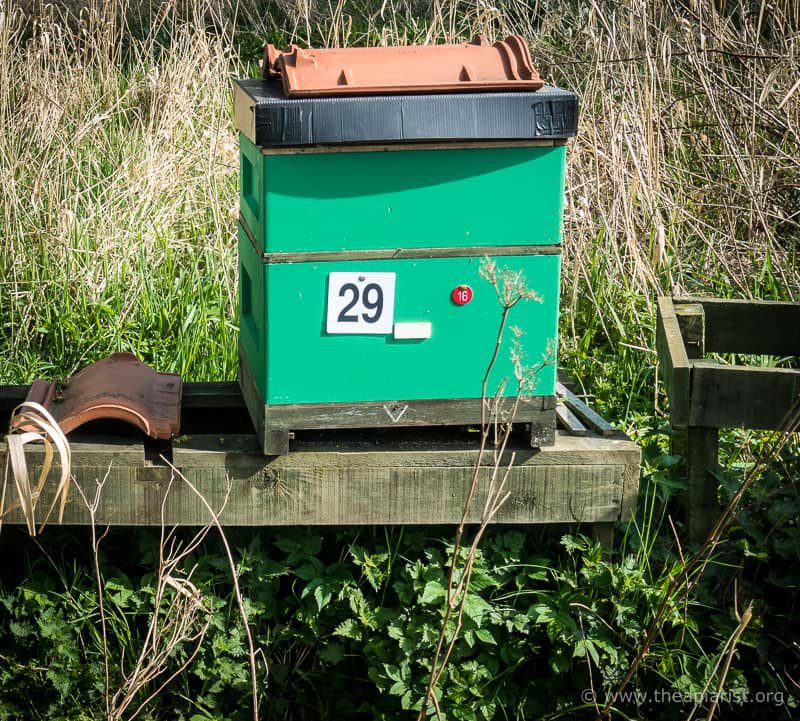 Earlier this week I noticed a few bees flying under the DIY open mesh floor (OMF) from behind one hive. It’s not unusual to have bees at knee height during inspections but since all I was doing was dropping a nuc off in the apiary I didn’t give it much more thought.

Later in the week I returned to do the weekly inspection.

There were more bees going underneath the hive.

With a bit of effort I peered under the floor to find a 5cm deep slab of bees almost entirely filling the space under the OMF.

Better notes means you know what to expect

My notes were much more comprehensive this time 😉

I knew that the colony had a 2018 white marked and clipped queen.

I removed the supers (which were reassuringly heavy) and quickly inspected the brood box.

Lots of bees, lots of sealed brood, some late-stage larvae but no eggs.

In addition I could see two queen cells … one sealed and one about 3-4 days old, unsealed and with a fat larva sitting in a thick bed of Royal Jelly.

It was pretty obvious what had happened.

The colony had swarmed 6 but the clipped queen, being unable to fly, had crashed to the ground in a very unregal manner, climbed back up the hive stand and sheltered under the OMF. The swarm had then clustered around her.

They had probably been there for a few days.

I placed a new floor and brood box next to the swarmed colony, with the entrance facing the ‘back’. I removed the swarmed brood box and, with a sharp shake, dumped the entire slab of swarmed bees from underneath the OMF into the new hive.

Before adding back all the brood frames I peered into the box as a tsunami of bees started moving from the floor up the side walls.

There! A white marked clipped queen 🙂

You’ll now have a better chance of finding and keeping her if they swarm.

I assembled and closed up the new hive and put the swarmed hive back in its place. I then carefully went through every frame checking for queen cells again.

There were only two. I destroyed the sealed cell. I didn’t know how old it was and couldn’t be certain it contained a developing queen.

In contrast, I could ‘age’ the unsealed cell (3-4 days) and knew it contained a larva and copious amounts of food.

I prefer to know when a queen emerges rather than save a few days by leaving the sealed cell. I only generally leave one cell to prevent casts being lost.

There were very young larvae in the colony. It is therefore possible the bees could generate more queen cells in the next day or so. Since I know when the queen will emerge I can check the colony before then and destroy any further cells they generate.

As far as this beekeeper (and I hope the bees 7) is concerned both swarms had a satisfactory outcome.

A number of lessons can be learned from events like these:

It’s relatively easy to find unmarked queens in smallish colonies early in the season. It’s a lot harder to find them in a strong colony in mid-May. 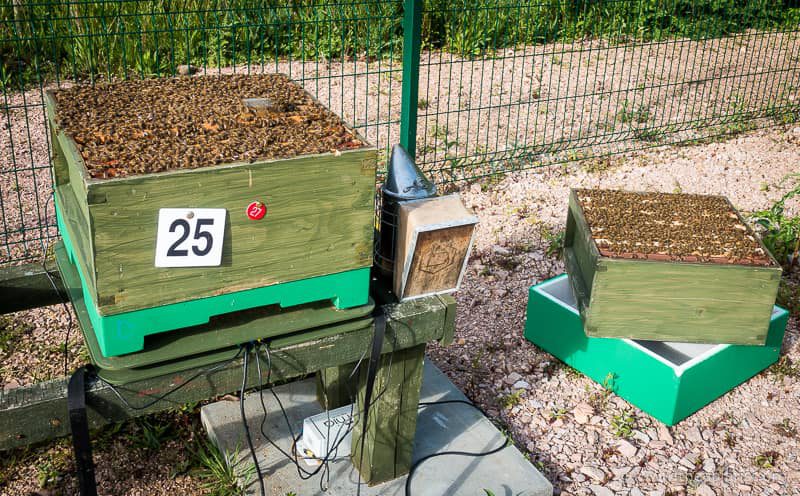 But it’s worth finding her, marking her and clipping one wing.

17 thoughts on “A tale of two swarms”