Apivar is a widely used acaricide (a pesticide that kills mites and ticks) used to control Varroa.

The active ingredient of Apivar 1 is amitraz, a synthetic chemical discovered and developed almost 50 years ago.

Amitraz has multiple molecular targets. I previously discussed the mechanism of action and summed it up with the words:

Essentially, amitraz binds and activates receptors that are critically important in a range of important aspects of the Varroa activity and behaviour … amitraz changes [this] behaviour and so exhibits miticidal activity. It has additional activities as well … these multiple routes of action may explain why resistance to amitraz is slow to develop.

I made the point in a subsequent post that amitraz resistance was very well documented … in cattle ticks 2 but that there was only anecdotal or incompletely documented evidence of resistance in Varroa in the USA, Argentina and Europe.

Amitraz has been used for mite control in honey bees for over twenty years. Considering its widespread use, the concentrations it is used at, and the relatively high replication rate of Varroa it is surprising that there has not been better evidence of resistance.

But that is no longer the case 🙁

Do you want the good news or the bad news first?

I’ll discuss the key results of this paper first and then make some general comments on the implications for beekeepers and beekeeping.

The study had three components:

Essentially it involved harvesting live Varroa from colonies by a large-scale dusting with icing sugar 4. The Varroa were then tested to determine whether they showed resistance to amitraz, and the sensitivity was compared with the baseline sample of mites from colonies never treated.

Finally, an Apivar sensitivity test was conducted to determine the proportion of mites killed in a standardised assay in a set time period, again compared with the control (baseline sample).

The results of the study

You should refer to the paper for the primary data if needed.

Not all the apiaries tested yielded sufficient mites to screen for Apivar resistance. This is part of ‘the good news’ which I’ll get to shortly … but first the science.

Of those apiaries that did, Apivar resistance (determined by LC50 – the Lethal Concentration required to kill 50% of the mites) ranged from similar to that seen in the baseline samples to ~20-fold greater than the controls.

Two apiaries had an over 10-fold increase of the resistance ratio (the observed LC50 divided by the baseline LC50), with some individual colonies having high levels of Varroa infestation despite an active application of amitraz.

Apivar kills mites very quickly. Using a known number of mites trapped in a cage with a single small square of Apivar it is possible to ‘count the corpses’ and plot a kill curve over time. Sensitive mites from the control colonies were all killed within 3 hours. 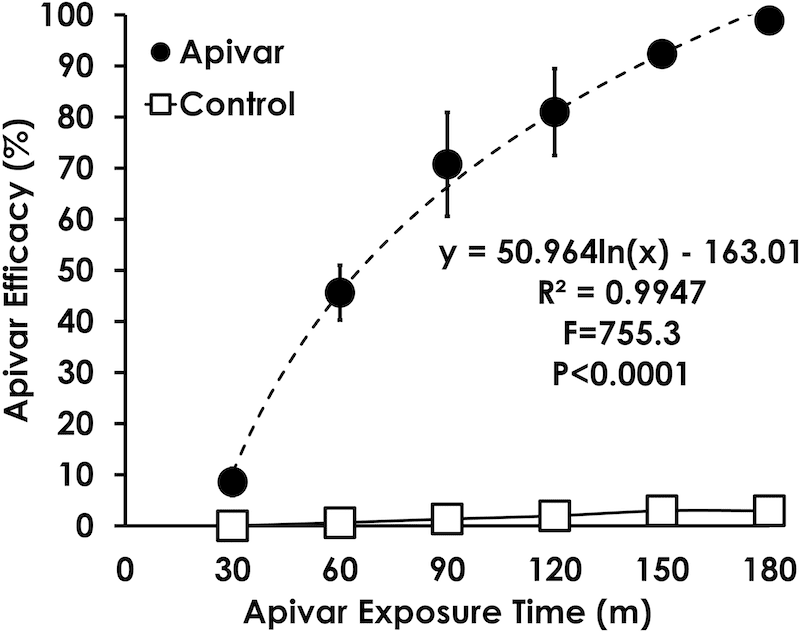 Using this as the baseline control it was then possible to determine the efficacy of Apivar in killing the mites (in the same 3 hour timeframe) from apiaries exhibiting resistance. 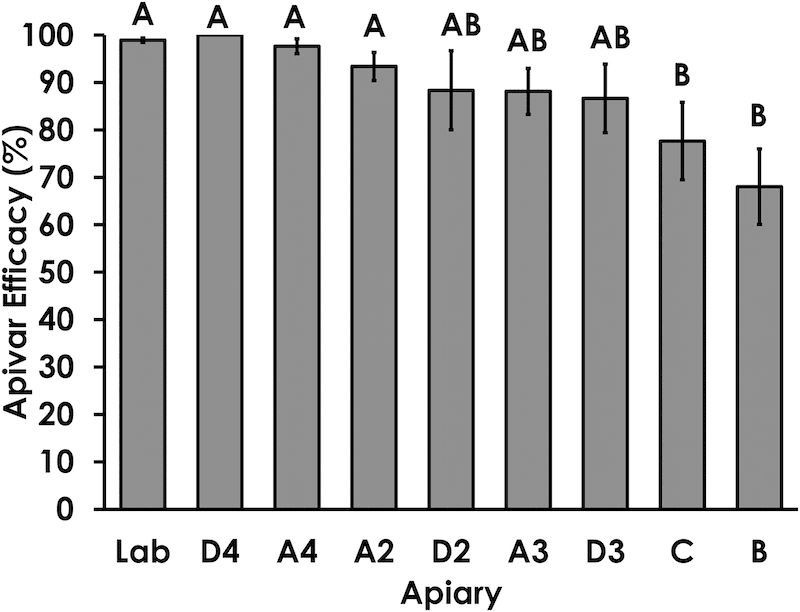 Two apiaries (B and C, above) contained mites that exhibited high levels of resistance to Apivar, reflected in a low level of Apivar efficacy (above). In these apiaries, an average of less than 80% of mites were killed within the 3 hour assay.

Finally, the author demonstrated a correlation between Apivar efficacy and amitraz resistance. Unsurprising, but a necessary concluding point for the experimental data.

It was interesting that the author notes that the range of Apivar efficacy was much greater in colonies from apiaries with clear evidence of amitraz resistance.

For example, apiary B exhibited a range of Apivar efficacy in colonies from 28% to 97%, with an average (plotted above) of 68%. Whilst this is clearly an unacceptably low level, it is interesting that some of the colonies within the same apiary had mites killed at an efficacy similar or better (>90%) to apiaries A2 and A4 in the graph above.

I’ve re-plotted the primary data of Apivar efficacy vs. mite counts from individual colonies to emphasise this point. 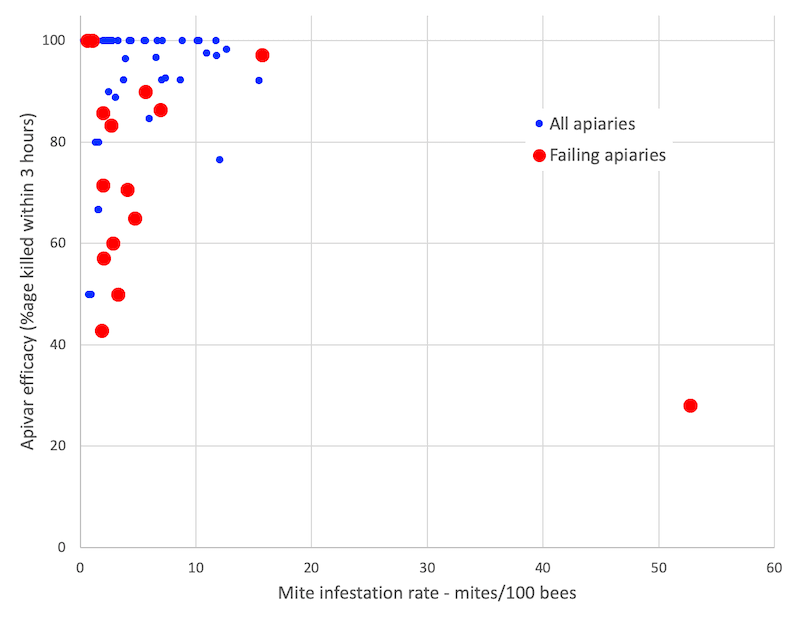 Apiaries B and C (red markers) could be considered as ‘failing apiaries’ as the average Apivar efficacy of each was below 80% (see bar chart). Together the average mite load and Apivar efficacy for these two apiaries was 6.75 mites/100 bees and 72% respectively.

However, of the 16 colonies screened from these two apiaries (8 from each):

Clearly the average figures presented in the bar chart above hides a very significant level of within-apiary variation.

I commented recently on the variation in mite levels during midwinter treatment of colonies with OA/Api-Bioxal. I attributed this – with little supporting evidence (!) – to different rates of late-season brood production. Colonies brooding late into the autumn were expected to have higher midwinter mite levels.

However, the variation seen here is different.

With the exception of that one heavily infested colony from apiary B, the mite levels in the ‘failing apiaries’ (B and C) are actually less than the average of the remainder of the study group (3.88 vs. 4.85).

What differs is the efficacy of Apivar treatment, not the resulting mite levels.

Frankly, this is a bit weird … on two counts:

Caveat on the mite counts – Apiaries in Louisiana, New York and South Dakota were analysed in this study. Louisiana apiaries were sampled in April, the others in July and August. I don’t know enough about the climate or mite-replication kinetics in these states to know how much this would have influenced the mite infestation levels (or prior or ongoing treatment regimes, which would also influence mite numbers). Unfortunately, the locations of the apiaries (A, B, C etc.) are not provided, other than the control apiary which is in Baton Rouge, LA. If the study had been done in the UK mite drops in April and August would have been wildly different depending upon the location.

I don’t actually think we have enough information to work with. The paper contains almost no additional background details – Apivar treatment history, use of other treatments, colony loss data etc.

But that won’t stop me speculating a little bit 😉

Do Apivar-resistant mites stop bees from drifting? Probably not, but it would explain why resistance was not widespread in the apiary 5.

More sensibly, perhaps Apivar resistance is detrimental in the absence of selection.

In the colonies in which resistance evolves it gives the mites a significant advantage. The ongoing infestation could encourage prolonged or repeated treatment, so selecting for yet more resistant mites. Eventually the colony succumbs to the resulting high viral load.

In other colonies, treatment is withdrawn (or forgotten … remember, we have zero information here!) and the Apivar-resistant mites are then at a disadvantage to their sisters.

This isn’t unheard of.

Apistan resistance appears to be detrimental in the absence of selection. There are some relatively straightforward molecular explanations for this type of phenotype.

You would have to assume differential colony treatments within apiaries B and C for this to be part of the explanation (and to account for drifting). Let’s hope the colony records are less shambolic than many beekeepers keep 😉

Until a clearer picture emerges of the management history of these colonies all we’re left with is the slightly (or very) confusing observation that Apivar resistance is a hive-specific phenomenon.

As the author states:

This colony level resolution suggests that each colony may act an island of resistance with its own distinct Varroa population. Beekeepers have reported inconsistency in amitraz treatment efficacy among colonies within an apiary and this variation seems to support those anecdotal observations.

And the good news?

I think there are two ‘encouraging’ observations in this paper (though of course I’d be happier if there was no resistance).

And these, in turn, have implications for practical beekeeping.

How does Apivar resistance evolve? Classically, misuse or overuse of treatments results in their eventual failure. Antibiotics are a good example of this.

I’ve been told by commercial beekeepers that some use a half dose of Apivar midseason to knock mite levels back sufficiently for the late season nectar flows. This is a typical example of misuse. It may not result in the development of resistance and it may not be a strategy used by the beefarmers managing apiaries B and C, but it is not the correct way to use Apivar.

What about overuse? Mites still dropping after 6 weeks of Apivar? Go on, slip another couple of strips in for another month or two. An (expensive) example of overuse. 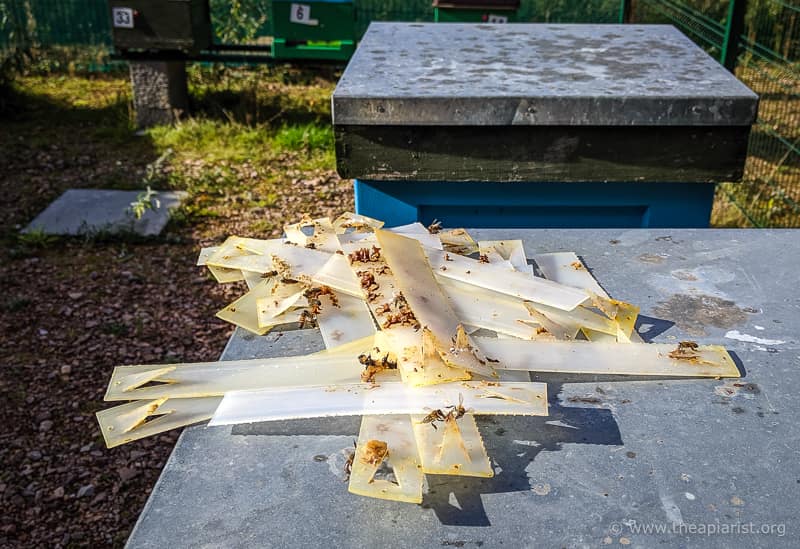 Or what about the Apivar strip found lying on the bottom of the hive at the first spring inspection? Again, overuse as there are likely to be lingering traces of Apivar present in the colony all winter 6.

So the first implication for practical beekeeping is to use Apivar correctly to help avoid the development of resistance. Don’t overdose or underdose, remove after 6-10 weeks, do not leave in over the winter.

Secondly, use alternate treatments to knock back the mite population. This is again a classic strategy to avoid selecting for resistance.

For example, use Apivar in late summer and Api-Bioxal in midwinter.

The mechanism of action of these two treatments is fundamentally different, so resistance to one will not confer resistance to the other (and there are no documented cases of oxalic acid resistance I’m aware of).

If you don’t treat midwinter (and you probably should 7) then use Apiguard one year and Apivar the next. Again, totally different mechanisms of action.

Finally, do not rely on individual colonies within an apiary being indicative of all colonies. I know some beekeepers who only conduct mite drop counts in one colony as a ‘sentinel’ 8.

If the drop is high then treatment is needed.

Or vice versa … no mites, so no treatment needed.

There’s a lot of colony to colony variation so it’s worth monitoring them all 9. And this is probably even more important with the colony level Apivar resistance reported in this paper.

Just something else to worry about … 🙁