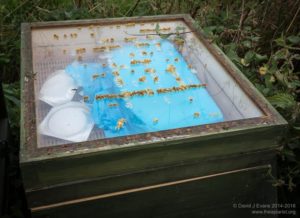 With the season nearly over, now is the time to feed the colonies well and treat for mites so they have the best chance of overwintering successfully. I almost exclusively use fondant blocks for autumn feeding. I prefer feeding fondant to using syrup or Ambrosia for several reasons:

I first heard about autumn feeding with fondant from Peter Edwards of Stratford BKA 1. Most of my colonies have perspex crownboards with an inbuilt eke on one side. The 50 mm gap isn’t enough to accommodate a big block of fondant, but addition of a simple eke from 46 x 22 mm softwood provides sufficient space, and the eke (unlike the Ashforth feeders) is both inexpensive to make and has lots of other uses.

Fondant (often called Bakers fondant) can be purchased from places likes BFP Wholesale who have depots around the UK and offer competitive pricing – particularly if you purchase ten or more 12.5 kg boxes at once. At the very least you are likely to need one 12.5 kg block per colony. Prepare the fondant by cutting a block in half along the long axis. Cover the cut faces with a single sheet of clingfilm (if you don’t do this they ‘fuse’ back together and are tricky to separate again), reassemble the block and put it back in the box for easy transport. 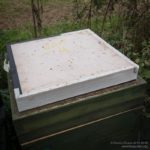 Feeding with fondant is simplicity itself … having removed the supers to extract the honey I leave the queen excluder in place. I add the shallow eke and place the block of fondant with the cut face down on the queen excluder. I replace the perspex crownboard inverted, and balance the insulation block on top, before replacing the roof. You can use an empty super in place of the eke and inverted crownboard but – with luck – they’re all full of frames ready to extract if it’s been a good season. I add Apiguard at the same time, rather than feeding and treating for mites at different times. There’s little late season forage here, so not a lot to be gained from delaying feeding.

The colonies take the fondant down over the next days and weeks. This happens at very different rates. Some of my colonies have already taken at least a quarter of a block (3+ kg) in about a week, with others barely touching it yet. However, by mid-late October I expect most to have emptied the blue plastic bag the fondant is supplied in. I then remove the ’empties’ and the queen excluder on a warm day and wrap the hives in DPM to prevent woodpecker damage. If the bees haven’t finished the fondant it can be left on overwinter, with any remaining being dissolved to make a stimulative 1:1 feed in the spring. Fondant has a long shelf life. If kept wrapped, cool and away from mice it will keep well over a year. 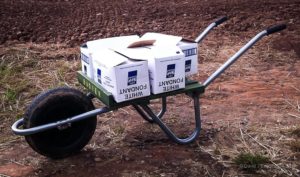 Hivebarrow and 50kg of fondant