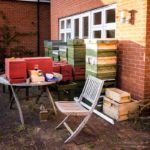 Last week I moved more than a dozen colonies to Fife where I’m going to be living and working from the beginning of August. Due to the vagaries of queen rearing this year this was slightly fewer than I’d intended, but – for one person doing all the heavy lifting – was still a reasonable amount of work and a bit of a logistical nightmare (they were spread over 4 different apiaries and were in three different sized boxes). There was also the large piles of additional boxes – supers, broods, a variety of poly nucs, stands, ekes etc. that needed to make the trip.

Rather than use framed travel screens I simply stapled plastic insect netting across the top of all the boxes. This is available by the metre at a reasonable price and can easily be cut to size with a Stanley knife. I took a variety of boxes – 5 and 8 frame poly nucs and four full Nationals, two of which were on double broods. Some of the nucs were expanding so fast I was moving them up to 8 or 11 frame boxes in the week preceding the move. All were on open mesh floors. 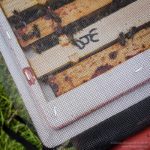 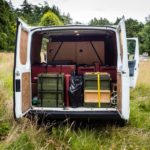 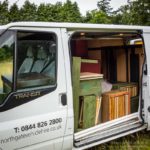 A combination of the incorrect sized van being delivered, a large desk making the same trip and a stack of stands and other equipment – floors, supers, roofs etc. – made for a sort of Rubic’s cube packing puzzle. However, late in the evening everything was aboard and secure, although one colony had to sit on the passenger seat. The near 400 mile overnight journey was straightforward, with a single stop midway. It was a cool evening – one of the reasons for travelling overnight, the other being the “sheer weight of traffic” on the M6 – but I still sprayed water over the mesh tops of the hives in the car park of the Tebay service station at about 2am. 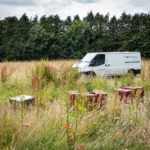 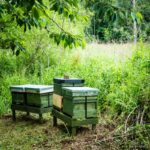 After arriving and a brief nap I arranged the colonies in temporary apiaries. The travel screens worked well and it was an easy job to prise the staples out of the poly nucs. It was less easy on the cedar boxes and I think a better solution would be to hold the mesh in place with a spare eke, strapped down tight, or perhaps simply pin the overhang down round the sides.

Are these local bees or are they imports? They’re not local to Fife, that’s for sure, but they’re a damn sight more local than something flown in from the other side of Europe. Some of my stocks are grafted from larvae derived from Colonsay queens but the majority are mongrels, selected on the criteria important to me; temper, health, steadiness. The climate in Fife isn’t hugely different to the Midlands in terms of overall rainfall, average temperatures etc. It’s a bit cooler and quite a bit windier, so it will be interesting to see how they perform in the run up to winter, and how they build up again for the 2016 season.