By definition the queen excluder should be an impassable barrier for the queen.

“Why not put one under the brood box 1 to prevent the loss of a swarm?”, asks the beginner beekeeper. 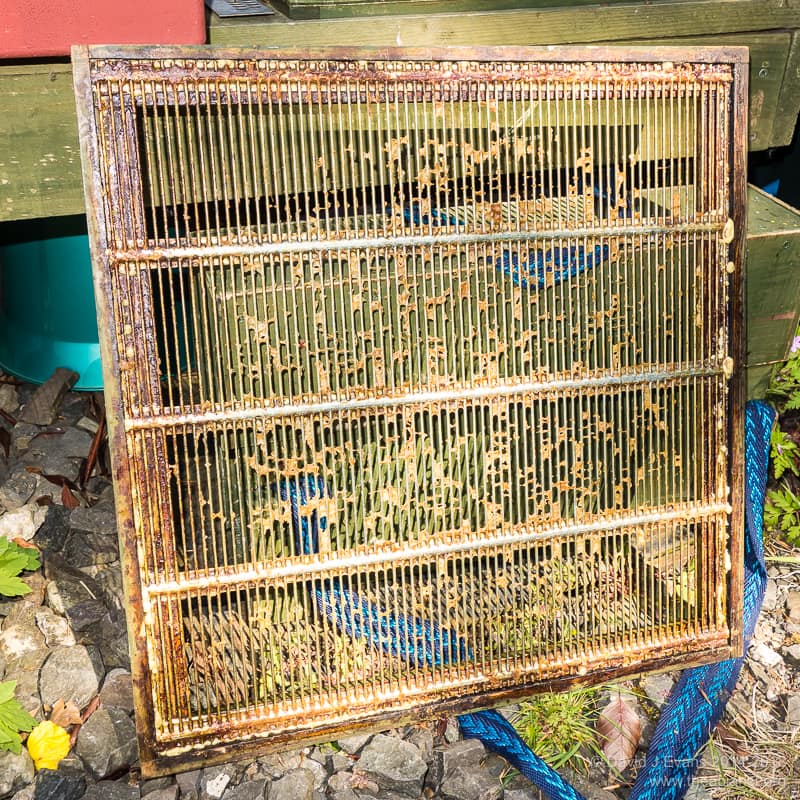 A perfectly logical question, and one to which you will hear 2 a variety of answers. These include the adverse effect on pollen collection, the possibility of an undersize virgin getting through anyway (with the loss of a swarm) and the distressing consequences it has for drones in the hive.

The late David Cushman covers these and other reasons.

Just because you probably shouldn’t, doesn’t mean you can’t … and this is what happens when you do.

I recently discussed my current thoughts on using a bee shed for teaching purposes. In it I made the point that it can get unbearably hot in a beesuit on a warm day. 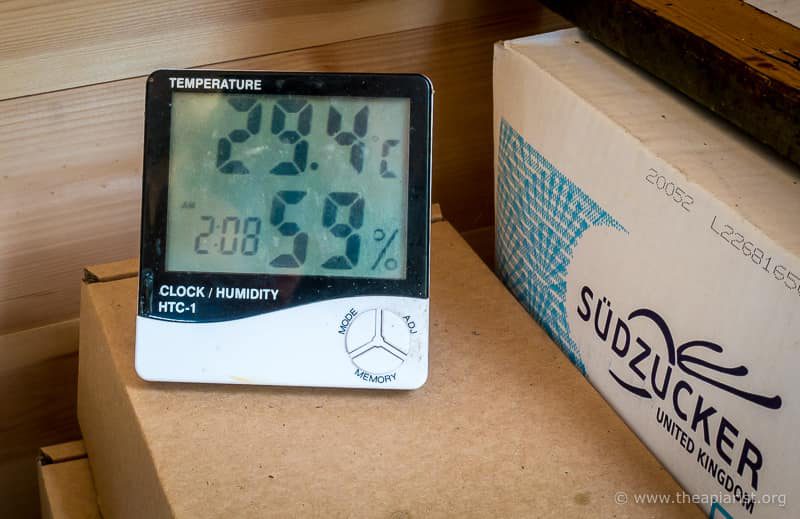 A couple of weeks ago I spent a sweltering hour or so inspecting the seven colonies in our larger shed.

It’s midsummer. It was a hot sunny day and the shed thermometer was reading over 32°C.

Some of the colonies were on double brood and had at least three supers on. Those that didn’t were recently installed and were a bit “temperamental”. These are research colonies and they came from a collaborator 3.

One colony should have recently requeened and I wanted to find, mark and clip her before the colony built up again.

I worked my way through the single boxes first. I found the queen in each of them except the one that had requeened.

My excuse was that I was half-blind with sweat. However, it’s not unusual to not find the queen when you actually need to 4.

I didn’t dally, I still had the 5-6 box towers to get through.

The tower of power

Finally I was left with colony #6. This had been strong from the start of the season and was now probably the strongest hive in the apiary. The double brood box was bulging with bees with at least 18 frames of brood in all stages.

The supers were very heavy.

At the beginning of the afternoon I’d intended to find the queen and prepare the box to be split once the flow was over (any day now). However, after more than an hour in stifling conditions I was struggling and starting to hallucinate about ice cold beer.

Inevitably I couldn’t find the queen 🙁

With sweat stinging my eyes and dripping off my nose onto the inside of the veil I could barely see the comb, let alone the queen. I did find eggs, so I knew she was present (or had been 2-3 days ago) and there were no obvious signs of swarm preparation. The colony was very busy, but the queen definitely still had space to lay.

I decided to pop a queen excluder between the brood boxes with the intention of returning 3-4 days later to look for eggs as an indicator of where the queen was.

I packed up, returned home and slaked my thirst.

Two days later my PhD student calls me from the apiary to tell me that colony #6 is swarming.

“Oh no they’re not … I checked them a couple of days ago and all was well”, I replied smugly.

But of course I visited the apiary to check anyway. 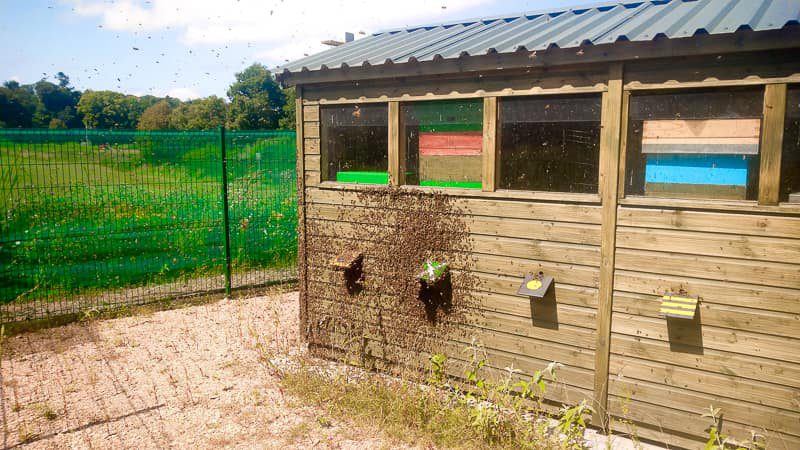 Oh yes they are!

Unlike a ‘typical’ swarm this appeared to have no centre or focus (where I’d usually expect to find the queen). The bees were spread over a wide area, hanging in a large clump under the landing board and on the edges and corners of the shed.

They weren’t clustering in any real sense of the word, but they also weren’t re-entering the hive.

I had a prod about around the entrance looking for the queen, gently removing handfuls of bees. The bees were very calm as you usually expect of swarms 5 and I could move them aside in my search.

Bees fanning at the hive entrance .. obviously a different hive as I had my hands full with the swarm.

However, there were a number of bees fanning busily at the hive entrance. Each was facing the entrance with the abdomen pointing up and away from the hive and the Nasanov gland exposed at the tip of the abdomen.

The Nasonov pheromone is a mix of terpenoids that attracts workers. It is left as an attractant by honey bees on nectar-rich flowers and – when produced by fanning bees at the hive entrance – it is usually a good indication that the queen is inside. An artificial version forms the commercial ‘swarm lure’ you can buy.

What’s (probably) in the box?

By now I could make a fair guess at what had happened.

I therefore expected to find both a queen and one or more queen cells in the box … and I needed to quickly make a decision about how to resolve the situation. 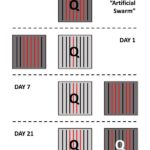 Swarm control usually refers to a hive manipulation that prevents the colony from swarming. For example, the classic Pagden artificial swarm.

Despite the fact that this colony had swarmed 7, if I could find the queen I could divide the colony like a Pagden artificial swarm and (hopefully) rescue the situation.

I removed the supers and put them to the side. I assembled a new floor and brood box with 10 mixed frames 8 and substituted this for the original floor and double brood box.

I took the double brood box outside 9, separated the two boxes and went through them carefully.

The upper box contained the queen … above the queen excluder. I put her on the frame she occupied back into the new empty brood box in the shed.

The lower box had a handful of queen cells along the edge of a partially drawn foundationless frame. I’d missed these in the previous inspection. I’ll blame it on the heat, but I may need to visit Specsavers …

I added a queen excluder to the new brood box and carefully placed the supers back on top. All the flying bees, which includes the foragers, would return to the original location within a day or two so the supers were there if the flow continued.

I inspected the colonies a few days later. The queenright colony in the original location in the shed was busy, the queen was laying the well 10 and there was still nectar coming in.

I carefully went though the queenless colony to see if there were any additional queen cells and knocked all back except one which I know was charged (i.e. contained a developing larvae).

With a bit of good weather there should be a new mated queen in the box by mid/late August. If there isn’t I’ll unite the colony back with the one containing the original queen.

As always there are lessons to be learned. The lessons this time are reasonably obvious:

Instead of a queen excluder, Thorne’s sell a “swarm trap” that consists of a box to fit over the hive entrance which has both a queen excluder and an exit for drones. They market it as being “developed with the hobby beekeeper in mind who finds weekly inspections to remove queen cells almost impossible“.

I’ve not seen one in use so cannot comment on it. However, in my opinion there’s “no gain without pain” … if you are going to keep bees you need to appreciate that the principles of the hobby involve the need for regular inspections. It would probably be better to just purchase local honey rather than relying on this type of swarm trap for missed inspections.

Some beekeepers place a queen excluder under a brood box after hiving a captured swarm onto undrawn foundation. This helps prevent the colony from absconding while the bees draw some comb. After that the queen will start laying and the risk of the swarm disappearing is much reduced.

I’ve never used a queen excluder like this as I don’t routinely collect swarms. Those I acquire generally arrive under their own steam in a bait hive. Since these already have one drawn comb a mated queen can start laying without delay.

I don’t ever remember having a swarm from a bait hive abscond. Casts (a swarm with an unmated queen) also seem to stay if they have chosen their destination and moved there voluntarily.

The alternative way to encourage a hived swarm to stay put is to give them a frame of open brood. I have done this but prefer not to 13 as I treat all swarms with a miticide soon after they are hived to reduce Varroa levels. To ensure this treatment is really effective I want to be certain there is no sealed brood in the hive.