A little over a year ago reports started to circulate of a study showing that Varroa feed on the fat body of bees rather than on haemolymph.

Having worked in Glasgow through the early noughties the title of this post was a no-brainer and an outline draft was written in December 2017. However, the peer-reviewed paper wasn’t published until last month, so it’s only now we’ve got the chance to judge the study and consider its implications.

Historically this was the accepted dogma. However, the experimental data supporting this conclusion – based upon labelling bees with radioactive isotopes and seeing what the mites acquired after feeding – was really not definitive. The experiments had been done in the 1970’s and the specificity of the labelling was a bit dubious. In addition, during the intervening period scientists had determined that, unlike vertebrate blood which is rich in cells and nutrients 1, haemolymph has little of either and is actually a pretty lousy food source.

In addition, and somewhat more circumstantially, Varroa control using chemotherapeutics fed to bees (and subsequently taken up by the mite during feeding) had been relatively disappointing.

Perhaps these chemicals weren’t getting to the right tissues of the bee?

Perhaps Varroa don’t feed on haemolymph after all?

This new study reports three independent experiments that, together, indicate that Varroa actually feed on the fat body of bees, rather than on haemolymph. The paper is so-called ‘open access’, so anyone can access it and therefore I’ll just provide a synopsis of the important bits.

The questions Samual Ramsey and colleagues attempted to answer were:

The authors counted phoretic mites on 104 bees. Over 95% of them were located on the underside of the body, predominantly on the left side of the bee, under the tergite or sternite3 on the third metasomal segment (i.e. the second visible segment of the abdomen).

This position is consistent with feeding on the fat body tissues which are most abundant under the inner ventral surface of the metasoma.

Bees were fed with Nile red, a lipophilic fluorescent stain that preferentially accumulates in the fat body. They co-fed bees with uranine, a differently coloured fluorophore that accumulates in the haemolymph. They then allowed mites to feed on the fluorescently labelled bees and subsequently photographed the mites under fluorescent light.

The rationale here was straightforward. If the mites fed on the fat body they would stain red due to taking up the Nile red stain.

It was notable that the red stain predominantly accumulated in the rectum and gut of the mite (image O above). The authors conducted all sorts of controls to confirm that the stains actually stained what they were supposed to – you can view these in the paper.

In the final part of the study the authors maintained mites in vitro (in an incubator), feeding them on a diet containing increasing amounts of fat body or haemolymph. These are tricky experiments and in some way the least satisfactory part of the study.

Two results suggest that fat body was beneficial or essential to the mites. Firstly, only mites that had 50% or more fat body in the diet survived for 7 days. Secondly, there was a dose response to the amount of fat body in the diet and fecundity. Mites on a 100% fat body diet exhibited 40% fecundity, the highest level observed in the study.

What can we conclude from the Ramsey study

The feeding position study is essentially correlative, but there could be other interpretations of the data. For example, that location on the bee might be the least accessible to a ‘grooming’ bee. Perhaps it’s a survival mechanism?

Survival and fecundity in in vitro studies wasn’t great. However, in defence of the authors, fecundity of mites under natural conditions can be as low as 40% and is not higher than 80%. Not all mites have baby mites. Thankfully.

Only 20% of the mites survived one week under in vitro conditions, even on a 100% fat body diet. In contrast, mites fed haemolymph alone died within 48 hours. This poor level of survival was surprising and suggests other essential components of the diet were probably missing.

Other published studies have shown reasonable survival of Varroa for at least 3 days, with at least one report of mites surviving on flowers for up to 7 days. I’m also aware that other laboratories can maintain mites in vitro for longer than 7 days without using any honey bee-derived components in the diet.

Hang on … what is the fat body anyway?

The fat body is multi-functional. It has been compared to the vertebrate liver and adipose tissue. It acts as a major organ for nutrient storage, energy metabolism and detoxification of things like pesticides.

Vitellogenin made by and stored in the fat body reduces oxidative stress and is associated with extending the longevity of overwintering bees. The fat body also has critical roles in metamorphosis.

So, not only multi-functional, but also very important.

Significance of the results … is this a game changer?

This paper has been discussed online as a ‘game changer’. That’s probably a bit strong. Whilst the fluorescent stain uptake study is reasonably convincing it must be remembered that it was conducted on adult bees.

Do mites on pupae also feast on the fat body?

This will have to be determined in the future. It’s a more difficult experiment of course.

The other two studies, and a number of additional small observations I’ve not discussed here, are certainly supportive, but not alone hugely convincing. The in vitro study in particular will be interesting to compare with (currently unpublished) studies from other laboratories that do not use honey bee fat bodies in their mite feeding and maintenance diet.

Does it matter what part of the bee the mite feeds on?

Clearly it does for the mite, but what about the beekeeper?

I think this study is significant for the beekeeper for two reasons – the first will only be relevant if and when lipophilic miticides are developed, the second matters right now.

The most important take home message

To prevent mites that feed on fat bodies from damaging vitellogenin production miticides have to be used early enough to protect the winter bees.

In the paper Ramsey makes the statement:

Simple reduction of mite loads late in the season to decrease the overwinter parasite load may not be enough, as it still allows for the mites to damage tissue critical to the process of overwintering …

A treatment schedule that includes treatment in late summer or early fall before mites can significantly damage fat body in developing winter bees would likely be more effective.

Which is precisely the point I’ve made previously about treating early enough to protect winter bees.

What the Ramsey paper adds is the piece of the jigsaw possibly explaining why late summer treatment is so important.

Chewin’ the Fat was a four-series Scottish comedy sketch show. It was broadcast from 1999 to 2002, with further Hogmanay specials until 2005. The show had a recurring cast of characters and sketches including The Big Man, The Banter Boys, The Lighthouse Keepers, Ballistic Bob and Taysiders in Space. 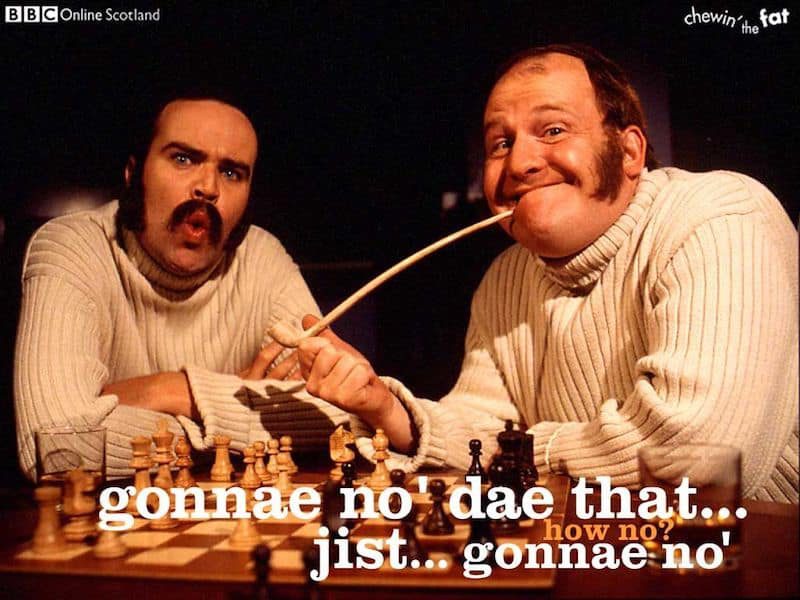 Gonna no’ dae that – The Lighthouse Keepers

Chewin’ the Fat was filmed in and around Glasgow (where I worked at the time) and the characters parodied a range of local ‘types’ … pretentious Kelvinsiders, Glaswegian gangsters, narcissistic golfers, The man from Kilmacolm, and shellsuit-wearing, chain-smoking, hard-drinking Glaswegian neds.

It was a bit rude and definitely an acquired taste. Without subtitles, some of the scenes would probably have been unintelligible south of the border.