I’ve previously commented that weak colonies that build up very slowly in Spring are more trouble than they’re worth. The resources they need – syrup, frames of emerging brood, more TLC – are rarely reflected in the subsequent honey yield.

Quite the contrary, they’re often a lost cause and it could be argued that, from a purely efficiency point of view, it would be better if the colony succumbed during the winter than staggered on into the Spring.

Better still, assuming they’re disease free, use the bees in the autumn by sacrificing the queen and uniting the colony with a strong colony. You’ll boost the latter and strong colonies both overwinter better and build up better the following year.

All the above makes perfect sense, but a combination of sentimentality and ill-placed optimism means that it’s not unusual – in late Spring – to find myself being reminded that “weak colonies that build up very slowly in Spring are more trouble than they’re worth”.

One of my colonies was undersized in late autumn and had built up very slowly this Spring. The queen was a little older than most in the apiary but she’d done well in the past and I thought she might have another season in her. Varroa drops in late autumn and mid-winter had been very low and the bees were beautifully tempered, calm, steady on the comb and a pleasure to work with.

But in the first inspection of the year (10th of May) there just weren’t enough of them. The queen was laying, pollen was coming in, there were no signs of disease and the colony behaviour remained exemplary.

Comparison between colonies is very informative. That’s why it’s easier to maintain two colonies than one. Other colonies in the same apiary were building up well. By late May I was starting swarm prevention measures on these, using pre-emptive vertical splits.

The small colony was largely forgotten or ignored. I peeked through the perspex crownboard a couple of times and could see they were building up.

I got distracted harvesting the early season honey from other colonies, running out of frames and with more swarm prevention and control. I finally completed a full inspection of the colony on the 17th of June, shortly before the summer solstice and the first official day of summer (so still technically Spring).

The colony had only a couple of frames of brood and covered a frame or two more than that. The temper and behaviour was still very good. The queen was present and laying. She was being attended by a retinue of workers and not being ignored or harassed.

But she was clearly losing her faculties. Many of the cells contained two or more eggs.

Multiple eggs in cells are often seen with laying workers and sometimes seen when a newly mated queen first starts laying. With laying workers the eggs are often placed on the sidewalls of cells and, as they’re unmated, they develop into drones. The brood pattern is scattered randomly around the frame. With newly mated queens the eggs are usually correctly placed in the base of the cell†.

The colony was clearly doomed. They showed no sign of trying to replace the queen, without which the future was bleak. I needed to rescue something from the situation. The choice depended on my interpretation of what had gone wrong. The options were:

A thorough inspection of the colony failed to find another queen or any evidence of a recently vacated queen cell. Frankly this didn’t take long, the colony was simply too small to ‘hide’ either of these. Option 3 could therefore be discounted. The presence of another queen would be really important if I was considering requeening the colony or uniting it with a queenright hive – both these are likely to go badly if there was a queen still present.

There was no drone brood at all in the colony and the laying pattern was clustered as would be expected from eggs laid by a queen. Option 2 could therefore almost certainly be discounted. Fortunately again as it’s difficult to requeen a colony containing laying workers. As another aside, I can’t remember seeing a colony with laying workers that also contained a (failed) queen.

That left the most likely explanation for the multiple eggs (and the undersized colony) was the simple failure of the queen. For whatever reason, she was laying at a much lower rate than usual and had started laying multiple eggs in cells. Of the three possibilities, this is the most straightforward. Occam’s razor (William of Ockham, ~1287-1347) is the problem-solving principle that states that the simplest explanation is probably the correct one.

The queen was removed from the colony and it was united over newspaper on top of a strong hive in the same apiary. Two days later the Varroa board underneath the colony was covered in shredded paper indicating that the colonies were united successfully. 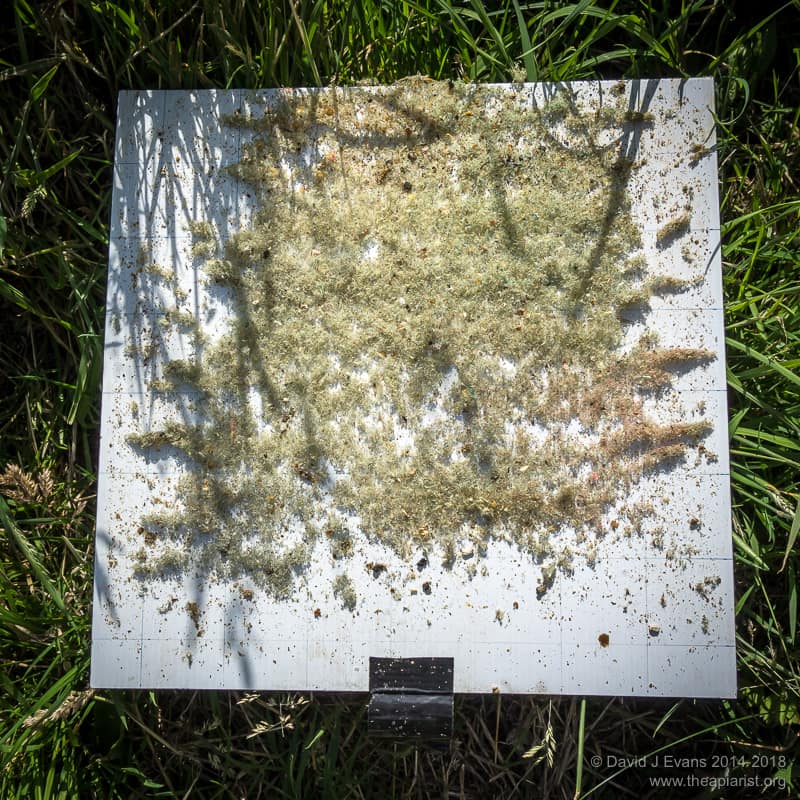 Which is what I should have done in mid-autumn last year.

A few days later I rearranged the colony, placing the two frames of brood into the bottom brood box and putting a clearer board underneath the top brood box. The resulting single colony, now a bit stronger, will be well-placed for the summer nectar flow and the nine frames of drawn comb vacated by the colony will be reused making up nucs for overwintering.

† Interestingly, I’ve never seen several larvae developing in cells after the multiple eggs hatch. Either the excess eggs or larvae must be removed by workers. I presume this means that the workers can’t count eggs, but may be able to count larvae – not literally of course, but by the amount of pheromones produced presumably. If they could count eggs they’d remove the excess and leave only one, making the identification of laying workers (or a recently mated misfiring queen) much more difficult. Something to be thankful for perhaps? They can, of course, identify the origin of eggs – this process is the basis of worker policing which was touched on in discussion of Apis mellifera capensis, and is of relevance to those using grafting for queen rearing.

The title of this post is a corruption of The Autumn of the Patriarch, a book by the Nobel laureate Gabriel García Márquez, written in 1975. The book is about the God-like power and status of a dictator, the General, and the awe in which he is held by the people. Of course, this isn’t the situation in matriarchal honey bee colonies, the structure of which is determined as much – if not more – by the workers, the brood and the circulating pheromones.