Finally, the winter appears to be receding and there’s pretty good evidence that the beekeeping season will shortly be starting. The early season pollen sources for the bees – snowdrops and crocus – are almost completely finished, but the willow is looking pretty good and the gorse is flowering well.

Actually, gorse flowers quite well year-round, but it’s only now warm enough for the bees to access it.

From an evolutionary point of view I’ve wondered why gorse ‘bothers’ to flower in mid-winter when there must be almost no pollinating insects about. Of course, as Dobzhansky said in the 1970’s “Nothing in Biology Makes Sense Except in the Light of Evolution” … gorse flowers all year because there must be a selective advantage for it to do so. 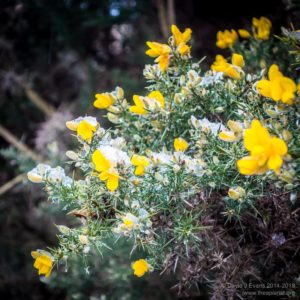 It turns out that it’s a little more complicated than me just being unable to observe winter-flying pollinating insects. Gorse probably flowers in midwinter for a couple of reasons.

Firstly, there are winter-flying pollinators, at least on warmer days. Secondly, the flowers are a cunning design 1 that allows self-pollination, even when tightly closed on a cold, midwinter day when covered in snow. This probably explains the clonal expansion and invasiveness of the plant. Finally 2 weevils of the Exapion genus eat the seeds … by flowering, and subsequently setting seed in midwinter, the gorse can avoid the attention of the weevils, which need warmer weather 3.

That was all a bit off-topic. However, it does explain the shocking pun used to head the previous section. Furze is another name for gorse, Ulex europaeus.

Now back to the bees … 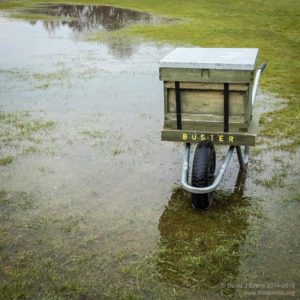 Inevitably we’ve had some April showers and the final bee moves over the last fortnight involved dodging the rain and wading through some minor flooding. Almost everything is now where it should be and – although perhaps a little later than usual – I can make some of the last-minute preparations for the season ahead.

The beekeeping season in Scotland – or at least my beekeeping season – involves long periods of near-total inactivity interrupted by May and June, which are usually totally manic. This ~9 week period covers the major swarming season and the best time of the year to rear queens. Both can happen at other – generally later – times of the year, but the weather becomes a major influence on their success. The last two seasons have been characterised by rubbish weather in July and August, resulting in poorly mated late season queens.

A consequence of the expected frenetic activity in May and June is that there’s no time to leisurely make up a few frames, or assemble a few supers. If they’re not ready now, they probably won’t ever be.

I’ve therefore already built a couple of hundred frames and just have to fit the foundation into some of them. Many of the frames I use are foundationless, but a proportion still have foundation. The latter are useful to intersperse with foundationless to encourage the bees to draw parallel comb.

Supers and frames with drawn comb are all safely stacked up from last season. Sometime over the next fortnight I’ll finish checking the last of these boxes over. Do they have a full set of frames? Are all the frames drawn? It’s irritating grabbing a box or two in the middle of a good nectar flow to find they only contain three frames, or it’s unwired thin foundation and unsuitable for the OSR.

The other thing I do is tidy up wavy or bulging sections of drawn comb. These are the frames that the bees have drawn out, maintaining bee space with the adjacent frame, but that leave gaping holes when put next to a different drawn comb 4. Life is too short to try and pair up the frames correctly 5. Instead I just use a sharp breadknife to make the comb reasonably parallel with the frame top bar. The bees tidy it up quickly and it certainly makes mixing and matching frames from different supers much easier.

The other frame-related task is to go through the stacked up boxes of brood frames saved from last year. These, and the drawn super frames, are some of the most valuable resources a beekeeper has. Assuming the frames are in good condition and there haven’t been too many rounds of brood reared in the frames they are invaluable when making up nucs during the season.

Some of these brood frames will have inevitably contained nectar or uncapped honey at the end of the previous season. Over the winter this tends to ferment and make a bit of a mess. The nectar drips out unless the frames are held vertically. It can look bubbly or frothy and it pongs a bit (usually, and unsurprisingly, of yeast). 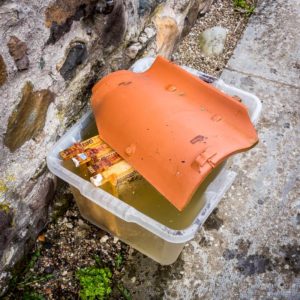 I don’t like using these without cleaning them up a bit first. The bees usually clean up small amounts of fermented honey, but often ignore frames packed with the stuff. I shake out the fermented honey and soak the frames in a tub of water for a few minutes. I then shake out the water and leave them to air dry before storing them for the season ahead.

This is the sort of job that needs to be done on a cool, dry day. If it’s warm you’ll likely be plagued with bees investigating the smell.

Brood frames just containing capped honey can be used ‘as is’. The bees don’t cap it until the water content is low enough to stop fermentation.

In contrast, the really old, black frames are either discarded outright or used for making up bait hives. There’s no point in trying to extract wax from them as there’s almost none left.

Finally, the bee bag gets a spring clean. I empty everything out and chuck away all the rubbish that seems to accumulate during the season … the squeezed-together bits of brace comb, the torn nitrile gloves, the sheets of newspaper for uniting etc. Everything goes back together in labelled ice-cream cartons (‘daily’, ‘queen rearing’), having checked they contain the essentials – sharp scissors, Posca marking pens and a queen marking cage, additional cages for queen introduction, grafting glasses and a sable paintbrush etc.

I re-stock the honey bucket full of smoker fuel. This contains a mix of wood chip animal bedding, the lids of egg boxes not used to make firelighters and some lovely dried rotten wood. The smoker also gets its annual de-coke. Over the season you can get quite a build up of tarry, sooty deposits in the smoker, particularly on the inside of the lid. Using a blowtorch and a little encouragement from the pointed end of a hive tool it’s easy enough to clean all these out. As a result, the smoker will stay lit longer and generally work better. 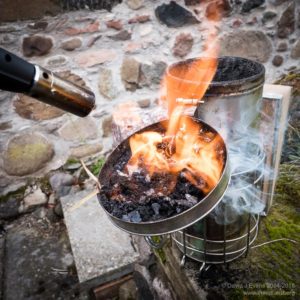 This post was supposed to have been last week. However, a delayed flight meant I was stranded on the tarmac in ‘airplane’ mode when I should have been changing the scheduled posting date. D’oh! Instead “Let there be light“, which I’d written a couple of weeks ago and was already scheduled as a backup, snuck out. By the time it appears – the 20th of April – I expect to have conducted the first full set of inspections and I’ll be playing catch-up with the next couple of posts as the season kicks off.

Stop press … with great weather over the latter part of the week I’ve got round my apiaries and inspected all colonies. With the exception of the two known duds, all are queenright and building up to varying extents … from OK to very well. The strongest will need supering this weekend. Considering how long and cold the winter has been – average temperatures November to March have been 3-4°C – this was encouraging and 3 weeks earlier than I got into some colonies in 2017.

It was great to be beekeeping again 🙂