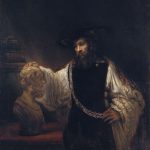 Aristotle not in his beesuit

Almost every article or review on chronic bee paralysis virus 1 starts with a reference to Aristotle describing the small, black, hairless ‘thieves‘, which he observed in the hives of beekeepers on Lesbos over 2300 years ago 2.

Although Aristotle was a great observer of nature, he didn’t get everything right.

And when it came to bees, he got quite a bit wrong.

He appreciated the concept of a ‘ruling’ bee in the hive, but thought that the queen was actually a king 3. He also recognised different castes, though he thought that drones (which he said “is the largest of them all, has no sting and is stupid”) were a different species.

He also reported that bees stored noises in earthenware jars (!) and carried stones on windy days to avoid getting blown away 4.

However, over subsequent millenia, a disease involving black, hairless honey bees has been recognised by beekeepers around the world, so in this instance Aristotle was probably correct.

The names given to the symptomatic bees or the disease include little blacks or black robbers in the UK, mal nero in Italy, maladie noire in France or schwarzsucht (black addiction) in Germany. Sensibly, the Americans termed the disease hairless black syndrome. All describe the characteristic appearance of individual diseased bees.

Evidence that the disease had a viral aetiology came from Burnside in the 1940’s who demonstrated the symptoms could be recapitulated in caged bees by injection, feeding or spraying them with bacterial-free extracts of paralysed bees. Twenty years later, Leslie Bailey isolated and characterised the first two viruses from honey bees. One of these, chronic bee paralysis virus (CBPV), caused the characteristic symptoms described first by Aristotle 5.

CBPV infection is reported to present with two different types of symptoms, or syndromes. The first is the hairless, black, often shiny or greasy-looking bees described above 6. The second is more typically abnormal shivering or trembling of the wings, often associated with abdominal bloating 7. These bees are often found on the top bars of the frames during an inspection. Both symptoms can occur in the same hive 8.

CBP onset appears rapid and the first thing many beekeepers know about it is a large pile (literally handfuls) of dead bees beneath the hive entrance.

Despite thousands of bees often succumbing to disease, the colony often survives though it may not build up enough again to overwinter successfully.

BeeBase has photographs and videos of the typical symptoms of CBPV infection.

Until recently, CBP was a disease most beekeepers rarely actually encountered.

I’ve got a few hundred hive year’s worth 9 of beekeeping experience but have only twice seen CBP in a normally-managed colony. One was mine, another was in my association apiary a few years later.

A beekeeper managing 2 to 3 colonies might well never see the disease.

A bee farmer running 2 to 3 hundred (or thousand) colonies is much more likely to have seen the disease.

As will become clear, it is increasingly likely for bee farmers to see CBP in their colonies.

Ebola is a re-emerging disease. It was first discovered in humans in 1976 and caused a few dozen sporadic outbreaks 10 until the 2013-16 epidemic in West Africa which killed over 11,000 people.

Sporadic and rare … but increasing?

Notwithstanding the apparently sporadic and relatively rare incidence of CBP in the UK (and elsewhere; the virus has a global distribution) anecdotal evidence suggested that cases of disease were increasing.

Something can be rare but definitely increasing if you’re certain about the numbers you are dealing with. If you only have anecdotal evidence to go on you cannot be certain about anything very much.

If the numbers are small but not increasing there are probably other things more important to worry about.

However, if the numbers are small but definitely increasing you might have time to develop strategies to prevent further spread.

Far better you identify and define an increasing threat before it increases too much.

With research grant support from the UKRI/BBSRC (the Biotechnology and Biological Sciences Research Council) to the Universities of Newcastle (Principle Investigator, Prof. Giles Budge) and St Andrews, and additional backing from the BFA (Bee Farmers’ Association), we set out to determine whether CBPV really was increasing and, if so, what the increase correlated with (if anything).

The paper is Open Access and can be downloaded by anyone without charge.

There are additional components of the study involving the biology of CBPV, changes in virus virulence, other factors (e.g.environmental) that contribute to disease and ways to mitigate and potentially treat disease. These are all ongoing and will be published when complete.

We ‘mined’ the National Bee Units’ BeeBase database for references to CBPV, or the symptoms associated with CBP disease. The data in BeeBase reflects the thousands of apiary visits, either by call-out or at random, by dedicated (and usually overworked) bee inspectors. In total we reviewed almost 80,000 apiary visits in the period from 2006 to 2017.

There were no cases of CBPV in 2006. In the 11 years from 2007 to 2017 the CBP cases (recorded symptomatically) in BeeBase increased exponentially, with almost twice as much disease reported in commercial apiaries. The majority of this increase in commercial apiaries occured in the last 3 years of data surveyed.

Apiaries recorded with chronic bee paralysis between 2006 and 2017.

BeeBase covers England and Wales only. By 2017 CBPV was being reported in 80% of English and Welsh counties.

During the same period several other countries (the USA, several in Europe and China) have also reported increases in CBPV incidence. This looks like a global trend of increased disease.

But is this disease caused by CBPV?

It should be emphasised that BeeBase records symptoms of disease – black, hairless bees; shaking/shivering bees, piles of bees at the hive entrance etc.

How can we be sure that the reports filed by the many different bee inspectors 11 are actually caused by chronic bee paralysis virus?

Or indeed, any virus?

To do this we asked bee inspectors to collect samples of bees with CBPV-like symptoms during their 2017 apiary visits. We then screened these samples with an exquisitely sensitive and specific qPCR (quantitative polymerase chain reaction) assay.

Almost 90% of colonies that were symptomatically positive for CBP were also found to have very high levels of CBPV present. We are therefore confident that the records of symptoms in the historic BeeBase database really do reflect an exponential increase of chronic bee paralysis disease in England and Wales since 2007.

Interestingly, about 25% of the asymptomatic colonies also tested positive for CBPV. The assay used was very sensitive and specific and allowed the quantity of CBPV to be determined. The amount of virus present in symptomatic bees was 235,000 times higher than those without symptoms.

Further work will be needed to determine whether CBPV is routinely present in similar proportions of ‘healthy’ bees, and whether these go on and develop or transmit disease.

Using the geospatial and temporal (where and when) data associated with the BeeBase records we investigated whether CBPV symptomatic apiaries were clustered.

For example, in any year were cases more likely to be near other cases?

Across all years of data analysed together, or for individual years, there was good evidence for spatial clustering of cases.

We also looked at whether cases in one year clustered in the same geographic region in subsequent years. 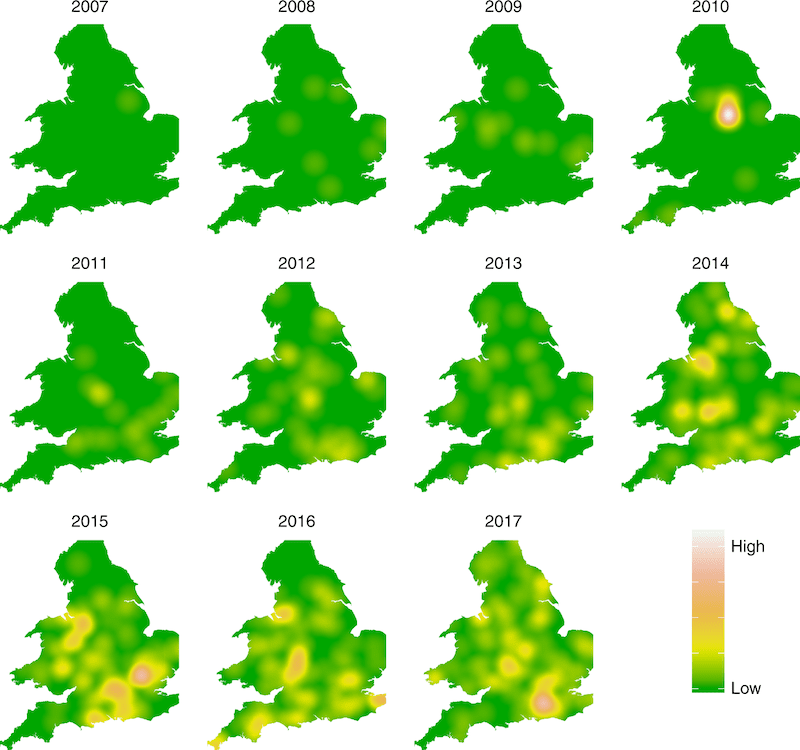 This was particularly interesting. It appears as though there were increasing numbers of individual clustered outbreaks each year, but that the clusters were not necessarily in the same geographic region as those in previous or subsequent years.

The disease appears somewhere, increases locally and then disappears again.

A relatively rare disease that is spatially but not temporally clustered is a tricky problem for which to define risk factors. Steve Rushton, the senior author on the paper, did a sterling job of analysing the data that was available.

The two strongest apiary-level factors that contributed to disease risk were:

Bee farming is often very different from amateur beekeeping. The colony management strategies are altered for the scale of the operation and for the particular nectar sources being exploited. For example, colonies may already be booming to exploit the early season OSR. This may provide ideal conditions for CBPV transmission which is associated with very strong hives and/or confinement.

There are good records of honey bees imported through official channels. This includes queens, packages and nucleus colonies. Between 2007 and 2017 there were over 130,000 imports, 90% of which were queens.

An increased risk of CBP disease in apiaries with imported bees does not mean that the imported bees were the source of the disease.

With the data available it is not possible to distinguish between the following two hypotheses:

There are ways to tease these two possibilities apart … which is obviously something we are keen to complete.

… but not necessarily accurate publicity 🙁

We prepared a press release to coincide with the publication of the paper. Typically this is used verbatim by some reporters whereas others ask for an interview and then include additional quotes.

Some more accurately than others 🙁

The Times, perhaps reflecting the current zeitgeist, seemed to suggest a directionality to the disease that we certainly cannot be sure of: 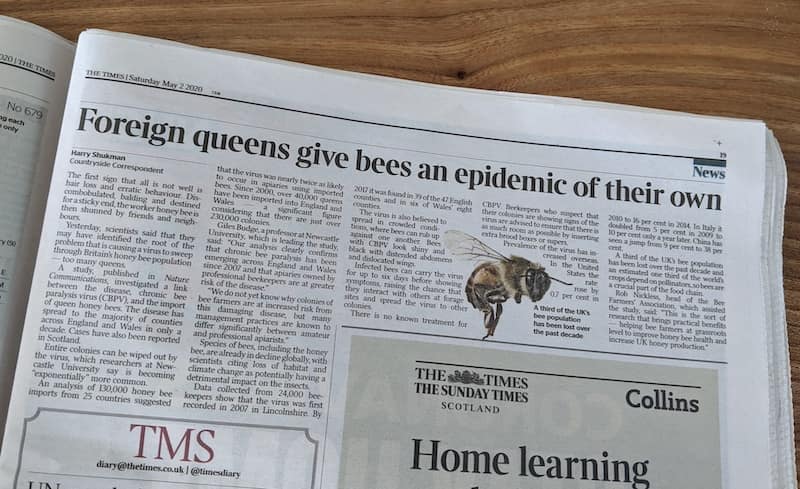 Its sister publication, The Sun, “bigged it up” to indicate – again – that bees are being wiped out. 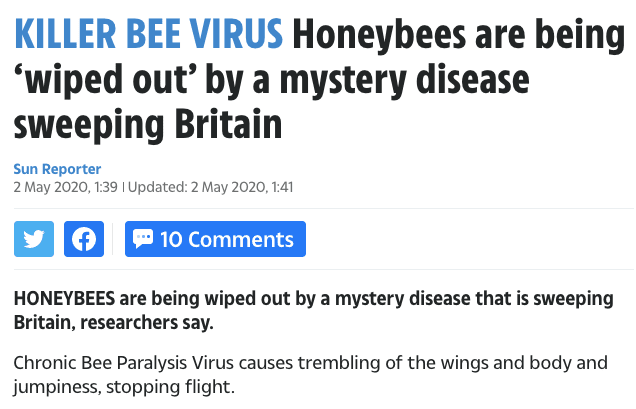 And the comments included these references to the current Covid-19 pandemic:

All of which I found deeply worrying, on a number of levels.

The Telegraph also used the ‘wiped out’ reference (not a quote, though it looks like one). They combined it with a picture of – why am I not surprised? – a bumble bee. D’oh! 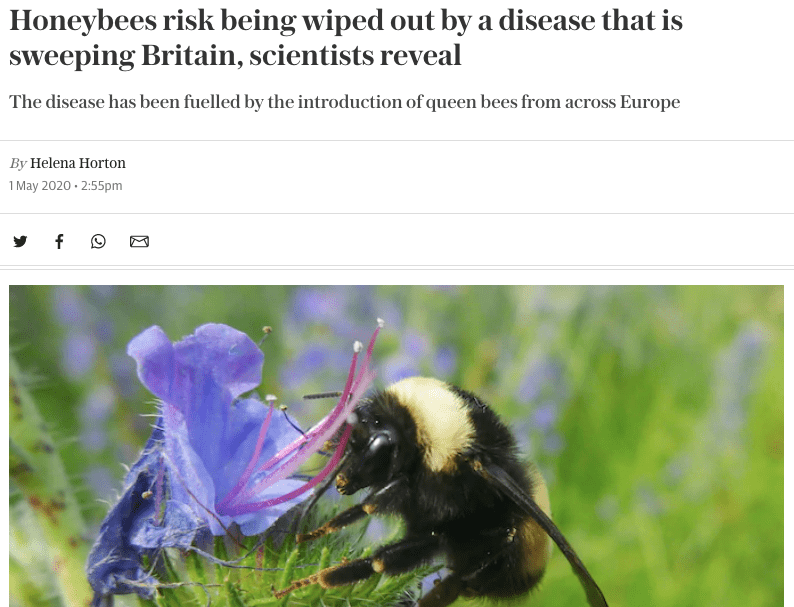 The Daily Mail (online) had a well-illustrated and pretty extensive article but still slipped in “The lethal condition, which is likely spread from imports of queen bees from overseas …”. The unmoderated comments – 150 and counting – repeatedly refer to the dangers of 5G and EMFs (electric and magnetic fields).

I wonder how many of the comments were posted from a mobile phone on a cellular data or WiFi network?

CBPV is causing increasing incidence of CBP disease in honey bees, both in the UK and abroad. In the UK the risk factors associated with CBP disease are commercial bee farming and bee imports. We do not know whether similar risk factors apply outside the UK.

Knowing that CBP disease is increasing significantly is important. It means that resources – essentially time and money – can be dedicated knowing it is a real issue. It’s felt real to some bee farmers for several years, but we now have a much better idea of the scale of the problem.

We also know that commercial bee farming and bee imports are both somehow involved. How they are involved is the subject of ongoing research.

Practical solutions to mitigate the development of CBP disease can be developed once we understand the disease better.

I am an author on the paper discussed here and am the Principle Investigator on one of the two research grants that funds the study. Discussion is restricted to the published study, without too much speculation on broader aspects of the work. I am not going to discuss unpublished or ongoing aspects of the work (including in any answers to comments or questions that are posted). To do so will compromise our ability to publish future studies and, consequently, jeopardise the prospects of the early career researchers in the Universities of St Andrews and Newcastle who are doing all the hard work.

This work was funded jointly by BBSRC grants BB/R00482X/1 (Newcastle University) and BB/R00305X/1 (University of St Andrews) in partnership with The Bee Farmers’ Association and the National Bee Unit of the Animal and Plant Health Agency.