If you managed to spot the queen in the image a fortnight ago you did better than I did … although she was clipped and marked, there was no sign of her in the bees clustered around the hive entrance. Furthermore, once they’d returned to the colony she was clearly absent (an oxymoron surely?) at the next inspection – no eggs, several well developed queen cells and the usually placid bees were rather intemperate. Perhaps she was lost in the grass, got injured or was otherwise incapacitated during swarming? Perhaps she did return and was then done away with? A pity, as they were good stock, and had already produced three full supers this season. However, I’d also grafted from this colony – see below.

Here’s another picture of a queen that’s a bit clearer … but wasn’t when inspecting the colony.

I performed a colony split using a Snelgrove board. The colony was clearly thinking about swarming, with a couple of 1-2 day old unsealed queen cells present during the inspection. I knocked these back and introduced a frame of eggs from better stock. On checking the nominally queenless half on the seventh day they behaved as though they were queenright (no new QC’s on the frame of eggs provided or elsewhere, calmer than expected etc.). I must have missed a sealed cell (presumably a tiny one) when splitting the colony the week before. After a bit of searching – it was a crowded box – I found a small knot of bees harrying a tiny queen, by far the smallest I’ve seen this year and not really any bigger than a worker. I separated the majority of the workers and managed to take a couple of photos.

The abdomen is not well shown in the picture but extends to just past the protruding antenna of the worker behind her. Overall she was narrower and only fractionally longer than the workers in the same colony. When surrounded by a golf ball-sized clump of workers she was effectively invisible. 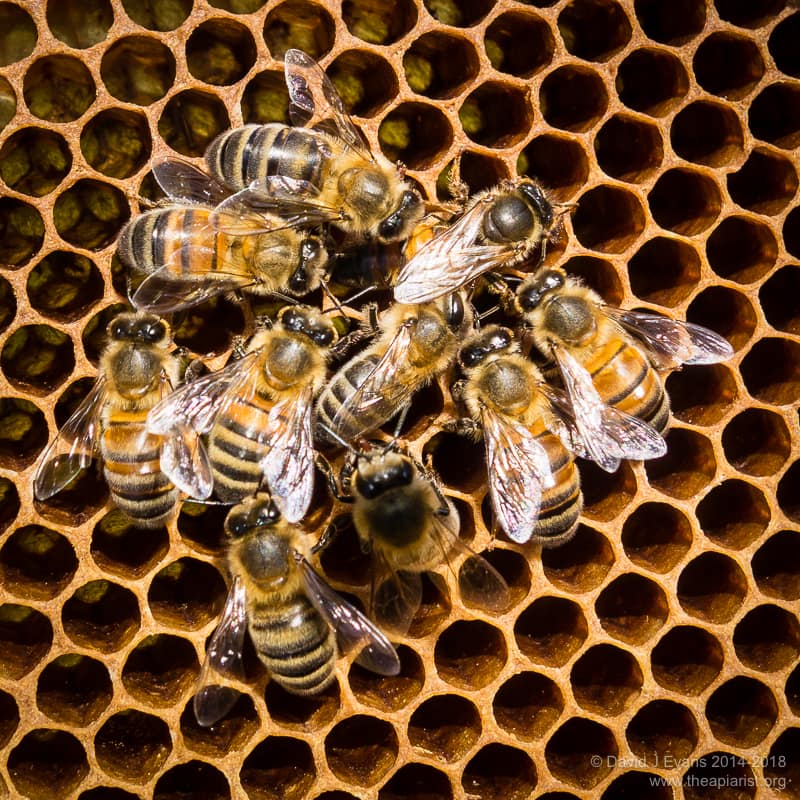 The picture above was taken near the end of May, shortly before I removed the first batch of cells from a cell raising colony set up with a Cloake board. These queen cells were from grafts raised from the colony that subsequently swarmed from the bee shed. The cells went into 3+ frame poly nucs arranged in a circle split, the queens emerged during glorious weather in the second week of June, matured for a few days and – just about the time they would be expected to mate – got trapped in the colonies by ten days of very poor weather.

However, over the last few days the weather has picked up, I’ve seen queens leaving on orientation or mating flights and the workers have started piling in pollen. All of these are good signs and suggest that at least some of the queens are already mated and laying … we’ll see at the next inspection.