I conducted my first inspections of colonies outside the bee shed last week. One colony that had looked good going into the winter had about 5-6 ‘seams’ of bees when I lifted the crown board … but some of the first bees to take off were big fat drones. Even without seeing them you can hear their distinctive buzz as they fly off clumsily. Something was wrong. It’s still too early for significant numbers of drones to be about in what is turning out to be a late Spring.

Sure enough, the first few frames contained ample stores and the frames in the middle of what should be the brood nest had been cleared, cleaned and prepared for the queen to lay in. However, the only brood was a rather pathetic patch of drone cells. Clearly the queen had failed early this season and had become a drone laying queen (DLQ). The brood was in a distinct patch indicating it was a DLQ rather than laying workers which scatter brood all over the frames. There were no young larvae, a few late stage larvae, some sealed brood and a few dozen adult drones. The absence of eggs and young larvae suggested that the queen might have either recently given up or been disposed of. There was even a rather pathetic queen cell, no doubt also containing a drone pupa. 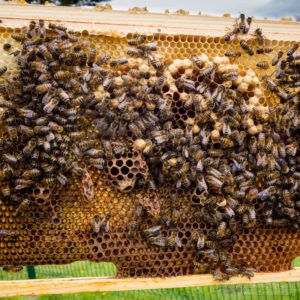 I think this colony superseded late last season so the queen would have been unmarked. It also might explain why she was poorly mated. However, a quick but thorough search through the box failed to locate her. I was short of equipment, newspaper and time so shook all the bees off the frames and removed the hive … the hope being that the bees would reorientate to the other hives in the apiary.

I tidied things up, made sure the smoker was out and packed away safely and quickly checked the location where the colony had been sited … there was a pretty good sized cluster of bees accumulated on the stand. It was getting cooler and it was clear that the bees were not going to “reorientate to the other hives in the apiary” as I’d hoped. More likely they were going to perish overnight as the temperature was predicted to drop to 3°C.

I never think it’s worth mollycoddling weak or failing (failed?) colonies in the Spring as they’re unlikely to do well enough to get a good crop of honey. However, I also try and avoid simply letting bees perish because of lack of time or preparation on my part. I therefore put a small number of frames – including one of stores – into a poly nuc and placed it on the stand in place of the old hive. Within minutes the bees were streaming in, in much the same way as a swarm shaken out on a sheet enters a hive. I left them to it and rushed back to collect some newspaper. By the time I returned they were all in the poly nuc.

Since I still wasn’t certain where the DLQ was, or even if she was still present, I placed a couple of sheets of newspaper across the top of the brood box on a strong colony, held in place with a queen excluder. I made a couple of small tears through the newspaper with the hive tool and then placed the DLQ colony on top. 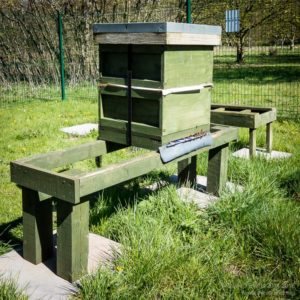 The following day there was lots of activity at the hive entrance and a peek through the perspex crownboard showed that the bees had chewed through a big patch of the newspaper and were now mingling freely. I’ll check again in a few days (it’s getting cold again) and will then remove the top box and shake the remaining bees out – if there’s a queen present (which is pretty unlikely now) she won’t know how to return to the new site.

Lessons learned† … firstly, be prepared during early-season inspections for failed queens and have the necessary equipment to hand – newspaper for uniting, a queen excluder etc. Secondly, there’s no need to rush. These bees had been headed by a DLQ for a significant period – going by the numbers of adult drones and small remaining amount of sealed and unsealed drone brood – another day or two wouldn’t make any difference. Rather than shaking them out as the afternoon cooled I’d have been better returning another afternoon with the necessary kit to make the best of a bad situation.

I checked another apiary later in the week and discovered another couple of hives with DLQ’s 🙁  In both cases the queen was either unmarked and invisible, or AWOL. If the former they’d have again been supercedure queens as they should have been marked white and clipped from a batch raised and mated in late May/early June last season using a circle split. However, this time I was prepared and united the boxes in the same way over newspaper held down with a queen excluder. All the other colonies I checked were strong. However, these three DLQ colonies – all nominally headed by queens raised last year – are the most I’ve ever had in a single winter and confirm what a poor year 2015 was for queen mating. 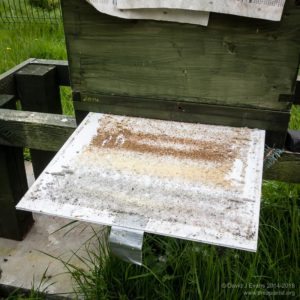 These three failed colonies – in addition to the presence of variable amounts of drones or drone brood – were also notable for the large amounts of stores still present in the hive. Although it’s been unseasonably cold this April (with regular overnight frosts and strong northerly winds keeping the temperatures – and the beekeepers – depressed) healthy colonies are still building up well, using remaining stores when they can’t get out to forage. As a consequence there’s a real risk of colonies starving. In contrast, colonies with failed queens will be raising little or no brood, so the stores remain unused.

Assuming the colony is disease-free these frames can be put aside somewhere safe (and bee proof) for use during preparation of nucs later in the season.