The ‘Ben Harden’ queenright queen rearing method uses a double brood box in which much of the space in the top box (above the queen excluder) is filled with oversize dummy frames. These have the effect of forcing bees in the top box to be concentrated on the frames containing young larvae and, critically, the grafted larvae in the cell bar frame. 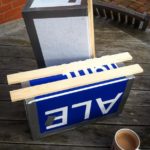 Normally the frame containing the grafts is accompanied by a frame of unsealed brood and two frames containing ample levels of pollen. The fat dummies that flank these occupy the remainder of the box and therefore each need to be the thickness of three and a half frames (i.e. 133 mm). They can be built from pretty much anything convenient – thin plywood around a softwood frame or Correx held together with duct tape work equally well.

To make them slightly more useful they can be filled with expanded polystyrene chips. They can then be used to ‘dummy down’ a weak colony in a standard brood box for the winter, effectively converting it to a four-frame nuc (assuming two are used) without having too much dead space for the bees to keep warm. If there is no flow grafted larvae will usually be ignored. To avoid this it is necessary to simulate a flow by feeding with thin syrup. It is therefore useful to build at least one fat dummy with an integrated frame feeder. Dave Cushman describes construction of fat dummies with a very narrow feeder, negating a requirement for a wooden float. Mine are wider, about 20mm, because that was the size wood I had at the time … I’ve not had problems with them being a bee graveyard. 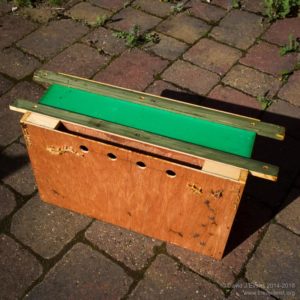