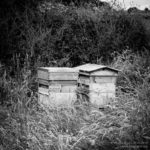 Although it’s said that the majority of beekeeping problems can be resolved using a nuc colony (actually I’m not sure where this comes from, Hooper? Waring? Clamp?) I think the addition of a second full colony actually makes beekeeping easier. The only significant drawback is the additional equipment needed … at the bare minimum an additional floor, brood box, queen excluder, supers (realistically three), crownboard and roof. Remember that these will all be in use and that you’ll need further spares for the swarm control method you employ. This could be as little as one additional brood box for the Demaree method. Don’t skimp on these spares … you might need them for both hives at the same time.

The two major advantages of a second colony are that they are unlikely to, a) build up or behave identically, or b) to develop problems simultaneously. Of these, the former can provide reassurance to the inexperienced beekeeper whereas the latter can rescue what would otherwise be a disastrous situation. 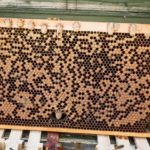 A lot of beekeeping involves judging how a colony is performing … are they building up well enough, do they have enough space, is the queen laying well, is the colony well behaved, do they have sufficient stores? These are almost all easier to determine if you have a second colony on the same site to make the comparisons against. For example, a poorly behaved or aggressive colony makes for miserable beekeeping. Is this because of poor genetics (in which case you really should requeen the colony)? Alternatively, is it because of recent stormy weather or the nectar flow stopping? If the latter, it’s likely that all the colonies in an apiary will be equally effected. Comparing two colonies subject to the same environmental conditions makes this much easier. 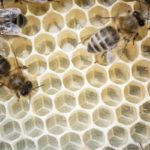 Some of the most common problems encountered by new beekeepers involve dealing with queenless or weak colonies … these are situations in which a second colony can save you from disaster. How many new beekeepers panic when they find queen cells during an inspection? It’s not uncommon and I did in my first year. The natural response is to destroy all the queen cells before confirming whether the colony has already swarmed. If this happened more than four or five days previously there will be no young larvae to raise a new queen from. Without intervention the colony is doomed. However, a frame of eggs transferred from a second colony will rescue the colony (or, if ignored, will confirm that there is likely a virgin queen already present and that a little patience is required to allow her to get out and mate). In you’re in an active beekeeping association you will probably be able to scrounge a frame of eggs from another association member, but it’s a whole lot easier taking one from your second colony. 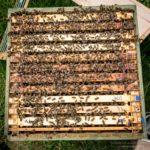 Weak colonies overwinter poorly. Not only are they less likely to survive, they also generally build up slowly the following Spring. This means you might miss the oil seed rape harvest or, more seriously, that the colony is less able to cope with a sudden cold-snap resulting in chilled brood, chalkbrood problems and a decline in colony health. Strong colonies generally overwinter well, are less susceptible to disease and collect significantly more honey. With one weak colony in late summer you have few options other than nursing it through the winter. With two colonies, only one of which is weak, you have the option of uniting them to make a single strong colony.

Finally, if the season progresses without a hitch, not only will your two colonies yield more honey but (with careful timing) you’ll be able to steal a frame or so of brood and stores from each to generate a nucleus colony to overwinter … either as a backup, to make increase or for sale the following Spring.

* this assumes the new beekeeper ended the first year by successfully overwintering a single colony.