We’re in the hiatus between the end of the beekeeping season and the start of the beginning of the planning for the preparation for the next. Or, I am.

Of course, if you’re reading this from Australia (G’day … the 5th largest readership globally) or Chile (Hola … 62nd in the list) then things are probably just getting really busy.

Inevitably things here are going to be a bit quiet for a few months. Have patience.

Getting ready for winter

Here in the Northern hemisphere, at a latitude of about 56°N, the nights are rapidly getting longer and the temperature is tumbling. We’ve had several sharp frosts already. I checked my bees yesterday through the perspex crownboards – where present – and most were pretty tightly huddled together. In the very warmest part of the day there were a few flying in the weak sunshine, but the majority of colonies were quiet.

Since many of the most recent posts have been rather long (and I’m pressed for time with work commitments) I’m going to restrict myself to a few brief comments about this tidy – and tiny – little hive tool from Thorne’s. 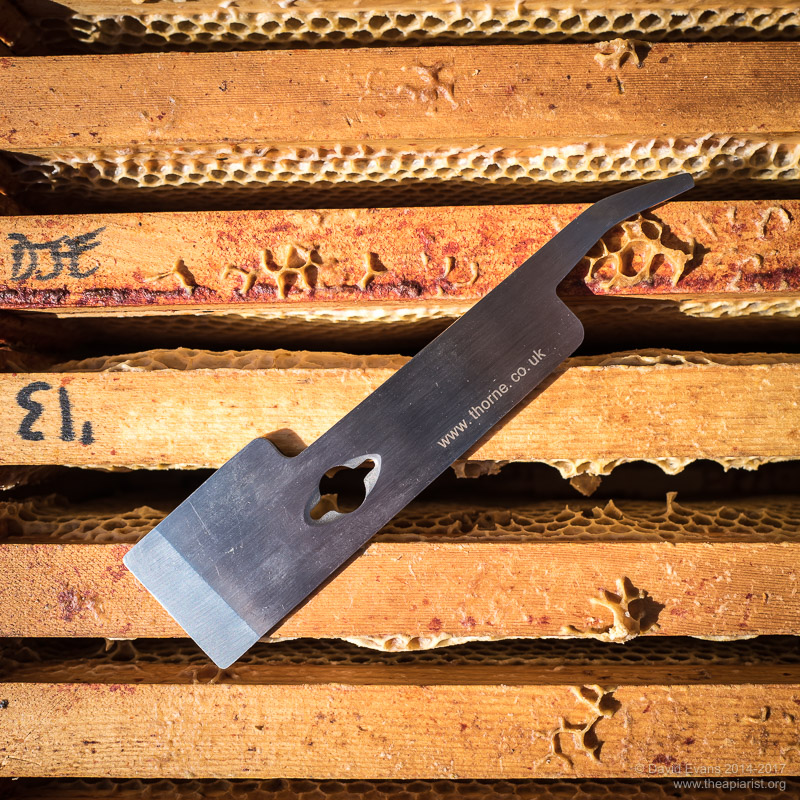 One of the final tasks of the year is to slice off the brace comb built in places along the tops of the frames while feeding colonies. I only use fondant, usually adding 12.5 kg to start with and then a further few kilograms if I think the hive is a bit light. All this fits nicely under one of my inverted, insulated perspex crownboards. However, as the fondant it taken down and stored, the bees tend to build little pinnacles of comb under or around the plastic bag.

Before closing the colony up for the season all these bits of brace comb need to be tidied away. I simply run a sharp hive tool along the top bars of the frames, remove the wax and – eventually – melt it down in my steam wax extractor. If you leave the wax in place you can’t put the crownboard back the right way up … or, when you do, you risk crushing bees.

Bargains in the sales

In the Thorne’s summer sales this year I bought the usual range of stuff I have almost no use for, together with half a dozen of the cheapo copies of their claw hive tool to replace those I’ve lost or lent during the year.

In addition I bought a couple of their ‘pocket hive tools’ (shown above) for a quid each.

These are small and neat, have a simple frame lifter at one end and a very good, sharp, chisel tip at the other. They are made of stainless steel. They fit neatly into the palm of the hand, don’t project too far and yet are enough to provide the leverage to separate all but the most stubbornly propolised frames.

For tidying up the top bars of my hives before closing them up for year this little hive tool was just the job.

‘Pocket hive tool’ is a bit of a misnomer though. It’s certainly small enough to fit into your beesuit pocket, but just about sharp enough it won’t be staying there long. Any serious pressure, for example as you get back into the car/van/truck risks either a nasty injury ( 😯 ) or it will eventually escape through a neatly sliced-through seam.

It might be better to keep it in your bee bag, or – as I do with other hive tools – store it in a bucket of soda in the apiary.

The phrase small, but perfectly formed is at least 200 years old. Google Books first lists it in the Gentleman’s Magazine and Historical Chronicle of 1779 (though in those days they used a medial or long ‘s’ so the title was the Gentleman’s Magazine and Hiſtorical Chronicle) where it appears in an article by Mr Rack describing (or deſcribing) a new found aquatic animal. Whether ‘small, but perfectly formed‘ is now an idiom or a cliche is unclear. The usually excellent Brewers Dictionary of Phrase and Fable (2014) defines the idiom as meaning “something noticeably small but compensating for this by a perfection of quality”. Their first reference to the phrase occurs in a letter written in October 1914 by Duff Cooper to Lady Diana Manners, later his wife, and quoted in Artemis Cooper’s Durable Fire (1983): ‘Your two stout lovers frowning at one another across the hearth rug, while your small, but perfectly formed one kept the party in a roar’. The expression was probably not original to Cooper but drawn from the fashionable talk of the period. The usage is often tongue-in-cheek or journalistically formulaic for anything small … which is exactly how I’ve used the term in the title of this post.