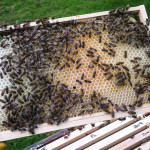 It’s 3-4 weeks until the first full hive inspections (around about when the ornamental Ribes starts flowering) … after that it’s startling how fast the season takes off. I’m never as well prepared as I should be and often run out of frames and have to build them on the day they’re needed. This doesn’t make for relaxing beekeeping and is something I hope to avoid this season.

The recommendation from the National Bee Unit is to replace at least one third of brood comb a year (PDF). Unless brood comb is nearly unused – for example, frames that have only had stores and/or pollen in – I  usually try and replace it more frequently than this. This helps prevent the build-up of pathogens such as Nosema. In addition to fresh floors, many of my colonies will therefore also be getting either a Bailey comb change or will be ‘treated’ to a shook swarm early in the season. This ensures they are on new, fresh, disease-free comb and gives them the best possible start to the year. This means another 11 frames are required for every overwintered colony. Furthermore, because I’m concentrating on making nucs this season I’m going to need even more frames than usual.

Remember to keep a few empty old dark brood frames for your bait hives. Keep the wax moths away by freezing them, using DiPel or wrapping them up securely.

Old frames can be reused if sterilised. I use a homemade steam wax extractor to clean them up and then scrape away any remaining old propolis. After 15-30 minutes in boiling steam they should be sterilised. The frames look a bit tatty but are perfectly serviceable. Foundationless frames need re-‘wiring’ (actually fishing monofilament) as it tends to lose tension in the heat.

I’m gradually switching over to predominantly foundationless frames (as they did so well last year) so also needed to prepare more sidebars – if you drill them in pairs and then put staples/nails into each of the pair (to take the tensioned nylon) it speeds the entire process … but nothing like as much as using a nail gun for assembly. I also now use wood glue on the joints, leaving just one bottom bar unglued and held in with gimp pins. This makes disassembly after steaming easier and means the frame can be used with a full sheet of foundation if needed.

I’ve not got round to making my own foundation starter strips this year. Instead, I’ve bought unwired brood foundation. A single sheet is easily sufficient for 10 frames and could probably be eked out further. At Thorne’s full price for premier quality unwired deep wax, the small strip of foundation in a foundationless frame costs costs about 1p (and much less if your association has a co-operative purchasing scheme, or you trade-in recovered wax). Cost is certainly not a reason to delay brood frame replacement.

Frame building is quite therapeutic when you have a bit of spare time. The large pile of neatly bundled, slightly fragrant pine is gradually reduced as the tottering pile of assembled frames grows. It’s far better to do this on a cold, wet winter day with the radio and copious mugs of tea for company than rushing around in late May when you’ll have much less time. Frames from the steamer … 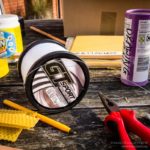 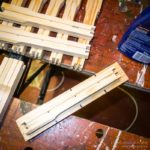 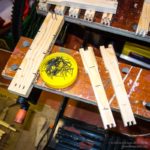 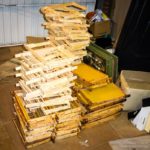 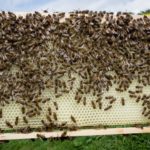 A discussion on the Scottish Beekeepers forums last year (and the price of foundation) prompted me to try foundationless frames. The general principle is that you build standard brood frames, reinforced with horizontal wires or fishing line, containing only a narrow starter strip of foundation. The bees build new comb, incorporating the strengthening wire or fishing line, without being constrained to the cell dimensions of the underlying foundation. The starter strip encourages them to build comb in the orientation you want. Without starter strips as guides it can be a bit of a free for all. 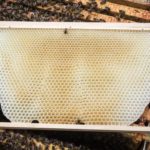 First impressions are very positive. During routine comb replacement or a Bailey comb change the frames have been drawn out very well, with beautiful near-white comb. The fishing line has been incorporated as intended and the comb appears reasonably robust – with the caveat that there have been no really hot days yet which can make the comb much softer. This shouldn’t be an issue once they’ve raised a couple of rounds of brood in it. The bees join the foundation to the side bars but often leave gaps at the bottom corners and/or along the bottom bars of the frames. They build a lot more drone comb, though the amount varies and reflects the strength of the colony. Very strong colonies seem to build much more drone comb, whereas nucs do not. I presume this is the bees regulating the colony composition as they want. The only problem I can foresee here is that drone brood removal will be less easy from one of these frames than by simply slicing off a lump of brace comb built on the bottom of a shallow frame.

During a recent Bailey comb change it was noticeable that the queen first started laying in newly drawn comb on a foundationless frame, rather than the flanking frames with commercial foundation. 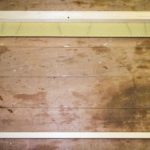 I build the frames from second-quality parts (purchased at one of the beekeeping shows). Since these cost about £27 for 50 and you use ten times less foundation I estimate 50 prepared foundationless frames cost about 60p each … in comparison, using first quality frames and full sheets of foundation they cost a fraction under £2 each. These costs are based on our co-operative purchasing scheme prices for foundation which are already pretty good. Take care to inspect the second quality frames if you get a chance. The wood needs to be sound but the dreaded off-centre foundation grooves (which otherwise mess up beespace with full sheets of foundation) can be safely ignored. I knocked a couple of 2″ nails into a block of wood to act a register points for the notch in the side bars. I then drill three roughly equally spaced 3mm holes through pairs of side bars. I’ve read elsewhere that the bottom wire/line support benefits from being closer to the bottom bars of the frame because – as explained above – the bees often do not completely seal the drawn comb to the base of the frame. Having assembled the frame in the conventional way I use 15kg fishing line secured with drawing pins or gimp pins rather than wire. There is at least one set of photos I’ve seen where the wire is relatively poorly incorporated into the drawn comb – I’ve not noticed this happening in any of the three dozen fishing line ‘wired’ frames I’ve used this spring. 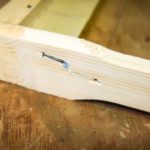 Tie a simple overhand loop in the end of the line, place it over one pin at the ‘top’ of the frame, hammer it home then thread the free end of the line through the frame. To secure at the end I pull the line tight and wrap the line half a dozen times round a second drawing pin before hammering it home. To stop the line cutting deeply into the soft frame side bars you can use standard staples (just like you use for holding sheets of paper together … nothing too industrial) which can easily be pushed into the wood. Alternatively, I’ve used gimp pins knocked in next to the hole and hammered flat. Remember you only need a staple/pin one the side of the hole. The fishing line needs to be tight enough to provide rigidity; not so tight you can play a tune on it. A standard sheet of foundation is about 20.5cm deep. I cut this into 2cm strips, easily cutting through the wire with a Stanley knife. I secure it in place under the top bar in exactly the same way you would fit a full sheet of foundation. I’m pretty sure you could use an even thinner strip as a template for the bees to start from. Michael Bush describes simply breaking the wedge out of the top bar and nailing it back perpendicular. There are also various suggestionss about using a strip of melted wax or a wedge shaped top bar. I suspect that a thin strip of foundation is probably the easiest of the lot … it might be even more economic to use unwired super foundation. STOP PRESS … they are now, and the foundationless frames worked a treat. Bees build comb vertically. When drawing out foundation they have little choice but to follow the sheet. In contrast, if there is a significant slope (presumably front to back) and you arrange frames the ‘warm way’ there is a danger that the beautifully clean comb they draw out will not fit between frames using foundation, or that you’ll not be able to turn the comb around without messing up the beespace. If the hive does slope front to back – for example to help water drain out (why is it getting in? Perhaps try a Kewl floor) – you should be able to avoid this by arranging the frames the ‘cold way’.

Chris Slade has an excellent account of building and using foundationless frames on the recommended Beekeeping afloat blog.

Tom Bick started an interesting thread on foundationless beekeeping on the Beekeeping Forum.

(Inevitably … he covers most things) Michael Bush also has lots of information of foundationless frames at Bush Bees. If you feed fondant rather than syrup in the autumn, or provide underweight colonies fondant in the spring, or use fondant to feed mini-nucs for queen rearing you’ll inevitably end up with leftover lumps. Some of these will be dry and pitted, some will have bits of bees embedded, some will have brace comb or lumps of propolis adhering. All can be used.

Just mix these leftovers 1:1 by weight with hot water to make syrup for spring feeding or – in my case – for Bailey comb changes. Fondant is about 85-90% sugar, so a 1:1 mix is actually a  bit thin, but it saves doing the maths accurately and will all be used. By mixing with boiling water from the kettle everything should be sterilised.

Just remember that all that wax and propolis will melt in the hot water and will form a scummy ‘tidemark’ around the edge of the saucepan. Ideally use a saucepan dedicated for the task or, like me, discover that a half cup of washing powder and some elbow grease will restore the pan to its original condition.