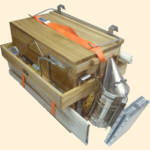 I’ve seen some wonderful examples of well-organised solutions to transport ‘stuff’ to and from the apiary. A place for everything and everything in its place. The ‘tool tidy’ trays are popular with some beekeepers and Thomas Bickerdike has previously blogged about his Rolls Royce box of goodies. The majority of these are boxes built by enthusiastic amateur beekeepers with demonstrably better DIY skills than I have, though some are available commercially (the one shown here is from Heather Bell Beekeeping Supplies in Cornwall for about £50). Some are even craftily based upon a 5-frame nuc box … though what you do with the contents should you have to use the nuc box is not clear.

However, these rigid containers always seem to have certain limitations to me. If they’re big enough to contain what you might need they’re likely to be cumbersome and awkward to carry. If they’re small and eminently portable you’ll probably end up with additional stuff in your pockets. And if they’re open-topped you’ll inevitably trip over a trailing bramble one day and spend the rest of the afternoon on your hands and knees looking for your queen clipping scissors in the long grass … and kneeling on a “crown of thorns” queen marking cage which you’d also dropped. 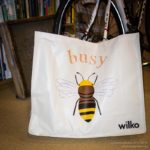 For years I’ve used one of those 20p ‘bags for life’ from the supermarket. These are nearly indestructible, at least semi-waterproof and reasonably capacious. If you’re happy to wear a beesuit you will, by definition, not be self-conscious about your appearance (“Does my bum look big in this?” Damn right). Therefore carrying a bulging bright blue polypropylene bag emblazoned with “Every little helps” should cause no embarrassment at all.

These bags are great. Cheap enough to replace without a second thought when you melt a hole through it with the smoker. Available more or less everywhere. Flexible to accommodate odd-shaped bits and pieces. Small enough to be convenient but big enough for the extras needed when grafting for queen rearing. Comfortable to carry. Wipe clean. I could go on … 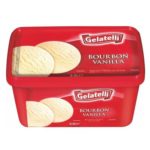 To provide a bit of internal order and coordination I use ice-cream containers to house the essentials, organised into boxes labelled ‘Daily’ and ‘Queen stuff’, indicating the usual role of their contents. This also means there’s less stuff to pick up should the bag contents be disgorged across your apiary. I recommend you take some time and care sourcing these containers … for example, you really should try Ben and Jerry’s cookie dough ice cream (though the container it comes in is wholly unsuitable being waxed cardboard). The best I’ve found is 2.5 litre Lidl Gelatelli vanilla … the box is excellent and the contents aren’t bad either†.

An additional box carries the things needed for grafting larvae, but this only goes into the bag when I’m queen rearing. A similar box is useful for offcuts of brace comb or propolis, though I usually end up squidging it into a lump and putting it into a plastic bag en route to the steam wax extractor. 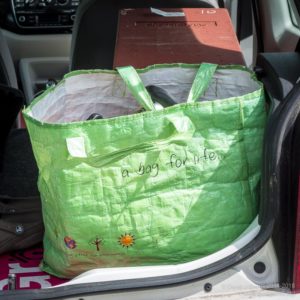 The queen stuff box contains the items that specifically relate to handling, marking and introducing queens, but excludes the things I use for grafting. So, this box contains Fiskars dressmaking snips (for queen clipping), blue, white and metallic pink Posca marking pens, queen marking cage, a variety of queen introduction cages (JzBz and Nicot), paperclips and a clingfilm-wrapped lump of queen candy.

Most ‘bags for life’ will easily accomodate two of these Lidl Gelatelli boxes end-to-end, with ample additional space underneath or down the sides for the following essentials:

Finally, there’s space on top of the Lidl ice cream boxes for the smoker, a blowtorch and a camera which I always take to the apiary.

Two things that don’t easily fit into the bag are the L-shaped hive entrance blocks I use on my kewl floors and smoker fuel. The former I usually leave in the apiary for use when needed and the latter gets its own bucket that stays in the car.

Why all those Posca pens?

I’m colourblind so just use white and blue pens on alternate years for queen marking. I find the red and green pen colours virtually indistinguishable and almost impossible to see in the mass of bees on the frame. The yellow is visible and very rarely gets used for queen marking but is useful to write notes on the hive roof, or mark frames as necessary. The metallic pink pen is used to mark queens going into an observation hive. 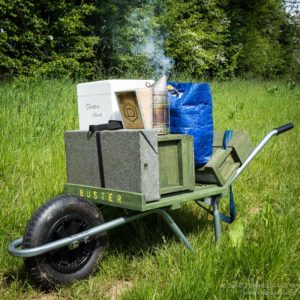 † though they may have stopped making this as I’ve not seen it for a few months.