Beekeeping is always more enjoyable if the bees you are handling are good quality. I’ve briefly discussed judging the quality and temperament of your bees when writing about record keeping. With experience, and in particular with comparisons between colonies, it’s possible to identify traits which make working with your bees more enjoyable.

Although I keep general records on colony build up, disease resistance and the like, the three behavioural traits I try and accurately score my bees on all relate to how pleasant they are to handle. These are temper, running on the comb and following. I score these on a scale of 1 to 5 (low to high) and any colony consistently at 3 or less will eventually require attention. Bees with poor temper or that run on the comb are unpleasant to inspect, making what should be an interesting activity a chore. Bees that ‘follow’ – dive bombing you dozens of metres away from the hives after an inspection – are a real pain. Aside from making your own post-inspection de-suiting risky they are a potential menace to others going near your apiary and so should not be tolerated.

It’s all in the genes … nearly

If you’re really unfortunate you can find bees showing all three traits simultaneously – stroppy, running, followers – but they’re more usually found individually. With all of these characteristics, assuming they’re not environmental (poor weather, no flow, queenless colonies etc.), requeening is the usual solution. Genetics and environment determine behaviour, and if the environment is OK, then the genetics need changing. You can do this by purchasing a new queen, by rearing your own by grafting, or – as described below – by splitting the colony and providing suitable young larvae for the queenless portion to rear the new queen from. I usually graft and rear queens from my best stock but resources – time largely, due to overseas work commitments – mean that all my queen rearing and replacement is being done by splits this season.

The mechanics of a split

I’ve described the mechanics of a conventional vertical split for swarm control and making increase previously. The colony is divided using a split or division board into two. The queenright ‘half’ gets the flying bees, the queenless ‘half’ starts to make new queen cells from very young larvae. ‘Half’ because this is an imprecise science in terms of bee numbers … top and bottom half of the colony might be a better description, though colony orientation is not proscribed. After one week the colony is manipulated to bleed off flying bees from the queenless half, both strengthening the queenright half and reducing the likelihood of swarming. Three weeks later there should be a new, mated laying queen present.

Split the colony as previously described. In this case I’d argue that the queenless half should be on the top of the stack of boxes as you’ll be inspecting it a couple of times. Make sure the queenright half has sufficient stores should conditions deteriorate as they’ll be short of foragers for the next week or so. Make sure that the queenless half has the majority of brood – sealed and unsealed – as you’ll need young bees over an extended period to rear new queens. 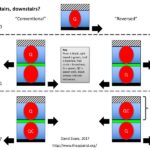 At the end of this initial manipulation the queenright half will use an entrance at the bottom of the stack, orientated in the opposite direction to the original hive entrance. The split board will have an entrance open at the original front of the hive. This is illustrated in the ‘reversed’ orientation on the right hand side of diagram (right). For a more comprehensive discussion of the orientation of the queenright and queenless portions see the recent post entitled Upstairs, downstairs?

One week later you need to carefully inspect the upper (queenless) box. Any and all queen cells must be found and destroyed. You will need to shake the bees off every frame to do this. These potential new queens were all reared from eggs and larvae laid by the original queen. Since 7 days have elapsed there will no longer be any suitable young larvae for the colony to rear a new queen. The maths are straightforward; a newly laid egg hatches after 3 days and larvae must be less than 3 days old to rear queens from. 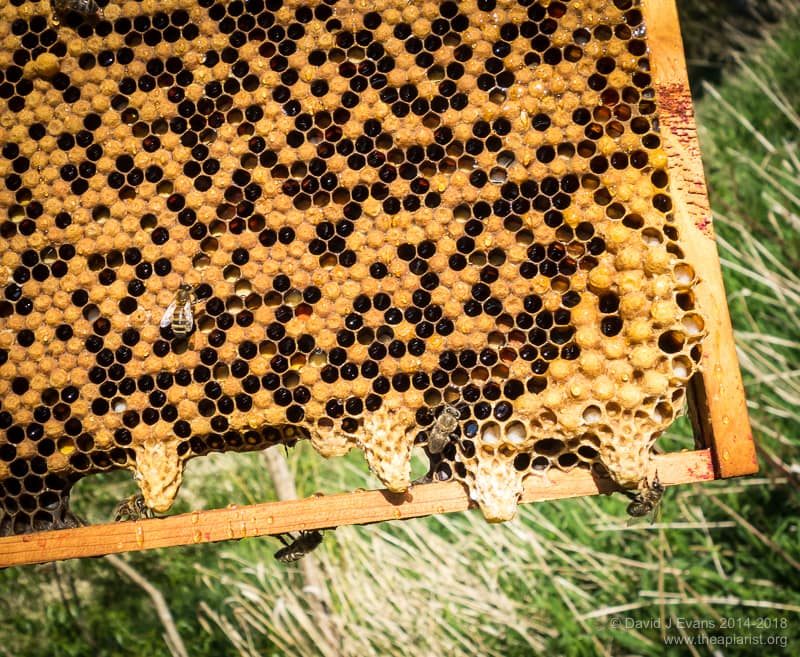 When returning the frames to the brood box leave a gap in the middle. Into this gap add a frame containing eggs and young larvae from a colony with desirable genetics i.e. good tempered, steady on the comb and none of those dreadful followers. Mark the frame so you can identify it again if needed. If you have a choice of frames to transfer use one with fresh new comb as the bees find this easier to manipulate when drawing out queen cells. 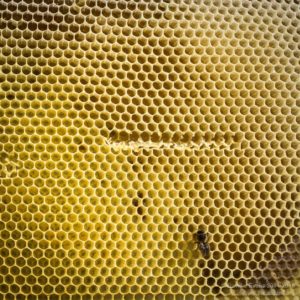 With the new frame of eggs/larvae added you’re now back on track to complete the vertical split. I’d suggest reversing the hive at the same time as you add the frame of ‘desirable’ larvae. There should be plenty of young bees in the upper half of the split and it’s these that will rear the new queen. The flying bees will strengthen the queenright half of the hive, helping gather nectar if there is a flow on. Make sure the queenright half of the hive has sufficient supers – you don’t want to be disturbing the colony too much, particularly in about 2-3 weeks which is when the new virgin queen will be going on her mating flight(s).

One week after adding the frame of new eggs and larvae there should be queen cells clearly present on the marked frame. If there aren’t it’s likely you missed a queen cell when shaking through the colony and there might be a newly emerged virgin running about in the hive. 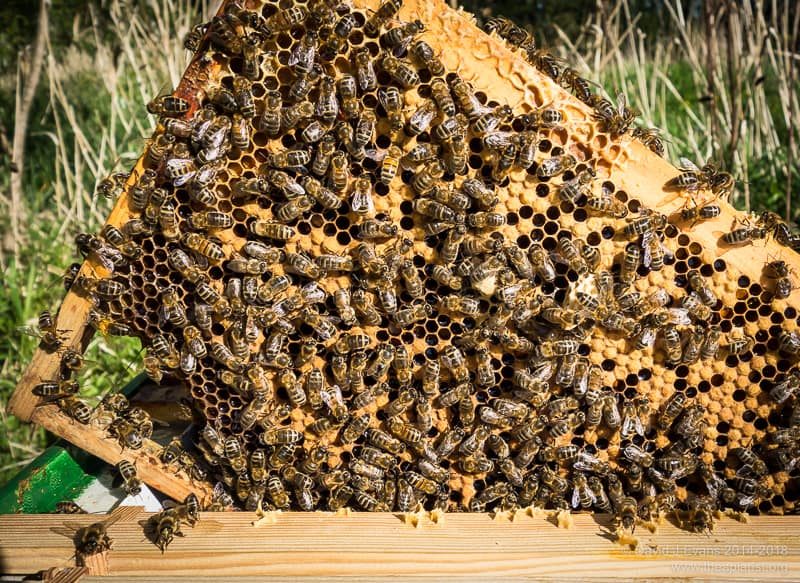 In which case, let’s hope she doesn’t rear bees that behave like those from her mother 😉