I bought a few of these Ashforth-style feeders† when I standardised on using Everynucs from Thorne’s a year or two ago. They’ve sat more or less unused since then, largely because the design of this poly nuc – a Langstroth-sized box adapted to take National frames – includes an integral feeder. This year I’ve used these nucs for queen mating and holding ‘spare’ queens when undertaking swarm control. Most of these have either migrated up to a full colony or been returned to the original hive, but I have a few left to take through the winter. These are now being fed up for the coming months. All are, or will be, housed in the bee shed overwinter for additional protection, though I’ve previously overwintered colonies in them outside reasonably successfully. 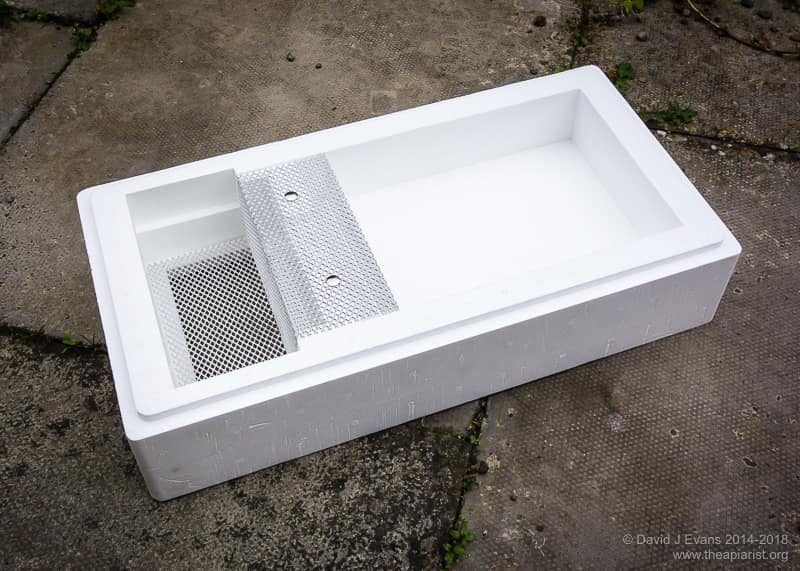 The feeder is well designed, with an opening at one end leading to a good-sized reservoir for syrup or fondant. The volume of the reservoir is a little more that 3.5 litres when filled to dangerously near the brim. When using syrup – which I don’t – there’s a folded wire mesh screen that should prevent the bees drowning. They can climb up and over the dam to reach the syrup, but don’t have free access to the reservoir. This should reduce that distressingly high ‘body count’ sometimes seen with badly designed feeders. Additionally, the mesh screen prevents bees from leaving the hive when the clear plastic crownboard is removed to top up the reservoir. Convenient  🙂 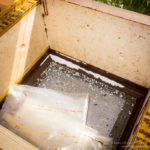 Like all poly hives, and particularly poly feeders, these should be painted before use (remember, Do as I say, don’t do as I do … some of mine aren’t painted due to poor planning). Syrup soaks into the poly if the surface isn’t sealed first. This can lead to problems with fungus growth and attack by rodents when the feeders are stored. As an aside, I try and remember to seal the entrances of my poly hives when not in use to prevent mice from destroying them … they seem very enthusiastic about having polystyrene chip parties at my expense. A couple of my poly bait hives have already been attacked this autumn – these just smell of bees and propolis (and now strongly of mouse 🙁 ) without the added attraction of syrup residues which would just make things worse.

The wire mesh screen on the Everynuc feeders is a bit ‘springy’ and probably needs holding in place with a couple of drawing pins (see image above). Additionally, both sides of the dam wall should also be painted and, when still wet, sprinkled with sand to improve the grip for bees accessing the syrup (as I show on the landing boards on my kewl floors). 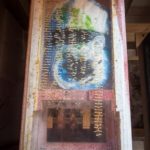 At one end of the feeder, opposite the syrup reservoir, is a well that can be filled with fondant if the wire mesh screen is fitted. My crude measurements suggest it should hold about 1.5 kg of fondant if packed in tight. It might be possible to directly carve off suitably sized lumps from an intact block but it’s easier to pack it with a variety of offcuts and squeeze them down. Bees are be able to access the fondant from underneath and adjacent to the dam wall. As with syrup, feeding them like this means the fondant can be topped up without bees escaping.

Alternatively (and see the next section) you can simply stuff a big lump of fondant into the well of the feeder and omit the wire mesh – as shown above. 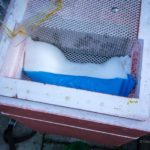 I had a few concerns about how well the bees would access the fondant through the mesh – might the fondant dry out too quickly, would access be restricted as the fondant block shrank in size etc? Therefore, before it got too cold I set a couple up of feeders with or without the mesh fitted to see how readily the bees could access and take down the fondant (this post was started in mid-September). Both methods seemed to work fine though I suspect feeding through the mesh directly above the frames is likely to work better as the weather cools further, simply because it’s less far for the bees to travel and likely to be a little bit warmer.

Peter Edwards has recently written a short article in BIBBA’s Bee Improvement on modifying the Miller-style† feeder supplied by Maisemores for their poly nuc. He simply drilled a series of ~25mm holes through the bottom of the one side of the feeder, leaving the other side unbutchered for delivering syrup if needed. A simple but effective solution ideally suited to Maisie’s double-sided feeder. Since I’m so wedded to the use of fondant for my autumn/winter feeding I may do this on a few of these Everynuc feeders as well … accepting that they’ll be trashed for use with syrup.

The last week has seen temperatures peaking in the low teens, with the first overnight frosts of the year. Active beekeeping is effectively over for the season. Colonies checked at the end of last week are taking fondant down well and two that I briefly inspected had reasonable levels of brood in all stages, wth the queen laying at a consistent rate albeit much less than earlier in the season. These new bees will help the colony get through the winter and – because mite treatments were completed several weeks ago – will have been reared in a hive with very low Varroa levels, ensuring they are protected from virulent strains of deformed wing virus. I have a couple more colonies to check in the next few days and one more nuc to move to the bee shed.

However, before the autumn tidying and winter tasks are started there’s still some reasonable weather to get out and enjoy the beautiful Fife countryside.

† The Ashforth-style feeder has the entrance at one end or side, the feeder with the double entrance in the middle is the Miller feeder.