The range of miticides available ‘off the shelf‘ to UK beekeepers has recently been increased by the introduction of Apitraz and Apivar.

‘Off the shelf’ because, until recently, these were only available with a veterinary prescription.

Considering the extensive coverage on this site of oxalic acid-containing miticides and more recent posts about the – regularly ineffective – Apistan, it seemed fair and appropriate to write something on the active ingredient and mode of action of these new products. 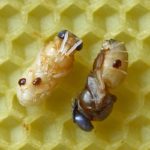 Conveniently, because the active ingredient is identical, these can be dealt with together in a single post. The similarities don’t end there. The amount of the active ingredient is the same and the way it is administered is very similar. They are different commercial products; Apitraz is distributed by Laboratorios Calier, SA and sold by BS Honeybees, Amitraz is distributed by Veto Pharma and sold by Thorne’s. The strips have a different appearance and a slightly different mechanism by which they are hung in the hive.

They even cost about the same – a single packet of 10 strips (sufficient to treat 5 hives) costs £30.50 and £31 respectively for Apitraz and Apivar.

The active ingredient in both Apitraz and Apivar is Amitraz.

Yes … I find these three names confusing similar as well 😉

Amitraz is a synthetic acaricide – a pesticide that kills mites and ticks. It was discovered and developed almost 50 years ago by the Boots Co. (the drug development predecessor of the Boots the Chemist 1 found in most high streets). Amitraz is the active ingredient in a range of medicines approved by the Veterinary Medicine Directorate, including Aludex and Certifect, both of which are used to treat mange in dogs.

For completeness I should add that Amitraz used to be used by US beekeepers and was sold as a generic pesticide under the name Taktic, though this was withdrawn in about 2014. I believe that Apivar is now available as a slow-release Amitraz-containing Varroa treatment in the US.

Amitraz has to be metabolised (essentially ‘modified’) before it is active. This modification occurs much less well in bees than in mites. In fact, the toxicity of Amitraz for bees has been determined to be about 7000 times less than in mites.

Once converted into an ‘active’ form the most important mechanism of action for Amitraz is through interaction with the alpha-adrenoreceptor and octopamine receptors of Varroa 2.

OK, since you asked … octopamine receptors normally bind a neurotransmitter called – rather unimaginatively – octopamine. Quelle surprise as an apiculteur would say. It’s likely that occupancy of these receptors by Amitraz triggers a series of so-called downstream events that change the behaviour of Varroa. Similarly, amitraz also acts as an agonist 3 when binding to the alpha-adrenoreceptor which normally interacts with catecholamines. This results in neurotoxicity and preconvulsant effects.

That all sounds a bit vague. Essentially, amitraz binds and activates receptors that are critically important in a range of important aspects of the Varroa activity and behaviour. Remember here that the mite is entirely dependent upon proper interaction with the bee to complete the life cycle. For example, if the mite fails to enter a cell at the correct time or doesn’t hitch a ride on a passing nurse bee for a few days, it will likely perish.

Amitraz changes behaviour and so exhibits miticidal activity. It has additional activities as well … these multiple routes of action may explain why resistance to amitraz is slow to develop. More on this later.

Both Apitraz and Apivar are formulated as plastic strips impregnated with amitraz. The bees must come into contact with the strips to transmit the amitraz around the hive. Two strips are therefore placed between frames approximately one-third of the way in from each side of the brood box – typically between frames 4 & 5 and 7 & 8 of an 11 frame box. This assumes the bees occupy the entire box. If they don’t, arrange the strips in the appropriate part of the box with 2 frames separating them. Both types of amitraz-containing strips have a means of securing them hanging between the frames.

The recommended treatment period is 6 (Apitraz, or Apivar with little/brood present) to 10 weeks (Apivar with brood present). As with Apistan, treatment should not be applied during a honey flow or when honey supers are present. Further details are included on the comprehensive instructions provided with both products. There’s also a reasonable amount of information on this New Zealand website for Apivar.

This is the good bit … very, very effective. When used properly, amitraz-containing miticides can kill up to 99% of the Varroa in a colony.

The good news first. Amitraz does not accumulate in wax to any significant extent. It is not wax-soluble. This is in contrast to Apistan which is found as a contaminant in most commercially-available beeswax foundation.

And now the bad news. Beekeepers also have alpha-adrenoreceptors and octopamine receptors. So do dogs and fish and bees. Although amitraz has increased specificity for the receptors in mites and ticks, it can also interact with the receptors in other organisms. Consequently, amitraz can be toxic. In fact, if you ingest enough it can be very toxic. Symptoms of amitraz intoxication include CNS depression, respiratory failure, miosis, hypothermia, hyperglycemia, loss of consciousness, vomiting and bradycardia.

And it can kill you.

Admittedly, the doses required to achieve this are large, but it’s worth being aware of what you’re dealing with. Amitraz-containing strips should be used only as described in the instructions for use, handled with gloves and discarded responsibly after use.

Multiple modes of action makes it much more difficult for resistance to evolve. But it can and does. Resistance to amitraz is well-documented and is understood at the molecular level. However, this is in cattle ticks, not Varroa.

At least, not yet, though there are numerous anecdotal reports of Varroa resistance.

I’ll deal with resistance in a separate post. It’s an important subject and avoiding it is a priority if amitraz-containing compounds are going to remain effective for Varroa control.

At about £6 per colony, amitraz-containing treatments are not significantly more expensive than the majority of other approved miticides, perhaps with the exception of Api-Bioxal which is appreciably less expensive (though more restricted in the ways it can effectively be administered 4). 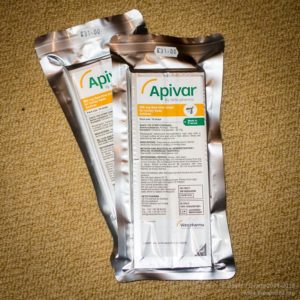 When you purchase a couple of packets of Apivar – enough for 10 colonies – it might feel expensive 5. However, it’s worth remembering that this is still less than the likely ‘profit’ on a couple of jars of your fabulous local honey per colony per year, which seems pretty reasonable in the overall scheme of things.

And, if you look after your colonies well, you are maximising the potential yield of honey in the future … so you’ll be able to afford it 😉