I’ve been using a Sublimox sublimator (vaporiser) since late 2014. In that time it’s worked faultlessly. There have been only two things that have needed any attention. These are the screws that hold the heat shield in place and replacement of the ‘O’ rings on the nylon cup you load with oxalic acid.

Actually, the other thing that needed attention was the heating chamber that became coated with caramelised glucose when I first used Api-Bioxal … but I’ve posted on that separately.

The heat shield protects the operator and your easy-to-melt poly hives from the metal heating chamber within which the oxalic acid is vaporised. It’s made out of folded, perforated metal and is held in place with two small retaining screws on the underside.

The heat shield can get a bit of a battering. The sublimator rests on it when the machine is laying on the side. More significantly it can get twisted or pulled if it gets caught on the edge of the hive when inverting it to deliver the oxalic acid. Inevitably, it is also subjected to repeated cycles of heating and cooling.

All of this tends to mean that the grub screws work loose over time. If the machine is cool they can be finger-tightened, but they’ll eventually loosen off again. 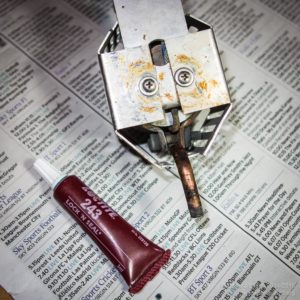 To rectify this and prevent their permanent loss in the apiary mud I gave them each a dab of Loctite 243 and tightened them up properly 1. This appears to have done the trick and they’ve remained in place without loosening.

The nylon cup you preload with oxalic acid has an O ring seated in a groove. This provides a gas-tight seal with the metal chamber in which the OA is vaporised.

It’s a tough life being an O ring.

It is subjected to a very harsh environment consisting of both high acidity and high temperatures. With repeated use the O rings become less able to form the gas-tight seal. They get thinner, crack and/or stiffen. Eventually they fail completely.

Once they have failed there’s a significant risk of vaporised oxalic acid escaping. Aside from potentially increasing operator exposure this also means that all that mite-destroying goodness is not being delivered where it does most harm (to the mites in the hive). 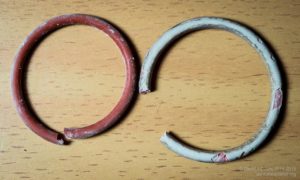 Replacement O rings can be purchased from the various suppliers of the Sublimox. Icko used to list them on their website but they appear to have disappeared for the moment. Abelo list them at £2 each.

As an alternative I’ve purchased and am testing some Viton O rings from eBay. Viton 75 is a “DuPont-manufactured fluorocarbon elastomer that exhibit excellent resistance to high temperature and many organic solvents and chemicals over a temperature range of -25°F to +400°F”.

Which sounds ideal for something that needs to work with oxalic acid at a temperature of about 160°C. The documentation from Dupont indicates that Viton has excellent resistance to oxalic acid.

I’ll post on how well these work sometime in the future.

Although not really a “spare or repair” it’s worth noting here that the Sublimox requires a 240V supply and so should always be used with an RCD (residual current device). This is particularly important since the apiary in winter is probably a damp (or worse) environment. An RCD, together with a bottle of water for cleaning the vaporiser, can just about be squeezed into the carry case. It’s therefore available whether you use a portable generator or an extension lead to the mains voltage supply.

As the season slowly starts, colonies will begin rearing more brood. You don’t need to open the colony up to determine this. Instead, insert a Varroa tray under the open mesh floor and look for thin rows of “biscuit crumbs” that are the cappings from emerging brood. 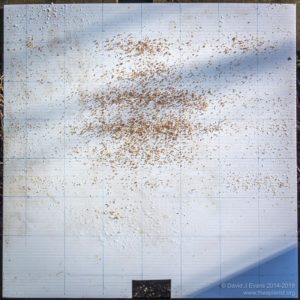 And, while you’re looking at this evidence that the long winter will soon be over, look carefully for any Varroa that have dropped from the colony. Mite drops should be very low if your autumn and midwinter treatment regime was effective.

You need to monitor for at least a week. With low mite numbers in the colony and small amounts of sealed brood the drop can fluctuate a bit.

If the mite drop is not low or non-existent there’s probably no need to treat immediately 2. However, make a note to monitor the colony at regular intervals – both for mites and overt DWV disease – and intervene if necessary.