Just when you thought it was safe to import bees again

The beetle was first detected in mid-September 2014 in the Calabria region. The following couple of months saw a further 60 reported infested apiaries in Calabria and neighbouring regions, with a single apiary in Sicily – containing migratory hives – in which the beetle was also detected. The Italian authorities surveyed over 1200 apiaries during the last four months of 2014 with over 3200 hives in infested apiaries being destroyed. Beekeepers were compensated, but this must have been devastating for those involved.

Then everything went quiet … Spring testing (March to May), which involved both a national surveillance programme and specific activity – including sentinel nucs – in Calabria and Sicily, didn’t detect any infested apiaries. 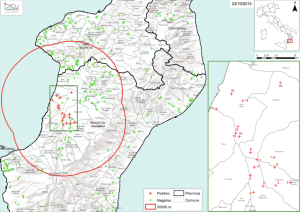 In mid-September this year (English link in the top right corner of page) an apiary was discovered with hives containing both larvae and adult beetles. At the time of writing (23/8/15) a further 16 infested apiaries have subsequently been discovered, all within the western part of Calabria (PDF map of the current situation) in the ‘toe’ of Italy. This is a disappointing development as it suggests strongly that the beetle remains well established in Italy and that eradication was not achieved.

An alternative suggestion – promoted by the Federazione Apicoltori Italiani (FAI) – is that this new detection represents a re-introduction of the beetle to Italy. This seems a bit far fetched … the infested apiaries are some distance from the coastal ports or large cargo airports but are instead slap-bang in the middle of the area with the largest number of infested apiaries in 2014. If it walks like a duck etc.

Unlike Varroa the beetle isn’t restricted to honeybee colonies. It can fly long distances (kilometres) and, although the larvae feed on pollen, brood and honey in the hive, they pupate outside the hive buried 10-20cm deep in soil and have been known to crawl 200m in search of suitable soil in which to pupate. Presumably the reappearance of the beetle in Italy is either due to low level infestations being missed or to beetles emerging after pupation and re-infesting colonies. Or both.

Probably not. I commented in a posting last November that:

“Once here it is unlikely that we will be able to eradicate SHB. The USA failed, Hawaii failed, Australia failed, Canada failed and it looks almost certain that Italy has failed.”

Indeed, the only time I’m aware that ‘eradication’ was achieved was when the beetle was introduced in an illegal shipment from queens to a single apiary in the UK. In addition to destroying the colonies, the ground was ploughed up, soil removed and the area drenched in insecticide1. I’m not aware in this case whether the beetles had even become established after introduction. In contrast, by the end of 2014 the beetle was widely distributed and well established and it is therefore not surprising, despite the concerted efforts of the Italian authorities, that they have failed to eradicate the beetle.

The National Bee Unit also consider that eradication is almost certainly impossible. In their excellent guide to the beetle (PDF), under the heading “Could we eradicate the Small Hive beetle from the UK?” they state:

“Probably not. Unless the Small hive beetle is detected very soon after its arrival, it will rapidly spread into the surrounding honey bee population, making eradication very difficult. A major limiting factor to eradication would be the unknown distribution of managed bee hives and the potential for populations of the beetle to survive in wild hosts (eg. feral bees and bumble bees).”

So what can be done?

In time-honoured EU tradition an export ban on the affected region had been imposed, but it’s seemingly difficult – if not impossible – to impose an import ban to protect our bees and beekeeping. My concern is that nucs or packages imported to the UK from a region not currently under an EU-imposed movement ban might introduce the beetle into this country. The original movement ban on Calabria and Sicily (actually, not on the entire areas, but instead lying within a 20km radius from the known infested apiaries) was due to end in November 2015. Had the beetle not been detected it would have been at least theoretically possible to import bees from these regions, either directly or indirectly, for the start of the 2016 season. Presumably the movement ban will be extended in light of the failure to eradicate.

It’s also worth noting that only about 10% of imports are checked as they come into the UK and that the volume of illegal imports is not known.

There’s already discussion on the various beekeeping web forums about “when, not if, the beetle arrives” and that UK beekeepers will “cope with it”, just as they’ve coped with Varroa*. There’s a sort of resigned acceptance that, sooner or later, SHB will arrive. If it does, I expect we’ll attempt eradication by destroying colonies in infested apiaries. Again, devastating for the beekeepers involved …

* This is a pretty weak statement in my view … although we do cope with Varroa I’m sure the vast majority of beekeepers would much prefer to not have to deal with the mite.

In the meantime, there are steps that can be taken to reduce the chances of the beetle arriving in the UK, or make us better prepared should it arrive. These include: 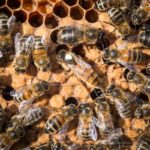 Obviously points 2-4 are all aimed at avoiding the need to import bees or queens. This is because the most likely route by which SHB will get to the UK is in imported nucs, packages, queens or other beekeeping materials (e.g. wax). Don’t believe some of the nonsense about ‘pupae in contaminated soil’ as the most likely route … the NBU have conducted a thorough risk assessment (PDF) and by far and away the most probable route the beetle will gain access to the UK is with bees or beekeeping (hive) products. Where known, this is how it got into all other countries that currently have the beetle.

Is there any good news?

Not about small hive beetle I’m afraid. Other than it’s not here … yet.

However, taking some of the steps listed above will both improve your beekeeping skills and provide lots of enjoyment. Queen rearing can be incredibly simple … you can modify a straightforward vertical split to generate a number of queen cells and divide these with some frames of bees and stores into nucs. No grafting, no handling anything smaller than a brood frame and no need to find the queen more than once. Simple, satisfying and self-sufficient …

Michael Palmer started a discussion on the Beesource forum with the prophetic words “The UK will soon have Small Hive Beetles in their area” helpfully requesting comparisons in climate between US locations that find the beetle a nuisance and those that do not. It’s worth watching. Clearly climate is only part of the equation … soil type – and temperature (as pointed out by knowledgeable contributors to the BKF thread on this) also has a significant influence, with the beetle preferring light and/or sandy soils to pupate in.