Beekeeping is – as the strapline to this site states – so much more than honey.

If you want to keep bees because …

Beekeeping, done well, is a fabulous example of working with nature and the environment. It’s a fascinating hobby 1. Every year brings new experiences and things to learn. 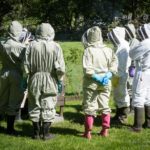 I think this component of beekeeping is under-emphasised when we train new beekeepers. I’ve grouped together a range of loosely-related posts under the heading of ‘the principles of beekeeping’. These tend to be longer articles, sometimes more discursive and often elaborating a personal opinion, which may be more or less controversial. Also listed are a few other posts that don’t fit easily within the pages on the practice of beekeeping, the problems encountered or the equipment used.