… pretty much describes my August. Having moved from the Midlands to Fife at the very end of July, with a new house and new job to sort out, I’ve had almost no spare time for my bees. Fortunately, August is usually a pretty quiet month. The swarming urge is more or less over and – with good weather – the colonies should be piling in the nectar. Unless you’re queen rearing – and I’m not – it’s a time to sit back and look forward to the fruits of their labours.

All the colonies I moved up in a van settled well in their new apiaries. The majority are in a temporary site while my beehouse (about which more in a later post) and main apiary are prepared. The remainder are in a friend’s garden, in a lovely sheltered South East facing spot. The fortnight after moving them the weather was very unsettled and there were reports on the SBAi forum about the risk of starvation. It’s been unseasonably wet throughout July (200% of the 30 year average rainfall) and there was nearly no nectar available. Large colonies were OK, surviving on their stores or even collecting a bit here and there. In contrast, nucs were very low on stores and dangerously close to starvation. I’ve noticed this type of threshold effect before, where only the larger colonies have sufficient foragers to exploit limited nectar sources. I know that others think that the colonies most at risk are those with a large proportion of open brood – whether nucs or full colonies. This might be the same thing, just described in a different way. These nucs were expanding fast and had quite a bit of open brood. I gave all of them a block or two of fondant, either dropped directly into the feeder of the Everynucs, or laid across the tops of the frames in Paynes poly nucs.

Within days the weather picked up, the colonies quickly used up their fondant and several of the larger nucs (the 8-framers in butchered Paynes poly nucs) all started running out of space. I moved these into full sized hives. At the same time the full colonies had started piling in the nectar so a few were given extra supers in the hope of getting a bit of honey late in the season. 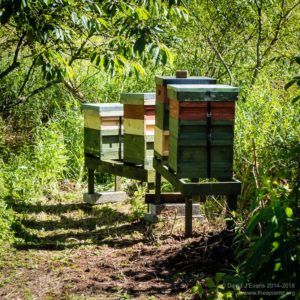 Give them more supers …

As soon as this period of settled weather looks like ending it’ll be time to start thinking about preparations for the winter. This means taking and extracting any honey, Varroa treatment and feeding up the colonies. I usually like to get my Varroa treatment completed early as Apiguard (which I routinely use) has a tendency to stop the queen from laying. On warm early autumn days the smell of thymol in Apiguard-treated hives can be overpowering. However, this year I’m going to use vaporised oxalic acid on the majority of colonies. I’ve used this a few times already this year – on colonies with undesirably high mite levels early in the season and on swarms – and think it’s very well tolerated by the colony, with no apparent interruption to egg laying by the queen. By treating three times at 5 day intervals – to account for the sealed brood in the colony – at the same time as I feed fondant I hope to let the queen lay well into the autumn, generating the all important winter bees that will get the colony through to the next season.

Note … this post has been sitting unfinished on my Mac for a week or more as I struggle with an endless pile of boxes to unpack. The weather looks to be gradually deteriorating and the supers will probably be taken off this weekend.

3 thoughts on “Not beekeeping …”