Soft set honey was often called creamed honey before that description was effectively outlawed – at least for labelling purposes – under the trade descriptions act because it ‘contains no cream‘. It’s the stuff that’s spoonable and spreadable, it feels like velvet on the tongue because the crystals are so fine (hence creamy) and it remains looking good for a long time. The long shelf life more than compensates for the (relatively small) effort required to produce it … you don’t have to sell it or give it away quickly before granulation takes over and the appearance is spoiled. Winter is a good time to prepare soft set honey as it requires low temperatures. 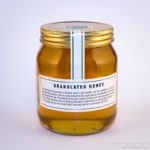 All honey granulates. At least, all honey that hasn’t been subjected to the sorts of heating and filtration used by commercial packers to produce a uniform and sometime bland product with a very long shelf life. The rate at which honey granulates is related to its composition. Honey with a relatively high glucose to fructose ratio – such as oil seed rape – granulates faster. Granulation is also influenced by temperature and particulates (e.g. pollen) that acts as a ‘seed’ for granulation. My honey carries a label indicating that granulation is a completely natural process and is a sign of high quality honey.

Soft set honey is honey in which the granulation has been controlled. A small amount (~10%) of honey with a soft, fine grain, is used as a ‘seed’ for liquid honey. As the latter granulates it takes on the consistency of the seed honey. The principle is straightforward and an industrial process was patented by Elton Dyce in the 1930’s. However, this requires rapid heating and cooling of bulk honey, something most beekeepers are unable to achieve. There are some good descriptions online about making soft set honey, including a useful video by ‘BeekeeperDevon’ on YouTube. There are also a lot of conflicting methods published and some that are, frankly, either nonsense or wrong.

This is how I do it … followed by some details on a few of the critical bits.

You need about 10% by weight of a suitable seed stock to make soft set honey. You can use more or less, it’s not critical. Much less than 5% and it won’t be enough to ensure even crystallisation, or will take a very long time to finally crystallise. More than 10% is unnecessary and you’d be better saving it for another batch of soft set honey. If you’ve not got a seed stock of a suitable consistency (by which I mean of the consistency you want your final soft set honey to have) you can make, borrow or buy some. 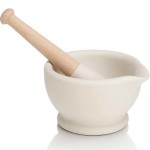 To make your seed stock grind hard set crystallised honey using a pestle and mortar until it has a wonderful, even consistency. It will start as hard unyielding lumps and end up with the consistency of thick toothpaste. This is hard work but you might only need to do it once, so do it well. You can borrow your seed stock from a neighbouring beekeeper who has something suitable, returning the same amount after you’ve prepared your own soft set honey. Finally, you could even buy your seed stock from a supermarket. If you insist on buying the starter, at least steer clear of the “mix of EU and non-EU” honeys (why don’t they just state “sourced from goodness knows where”?)  which could have just about anything in them. You are aiming to produce a top quality product. The type of honey you use as your seed stock is immaterial; it will only comprise a small amount of the final product, the consistency is what matters.

At 35ºC the prepared soft set honey will barely flow through the honey tap. However, with a little effort, and a long handled spoon to gently stir it, the thixotropic honey can usually be made to flow sufficiently to get it into jars. Again, to avoid frosting try not to mix air into the honey; hold the jar just under the honey tap with the bucket slightly inclined.

Keep about 3lb of your first batch of soft set honey – I use these useful sealable plastic containers – to use as the seed for your next bucket. This might be the following week or the following year – I’ve just used up the last of my 2014-prepared seed stock. If you’re preparing batch after batch of soft set honey on a weekly basis you can simply leave the seed stock in the bottom of the bucket with a tap. I’ve found silicone spatula spoons really useful for mixing honey, for getting the last few ounces out of the honey bucket and for quickly removing all the honey from the last three 1lb jars after you realise you’ve just bottled the seed stock for the next batch 😉