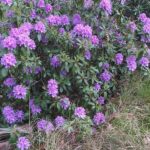 Over the next couple of years I will be establishing a new apiary in a region that is currently heavily overgrown with rhododendron. In moderation rhododendron are attractive evergreen ornamental shrubs that flower profusely for a short period in spring.

However, in many areas where rhododendron has been introduced, they have become highly invasive shrubs that have spread widely through seed dispersal and suckering.

As a beekeeper there are some interesting links between rhododendron, bees and honey.

The common rhododendron (Rhododendron ponticum) is native to Southern Europe and South West Asia. Although it was probably present in Great Britain before the last Ice Age it only became re-established after the late 18th Century when reintroduced by nurseries for ornamental gardens.

On the west coast, particularly in Snowdonia and western Scotland 1, rhododendron has become highly invasive, covering large areas of land and even entire hillsides. It swamps native trees and the development of understory growth by cutting out any light getting to the ground. In addition it poisons the soil to prevent competition from other plants.

Rhododendron is considered a major problem and grants are available for its removal. Estimated costs for eradication of rhododendron from Snowdonia and Argyll and Bute are £11M and £9.6M respectively 2.

It looks striking when it’s in flower … but for most of the year it just looks green.

Rhododendron … lots of it

Rhododendron are insect pollinated and produce large amounts of sugar-rich nectar to ‘reward’ visiting pollinators. A number of species of bees are known to pollinate rhododendron, including honey bees. Surprisingly – for an insect pollinated plant – rhododendron nectar contains high levels of diterpines which are toxic to many different animals. These types of toxins are usually produced by plants to reduce foliar grazing.

The most important (by amount) diterpine in rhododendron nectar is grayanotoxin.

Grayanotoxin is a neurotoxin. It works, i.e. its toxicity is due to, interference with voltage-gated sodium channels (VGSC) in neurones. We’ve discussed VGSC’s before in the context of resistance of Varroa to Apistan.

Although the modes of action of apistan and grayanotoxin are different, the consequences are not. If you block neuronal activity, stuff 3 that’s important often stops working properly – ‘stuff’ like the heart 🙁

Symptoms of grayanotoxin poisoning include cardiovascular problems, nausea, vomiting and loss of consciousness.

But wait, there’s more. Add to that heady mix one or more of the following … blurred vision, dizziness, hypersalivation, perspiration, weakness and paresthesia4 in the extremities and around the mouth.

In higher doses, symptoms can include loss of coordination and severe, progressive, muscular weakness. Fatalities are rare but not unknown.

These are all symptoms in humans experiencing grayanotoxin poisoning.

Great … could it possibly get worse?

Recent studies have suggested that grayanotoxins are also toxic for some bees. In these laboratory studies, honey bees fed syrup laced with field-realistic doses of grayanotoxin were twenty-times more likely to die than those fed undoctored syrup 5.

Note that this does not necessarily mean that honey bees foraging in the natural environment are twenty-times more likely to die.

The laboratory experiments effectively ‘force-fed’ bees syrup containing the toxin. Toxicity was monitored 6 hours post feeding. Perhaps they were hungry and, having no choice, ate the stuff 6 and consequently poisoned themselves.

In the natural environment there are probably a wide range of nectars available simultaneously. Perhaps the bees simply change their diet and choose these nectars instead?

I don’t think that this has been formally tested. At least, not yet.

It might be an interesting experiment to conduct. You could set up a feeding station with syrup, train the bees to use this sugar-rich source and then add grayanotoxins to the syrup. If the bees continue to gorge themselves on the toxin-laced syrup (and showed increased mortality) then they presumably either can’t taste the grayanotoxin or can, but don’t care 7.

Alternatively, they might switch away from the toxin-laced syrup and use other plant and tree nectars and, in doing so, not jeopardise their longevity.

Although this experiment hasn’t been conducted, we do have evidence that honey bees forage on nectar from rhododendron.

If bees forage on rhododendron the grayanotoxin-containing nectar would get processed in the hive to create toxin-laced honey 8. Since grayanotoxins are known to be toxic for humans this honey would be expected to exert some adverse, or at least interesting, effects.

And that’s exactly what is seen.

The most common cause of grayanotoxin poisoning in humans is from eating honey made by bees foraging on rhododendron. Small doses cause light-headedness and hallucinations. In large doses it is overtly toxic and induces the range of symptoms described above.

In Nepal and parts of Turkey this so-called ‘mad honey’ is deliberately produced. You can buy mad honey online … a snip at $199 for 250g 9.

As well as causing light headedness and hallucinations, mad honey is consumed – particularly in Turkey – because of its perceived therapeutic benefits for conditions such as diabetes, bowel disorders and hypertension. Perceived because I’m not sure there’s real evidence of benefits for any of these conditions.

The proof of the honey is in the eating

I don’t know. I guess I’ll find out. After all … there’s a lot of rhododendron.

There are a few disputed reports of honey toxicity case studies in the British Medical Journal. Some are very old and are suggested to actually be caused by fructose intolerance. There is also a reported Scottish case where a man licked rhododendron nectar from his hands and rapidly experienced paraesthesiae (‘pins and needles’), loss of coordination and an inability to stand, symptoms which resolved completely a few hours later 11.

However, I strongly suspect that a range of factors mean that although a beekeeper might be mad to try and produce honey in these areas, he or she would be unable to produce mad honey. Rhododendron blooms relatively early in the season, the climate of the UK and Nepal/Turkey are dramatically different and there are known to be significant strain-specific variations in grayanotoxin production between rhododendron.

On the island of Colonsay – the first black bee reserve – there are extensive tracts of invasive rhododendron and yet Andrew Abrahams, the local beekeeper, produces excellent heather honey there.

In the meantime I’m busy removing rhododendron from my site …