If something is described as a “A triumph of form over function†“ it looks better than it works. Here’s the diametric opposite – something that works really well, but looks a bit rubbish.

Wax extracted from old brood frames is often too dark to use for candle making. You can exchange it for cash or new foundation at Thorne’s – either at one of their regional stores or at the big beekeeping conventions. However, if you use a lot of foundationless frames you’re unlikely to need much foundation (by definition 😉 ). If you have the patience of a saint you could consider making your own starter strips. As an alternatively you use can this old, dark wax to prepare perfectly good firelighters for a wood burning stove. With British summer time ending sooner than you think§, now is as good a time as any to prepare a stock for the winter. 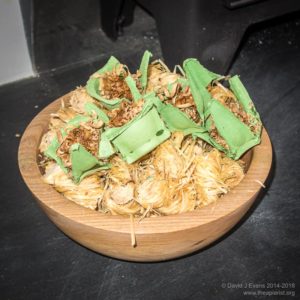 Guess which are handmade …

There are lots of suggested ‘recipes’ for these on the web. Many of these combine wax with pine cones, sometimes with the addition of a wick. By adding a few drops of essential oils to the melted wax you can create both an attractive and fragrant item to decorate your home.

Note I said “decorate your home”, not “light your wood burning stove”. Take it from me … they’re pretty hopeless as firelighters. Been there, sent a postcard. I’ve collected pine cones, dried them for weeks in the boiler room, wrapped a wick around them, dipped them in scented wax and been wholly unimpressed at how poor they are as firelighters.

Commercial firelighters for wood burning stoves are usually composed of a wax-dipped, twisted wood shavings. Flamers work very well. However, at £24 for 200 they’re not inexpensive – particularly for something that’s going to just sit next to the stove in a bowl and then, in the space of a few minutes, literally disappear in a ball of flame. 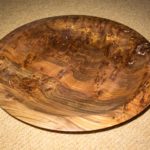 You’ll need some wood shavings, egg boxes and molten beeswax. You can buy the coarsest animal bedding material or – better still – find a friendly wood-turner and ask them to save some of their discarded shavings (which will also work well in your smoker). Melt the beeswax in a slow cooker or Bain Marie. Stuff the wood shavings reasonably tightly into the wells of the egg box and dribble liberally with melted wax.

If you want to make them slightly fragrant then add a few drops of juniper or patchouli essential oils to the melted wax before pouring it over the wood shavings. They’ll smell nice but they’ll still look rubbish. 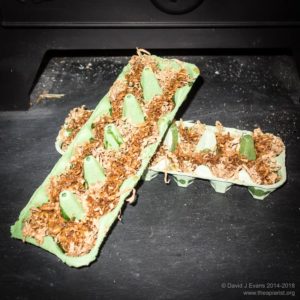 These are not the sort of things you’ll see featured in Homes and Gardens or Country Living. They are a triumph of function over form. Hide them away somewhere close to the stove. When needed, simply tear a ‘cell’ off the egg box, stack it onto the pile of kindling and logs (I’m an advocate of the ‘top down’ or Swiss style method of firelighting), light the blue touchpaper and retire‡ to an armchair to enjoy the fire.

I claim no originality for this idea. There are loads of websites with similar suggestions, using everything from sawdust to the lint from a spin-dryer as the flammable material. Some of them look even worse than mine 😉 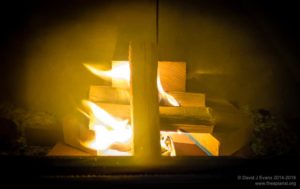 † This phrase is a bastardisation of the term form follows function originally used by the architect Louis Sullivan in an 1896 paper The Tall Office Building Artistically Considered. It became widely associated with modernist and industrial architectural design in the early 20th Century, essentially meaning that the shape of a building should reflect its primary purpose.

§ This post was written in the chilly early Spring with the intention of publishing it sometime in October (when BST ends). However, an extended period of travelling in late August and much of September meant I had to bring the date forward to post something vaguely useful (I hope) and  topical when I’d been doing no practical beekeeping for 3+ weeks. Coincidentally the date this appeared (22nd September 2017) is the autumn equinox … the date at which day and night are of approximate equal duration everywhere. About the time I’ll get the wood-burning stove going regularly.

‡ This phrase used to be the safety instructions on fireworks (and may still be for all I know) and became widely used as doing something incendiary. ‘Touchpaper’ was the paper fuse soaked in potassium or sodium nitrate.

Light my Fire was a 1967 song by The Doors that first appeared on their self-titled debut album.

But you knew that.

8 thoughts on “Light my fire”