The ivy is flowering well here and the bees are working it hard to collect late season pollen and nectar. On a walk last weekend every bush in the sun was alive with bees. 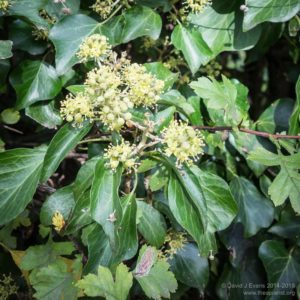 My colonies never collect enough ivy nectar to get much of a crop of honey from, but I’m told it’s an acquired taste. When it crystallises it sets rock hard and the bees often cannot or do not use it as stores during the winter. When you open the colony in the spring there is still a part-filled frame of hard dark honey, usually with a waxy appearance, from the previous season’s ivy.

By feeding relatively early in the season (mid/late August) I get the Varroa treatment completed with the intention of giving the bees time to generate those all-important overwintering bees once the queen starts laying again (Apiguard often slows or stops the queen from laying). Perhaps the brood box is already packed with stores? However, the ivy pollen is very useful, both for brood rearing now and for early spring. 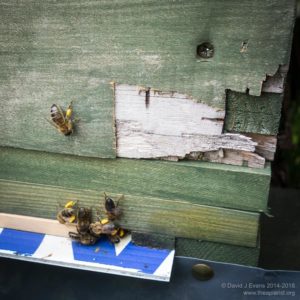 4 thoughts on “Ivy season is here”