… make sure your stored broods and supers have it. For that matter, your hives need it as well.

Early autumn is when wasps appear in droves. They gatecrash picnics and pester our bees as they search for carbohydrates. This year, after a pretty poor summer, they’re a bit later that usual … at least in this part of the UK. Queen wasps have now stopped rearing brood – which requires a protein-rich diet for the colony – and they’ve now switch to carb-bingeing.

My apiaries are away from my house, so the first thing I become aware of is the increased numbers of wasps investigating the stacked up piles of broods and supers. ‘Wet’ supers containing residual honey after extraction are very attractive to the wasps. They look for any structural weakness in the stack … a poorly fitting roof, a warped crownboard or gaps at the joints in the boxes.

If any of these provide access there will be a never-ending stream of wasps making return trips from their nest site – which may be up to a mile away – and the source of the honey. When you walk past the boxes you can sometimes hear the rustling or scratching of the wasps as they look for additional routes out once they’re laden with honey.

They can even chew through poly boxes where there’s a hint of  structural weakness to gain entry or subsequent exit from the pile. In the picture (above) the corner of the upper Swienty poly super – at the point where the hive tool had slightly indented the relatively soft polystyrene – was mercilessly attacked, leading to a neat chewed hole large enough to give the wasps access.

Maintain neat stacks of equipment, securely sealed at the base and the top. Try and avoid having an open mesh floor at the bottom of the stack, even if the entrance is sealed up. The scent of honey will still attract wasps from far and wide … and once they’re there they are very persistent.

I use sheets of spare Correx or solid split boards with all the entrances closed up tightly on the bottom of the stack. If you don’t have anything suitable a sheet of thick polythene forms a reasonably impenetrable barrier – to scent and wasps.

If there are gaps, and there probably will be as equipment ages and warps or gets bashed about, seal up the gaps as soon as you notice them. Waterproof gaffer tape is as good as anything for this as a temporary fix.

It’s not only the integrity of empty stacks of equipment that is being tested at this time of the season. Wasps will show similar levels of interest in colonies of all sizes – from double-brood monsters bulging with bees to mini-nucs containing only a cupful of workers and a queen.

Life’s a lot easier for the colony if they only have a single entrance to defend. Check the joints and junctions between boxes and seal any up where wasps might gain access. This includes the – entirely unnecessary in my view – ventilation holes in the roof. Unless these have well-fitted mesh there’s a chance the jaspers† can get in and from there to the honey supers if your crownboard also has another – entirely unnecessary – ventilation hole.

Life’s easier still for the colony if the entrance is small and/or easy to defend. The kewl floors I favour, with an “L-shaped” entrance tunnel, provide ample opportunity for the guard bees to challenge any inquisitive wasps – at the entrance per se, or where the tunnel opens into the brood box. I don’t think I’ve ever had to provide additional protection to full-sized colonies using one of these floors.

Small colonies, recently created colonies or colonies that are otherwise weakened are a different matter altogether. In all of these the colony is either understrength or lacking a full complement of worker types. 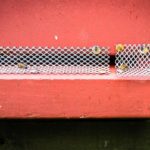 For example, newly created nucs containing a late-mated queen and a couple of frames of brood and adhering bees, may well not be up to defending themselves properly against the determined attention of wasps (which is the only sort of attention wasps are capable of).

Mini-nucs or queenless colonies are particularly susceptible and regularly succumb to attacks by wasps.

Maximise the opportunities these colonies have to defend themselves by restricting the entrance to a very narrow gap. The gaping maw of Thorne’s Everynucs definitely needs reduction, either by closing off 80% of it with grass stuffed into the gap (in an emergency) or using foam or Varroa mesh offcuts to achieve the same end.

Slopping large quantities of sugar-rich syrup about the apiary is a sure-fire way to attract the striped hordes. Make sure feeders are watertight (syrup-tight) and don’t leak. Pour carefully and mop up any spills that do occur.

I almost exclusively use fondant for late-season feeding. Spills are non-existent. The block is cut in half with a spade (or breadknife) and placed inverted on top of the colony. It takes seconds and works well. As an aside, you can feed fondant and treat with Apiguard at the same time – I’ve been asked about this recently.

Don’t leave offcuts of brace comb lying about in the apiary. Tidy up after you, don’t conduct unnecessary inspections or leave unattended frames propped up against the hive stand while you slowly go though a colony.

All of the above help the colonies avoid the attention of wasps … they also reduce the likelihood of colonies being robbed out by other bees, a topic I’ve mentioned before and will discuss in the future as it has very significant implications for disease transmission.

† Jasper is a slang name for wasps I was aware of as a boy in North London. The origin of the term appears unknown, but QI has an interesting discussion on it. It’s variously ascribed to Dorset, Lincolnshire (East Midlands), Yorkshire and Glasgow. It’s also not clear the derivation of the word … ‘jasper’ sounds like the genus Vespa which our common wasps belong to. Alternatively, there’s a striped mineral called Jasper which (potentially, though not to me) resembles the striped abdomen of wasps.