How about this for an apiary in a truly stunning location? 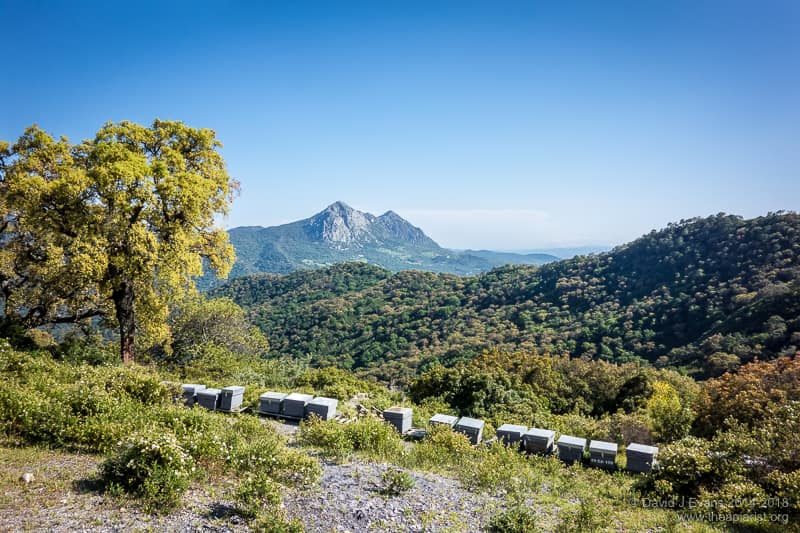 If Carlsberg did apiaries …

I discovered this apiary while out walking in the Andalucian hills in Southern Spain in mid-May. It was at the end of a forest track, miles from anywhere, with breathtaking views over the cork oak woods South towards the Strait of Gibraltar. It was a bit hazy that afternoon, but on a good day you can clearly see across the Strait to the Rif mountains in Morocco (~100 miles distant), with the faintest trace of the Middle Atlas beyond them.

Not just a pretty view

The photo doesn’t really do justice to the location of the apiary. Yes, the view was great, but what was at least as impressive was the amount of wildflowers around. It’s not an arable area. Most of the farmland was olive trees or lemons, with large areas of wildflower meadow and mixed deciduous woodland. Much of this was cork oak, but it was interspersed with Corsican pines and a variety of other things I couldn’t name. 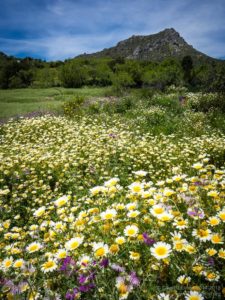 I’d be surprised if any of it ever sees a spray of any kind, and the only grazing is by horses, a few feral goats and the elusive wild boar 1. The scene on the right is typical and the road verges were the same, with acres and acres of these beautiful “weeds” everywhere.

Unsurprisingly, the other thing missing from these pictures is the noise.

Everywhere I walked – even on days when I barely left the fringes of the village – I was accompanied by the incessant drone of insects. There were bees everywhere and – again unsurprisingly – the local mixed floral honey was fantastic.

From a beekeeping point of view it really did seem idyllic. Perhaps the only issue would be the temperature. In Spring the midday temperatures were in the mid-20’s (°C) and – going by my experience of working colonies in the bee shed – that can get pretty hot and tiring in a bee suit.

There were about 20 hives in the apiary, lined up on pallets all in full sun. Unlike other apiaries in the area there was no registration number displayed, so it might have been a temporary site from which the hives would be moved in high summer.

To a beekeeper familiar with the stackable boxes of a National or Langstroth, the hives were unusual. The majority were single boxes, with hinged lids and one or two entrances low down at the front. 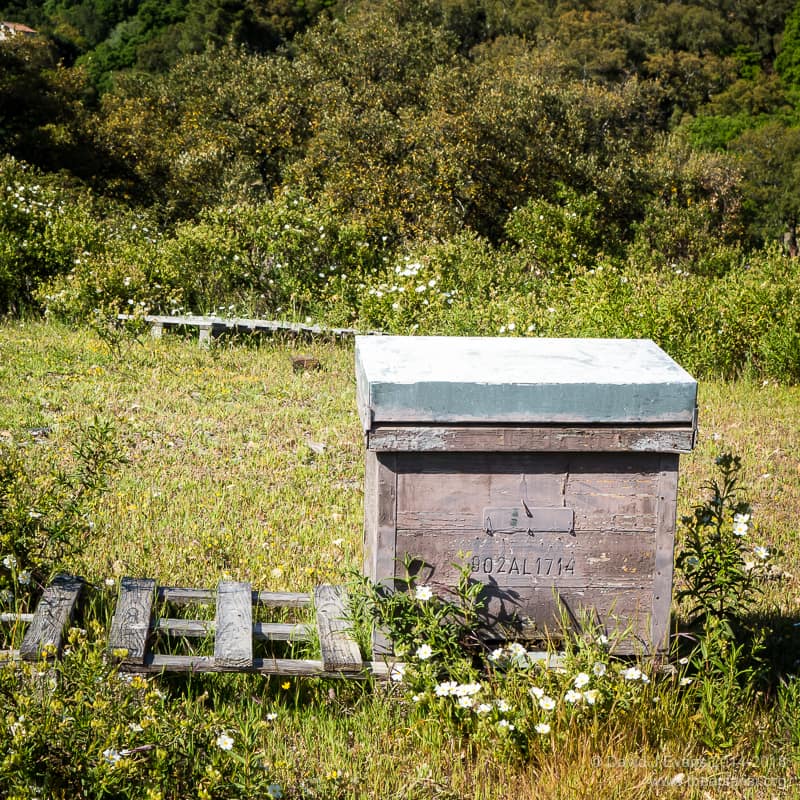 These are Layens hives, a single large, deep box containing 15 or more frames. Each frame is about the same width as a British National brood frame, but is almost twice as deep. Georges de Layens, who invented the hive in the 19th Century, designed it for minimal management beekeeping.

No weekly inspections, no overt swarm control, simply give the bees sufficient room in a well-insulated hive and return to harvest the honey at the end of the season.

Can it really be that simple?

Well, it certainly could be that simple.

However, Layens developed the hive long before Varroa appeared on the scene, and monitoring and managing disease in a hive with no removable or open mesh floor – particularly with only a couple of inspections a season – seems an unlikely recipe for success to me 2.

It’s reported that there are still more than a million Layens hives in use in Spain and the hive design has some strong supporters in the US 3. The hive design also lends itself to migratory beekeeping as there are no teetering stacks to be strapped together for transport.

Spanish readers of this site represent less than 0.5% of the annual visitors … if you are one of them please add a comment on the practicalities of beekeeping using the Layens hive.

But it’s not all sunshine and roses 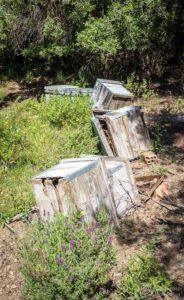 I’ve visited this area of Andalucia for several years. Near the village is an apiary that has – year by year – slowly been falling into disrepair. There were originally ~20 hives in lightly shaded woodland surrounded by wildflower meadows. It was a lovely spot, just off a little-used track, protected from the midday sun, secure yet accessible … though the view wasn’t a patch on the one at the top of the page.

Five years ago most hives – all Layens again – were busy with bees and I remember being surprised by the number of hornets hawking around. The apiary carried a registration number and the hives were scruffy, but functional.

Year by year the number of hives on their side, open, damaged or otherwise clearly defunct has gradually increased. Corners of the apiary filled with broken and discarded frames or other rubbish.

By this Spring it was all over. There were still about 20 hives in the apiary, but none of them were upright and functional. The few that were upright were non-functional and the only one containing bees was badly damaged and on its side, with the bees gaining access from a split in the corner.

It appeared as though the apiary had been abandoned by just about everything other than the Jabalí … and they’d had a field day ransacking the hives. 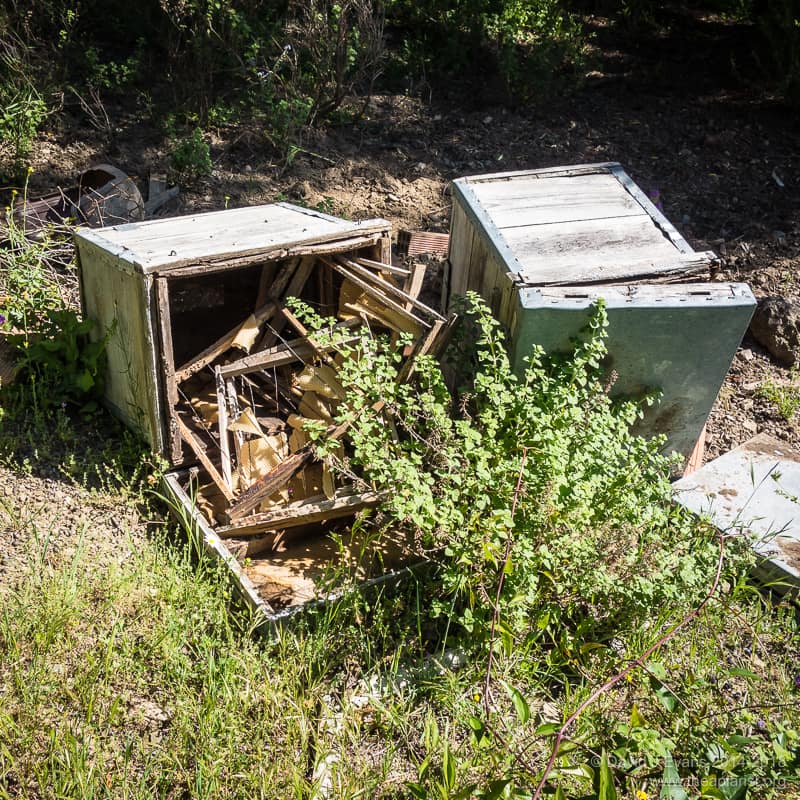 Of course, I don’t know the back story … an ageing beekeeper unable to cope any longer, hives inherited by someone without sufficient interest or beekeeping skills, or simply an unproductive apiary that was forgotten.

The hives were largely stripped out, but at one point must have posed a disease risk for neighbouring colonies. Unless mite levels were controlled the colonies would eventually succumb to Varroa-transmitted viruses. As the colony weakens it is likely to get robbed-out by strong colonies from nearby apiaries.

The robbers returning to their colonies carry honey and hitchhiking phoretic mites. This is what the Americans call a “mite bomb”.

There’s good evidence that this route of mite transmission peaks late in the season during a dearth of nectar. This is one of the reasons that justifies coordinated mite treatments at the correct time of the year to protect the winter bees.

I have no imagination … I’ve used the “If Carlsberg did …” prefix a couple of times already, when discussing smokers and vaporisers. I’ll try and think of something a little more original for the future. In my defence I have spent 50% of the last four weeks abroad, successfully controlled swarming (by vertical splits or Pagdens’) in over half of the ~25 colonies I’m currently managing, run out of supers, brood boxes and frames (D’oh!) and been involved in some exciting new plans for going Varroa-free in the future. Watch this space.

4 thoughts on “If Carlsberg did apiaries …”