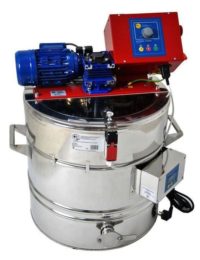 I’m conflicted. As a beekeeper I appreciate offsetting the cost of indulging my hobby from honey sales. In a good year I get much more honey than I could ever give away to friends and family. Despite making some of my own equipment, there are the costs of purchasing (yet more) boxes, miticides, extraction equipment and winter feed. There’s also an ever-growing wishlist of things that, whilst not essential, would be very welcome. Abelo’s heated honey creamer looks very nice 😉  Bottling, labelling and then selling honey – either from the door or from local shops – provides a few quid to help … a sort of self-perpetuating process in which I transfer all that summer effort by the bees into the coffers of Thorne’s and C. Wynne Jones.

However, I regularly get asked for local honey to ‘prevent the symptoms of hay fever’. Emails or phone calls go something like this:

“My son/daughter/husband/wife suffers really badly from hay fever and I read that locally produced honey could help her symptoms” … followed by a request to confirm that what they’ve read is correct and could I sell them some honey.

As a scientist I can’t do the former and so usually fail to achieve the latter. No way to run a business perhaps, but honesty is the best policy∑. 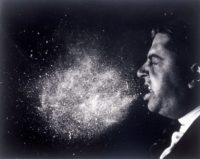 Hay fever is an allergic reaction to pollen in the air. About 20% of the population have, or will develop, hay fever. I never had it as a child, but in my 30’s developed a strong reaction to some grass pollens that still makes a fortnight or so in mid/late June pretty miserable. Hive inspections with bad hay fever are really miserable.

Symptoms are characteristic – itchy eyes, sneezing and a runny nose (where does all that stuff come from?!). Anti-histamines, either prescription or over-the-counter, help prevent the allergic reaction from occurring. Usually this is sufficient to make the symptoms bearable.

Severe hay fever symptoms, where anti-histamines or corticosteroids are insufficient, can be treated by immunotherapy. Over several months, the patient is exposed sub-cutaneously or orally, to low and increasing doses of the allergen (the compound that causes the allergy) to help develop immunity. Full desensitisation takes about three years.

Honey contains small amounts of pollen. The presence of the pollen forms the basis for lots of tricky questions in the BBKA examinations and is a feature used by food standards to discriminate between flavoured sugar syrup and real honey.

This is probably where the ‘honey prevents hay fever” stories originate. It’s this small amount of pollen that is supposed to stimulate the immune system of hay fever sufferers. A sort of DIY desensitisation course using toast or porridge to help deliver the allergen. Tasty 😉

All this seems pretty logical and straightforward. Honey contains pollen. Low doses of pollen are used to stimulate immunity that, in turn, stops hay fever from developing. Local honey prevents hay fever … I must get this printed on my labels to boost sales further.

Unfortunately, there are a couple of irritating facts that scupper this nice little theory. The first is  a sort of error of omission, the second is the absence of evidence supporting the theory (or, more accurately, the evidence that the theory is wrong).

Honey certainly contains pollen. At least, real honey does. Melissopalynologists – those who study the pollen in honey – can identify the genus of plants that the bees have been visiting and so may be able to deduce the geographic origin of the honey.

The key part of that last sentence is “that the bees have been visiting”. The vast majority of pollens in honey are from the flowers and trees that they visit to gather nectar. These pollens are usually large and sticky so they adhere to the passing bee and are then transferred to another plant when the bee moves on.

What’s missing are any significant quantities of pollens from wind-pollinated plants such as grasses. Studies have shown that almost all pollens that cause allergies such as hay fever are from these wind-pollinated species†. It’s logical that these pollens are largely absent … since the flowers, grasses and trees that produce them are anemophilous (wind-pollinated) they don’t need to generate nectar to attract bees, so the bees don’t visit. So there’s little or none of this type of pollen in honey.

So that’s the error of omission. What about scientific support, or otherwise, for the theory that local honey prevents hay fever? After all, this must be an easy (and tasty) experiment to do. Feed a group of people honey and compare their hay fever symptoms with a group fed synthetic honey (or perhaps imported pseudo-honey sold from a supermarket near you).

Researchers in Connecticut did this experiment in 2002. They published their results in a snappily-titled paper “Effect of ingestion of honey on symptoms of rhinoconjunctivitis” published in the Annals of Allergy, Asthma and Immunology.

Rhinoconjunctivitis, or perhaps more correctly, allergic rhinoconjunctivitis, is the symptoms of hay fever – the itchy eyes, sneezing and runny nose. Three groups of a dozen hay fever sufferers, pre-screened for reactivity to common wind-borne allergens, were randomly assigned to receive local ‘raw‘ honey, filtered non-local honey and honey-flavoured syrup (the placebo group). They took one tablespoon of honey, or substitute, a day and recorded their hay fever symptoms. The abstract of the paper neatly summarises the results:

Neither honey group experienced relief from their symptoms in excess of that seen in the placebo group.

… leading the authors to conclude that:

This study does not confirm the widely held belief that honey relieves the symptoms of allergic rhinoconjunctivitis.

Absence of evidence does not mean evidence of absence

So, this study does not confirm (prove) that honey prevents hay fever. What about the opposite? Can we use it as evidence that honey does not prevent hay fever symptoms? 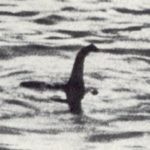 Tricky … as the skeptic James Randi asserted, you can’t prove a negative. I can’t prove that the Loch Ness Monster doesn’t exist. However, in the absence of convincing evidence that it does exist, I can be reasonably sure that Nessie is a 6th Century tale, embellished in the 19th Century and blatantly exploited by the 21st Century tourist industry.

Of course, lake monsters are ‘found’ worldwide, which isn’t evidence that any of them actually exist 😉

We’re getting into the messy intersection of science and philosophy here. I think it’s sufficient to say that there’s no scientific evidence that honey prevents hay fever. The Connecticut experiment was a properly controlled random study. To my mind (as a scientist) this is much more compelling evidence than any amount of anecdotal stories to the contrary.

An abbreviated version of which is what I tell potential customers who want me to confirm that buying my local honey will help alleviate their hay fever symptoms. Essentially, it won’t.

Why claim something that’s probably not true?

Far better to claim the things that are true, some of which are also clearly demonstrable:

The ‘taste test’ is usually the deciding factor. A couple of tester jars – clearly labelled – a limitless supply of plastic coffee stirrers and a discard pot will allow customers ample opportunity to ‘try before they buy’.

Which they surely will … 🙂

∑ Honesty is the best policy is an idiom dating back to the late 16th Century when Sir Edwin Sandys, a founder of the Virginia Company and one of the first settlers in America, stated “Our grosse conceipts, who think honestie the best policie”.

∞ A corruption of the saying by Mark Twain “Don’t let the facts get in the way of a good story”.

‡ This isn’t xenophobia. The UK is a net importer of honey. 95% of the honey eaten in the UK is imported – 50% of the 34,000 tonnes imported in 2012 came from China. Most honey on the supermarket shelves contains some rather vague term like Produce of EU and non-EU countries. You don’t know where it came from, and probably nor does the supermarket. There have been bans on imported honey due to it being not honey (just doctored corn syrup), or being contaminated with antibiotics.

10 thoughts on “Honey and hay fever”