The most viewed post on this site over recent weeks is about building a honey warming cabinet. Towards the end of the post I discuss the addition of a small mains powered fan to circulate the heat better. The fan is mounted attached to and under the bucket stand, circulating the air directly over the heating element. Out of interest, I conducted a quick experiment to determine how much influence the fan had on the heat distribution within the cabinet. 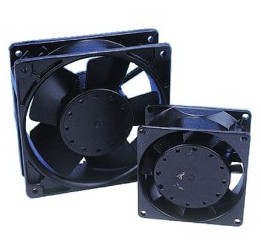 Using a remote temperature sensor I timed how long it took to get from ambient temperature (about 18oC on the day) to a stable 60oC, near the effective maximum due to the amount of insulation in my cabinet. With the fan on continuously this took 1 hours and 40 minutes. With the fan turned off this took almost twice as long. Since I was also aware that using the fan alone increased the temperature I measured the maximum temperature the cabinet reached without the heater on … in this case fractionally under 28oC, but this took well over two hours. The fan itself clearly generates a reasonable amount of heat which, in a well insulated container, pushes the temperature up (a bit like those foil-lined polystyrene ovens in which you can cook a chicken with a lightbulb). It should be noted that with a couple of 30 lb buckets full of honey in the cabinet all these times would be extended. However, it clearly shows that the addition of an inexpensive fan is a worthwhile addition to a DIY honey warming cabinet.

Although more difficult to monitor, the presence of the fan also makes the temperature fluctuations markedly smaller. With the fan running and the thermostat set correctly the cabinet will maintain 33oC +/- less than 1oC, making it suitable for incubating queen cells. You need to maintain high humidity levels to avoid drying the cells and the newly-emerged queens need to be used promptly.

The fan I use was purchased in the Maplin sale for about a fiver. The list price is three times that, so it might pay to shop around. It would also be possible to piratise an unwanted 12V fan from an old PC, but you would have to take the power supply as well. 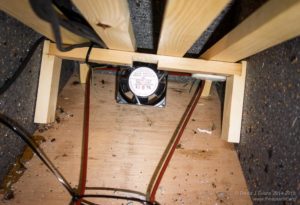