Beehives are full of things that get all over your hands – honey, propolis and bees. Most beekeepers therefore wear gloves.

How to get stung

Perhaps surprisingly – at least for beginners – protection from stings is probably the least important thing that gloves provide. 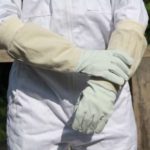 Surely not? What about those huge leather welders gauntlets? Thick impenetrable leather, heavily stitched seams along the sides of the fingers, protection up to the elbows. You’re certainly not going feel the stings through those.

Yes … but you will get stung.

You’ll get stung because you’ll have “hands like feet” as my graduate students used to say of my laboratory skills. You will have little manual dexterity, no real tactile ability and – probably – poor grip as the leather becomes hardened with age.

Consequently, the bees will sting the gloves (but not you) as you fumble about handling the frames, inadvertently squashing bees under your fingers, or the frame lugs. The alarm pheromone released will agitate the colony and you – or rather the gloves – will get stung again. And again.

What’s more, unless you carefully wash the gauntlets between inspections, the lingering alarm pheromone will agitate the next colony you inspect … before you’ve even had an opportunity to squash a few more bees.

How not to get stung

Paradoxically, I think the best way to avoid being stung is to use thin gloves. You’ll have better grip, much better dexterity and a hugely enhanced tactile awareness of what’s happening in and around your fingers.

You’ll be able to feel individual bees. Unsurprisingly, they buzz in an agitated way if you start to squash them. You probably won’t hear it above the noise of her 25,000 half-sisters that are also in the hive.

But you’ll feel it.

Consequently, you’ll be able to move your fingers slightly, allowing the bee to move before you lower the frame back into position.

Of course, the other two things that help you not get stung is having well-tempered bees and learning how to carefully inspect a colony. These points should be self-evident. If your bees are naturally belligerent or you bash the frames about clumsily you are much more likely to get stung.

The combination of thin gloves, gentle bees and good beekeeping makes weekly inspections a real pleasure … for you and the bees 1. 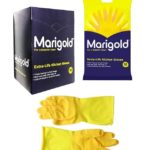 Standard washing up gloves provide a good combination of protection and sensitivity. Buy them so they’re a reasonably snug fit. I usually buy the bright yellow “Extra Life” kitchen gloves which you can find for less than £2 a pair. With care and with minimal washing they’ll last half a season. Of course, there are hundreds of alternative kitchen ‘rubber’ gloves. Try several. I like the makes with the rolled cuff as they don’t ride down my arm as much, so protecting that super-sensitive (to stings) wrist area. The Lidl ones I’ve tried lack this rolled cuff and were a poor fit.

I strongly advise you do not buy the Marigold Extra Tough outdoor gloves. Yes, they’re thicker and so provide even more protection. But that extra thickness markedly reduces sensitivity. More importantly, they’re black so your hands look like the paws of a bear and the bees will give you a hammering anyway 😉

Bees can sting through standard Marigolds. However, the sting cannot usually get embedded into your skin. Consequently, you feel a tiny pinprick – a reminder that you’ve been a bit clumsy perhaps – but little else. 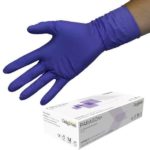 Even better in terms of sensitivity are gloves made from latex or nitrile. These are very thin, provide excellent grip and still give some protection. Powder free nitrile are probably to be preferred as repeated use of latex gloves can lead to allergic reactions.

You can buy long cuff nitrile gloves in boxes of 50 or 100 for about £10 per hundred, or much cheaper if you arrange to buy in bulk through your association.

Do buy the long cuff versions. Some of the nitrile gloves sold through beekeeping suppliers are short cuff (and are much more expensive per pair if bought in small amounts). The longer cuffs pull over the cuffs of your beesuit and protect your wrists.

Nitrile gloves can be reused time and again, though they’re much less resilient than Marigolds. They eventually lose their slight stretch and either go super-baggy at the wrist, or you pull your hand through the glove when putting them on.

Gloves get dirty. Propolis gets caked on the outside and, particularly on a sweltering hot midsummer day, you’ll fill them with sweat if you use them for prolonged periods. I rinse them in washing soda solution after use and then turn them inside-out to dry … usually stuffed into my beesuit pocket or dropped in the bee bag.

I use separate pairs for each apiary, not each hive. This probably isn’t ideal in terms of apiary hygiene, but I rationalise it because I’m aware of the very high level of drifting of bees between adjacent colonies.

It’s also much, much more difficult to pull on a new pair of nitriles if your hands are soaking wet with sweat … so not changing them is also a pragmatic decision.

If they’re heavily soiled with propolis it’s probably best to simply chuck them out, though you can freeze them and then easily peel it away.

I’ve never worn gauntlets for beekeeping. I’ve tried them on many times. Since I can’t easily pick up a pen wearing them I’m not going to try picking up a frame by the lugs. In contrast, with nitriles you can easily pick up the queen, for example for marking. You can also usually pick her up with a bit of care when wearing Marigolds.

Not my bees of course 😉

The colony that goes absolutely postal when you lift the crownboard 2.

Under these circumstances I simply wear two pairs of Marigolds. I’ve never needed anything more. They’re effectively impenetrable to stings. 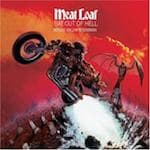 Bat out of hell

Two out of three ain’t bad is a track by Meat Loaf from his 1977 album Bat out of hell. It seemed appropriate as two of the three types of gloves described “ain’t bad”. Bat out of hell, the first of a trilogy of albums that together have sold more than 50 million copies, was a collaboration between Meat Loaf and the lyricist Jim Steinman. It was produced by Todd Rundgren. It’s a great album to crank up loud and sing (badly) to driving back late at night from beekeeping talks.