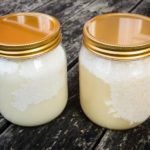 Frosting is the name given to small air bubbles that get trapped between honey and the side or shoulder of the jar. It spoils the appearance of the honey, but doesn’t alter the flavour or the quality. Frosting in honey usually starts as a small white streak or crescent on the shoulder of the jar, but gradually spreads during storage, sometimes covering most or all of the inner surface of the jar.  Some buyers don’t mind it, particularly if they’ve tasted your honey before, but I suspect that it puts others off (unsurprisingly, no-one receiving honey as a gift ever murmurs a word of complaint if the jar is frosted … funny that). Because I think set and soft-set honey looks better if the jar isn’t frosted I try and prevent it forming in the first place, or do my best to remove it in jars for sale.

I’ve yet to find a foolproof way of preparing set or soft-set honey that definitely will not develop frosting. Some batches I’ve made have remained ‘frosting-free’ for months, but most do in due course. However, the following things are supposed to work and probably help:

Of the four suggestions above, the last one is probably the most dependable. 30 lb buckets of honey are easy to store and take up little space. 30 lb of jarred honey weighs about 43 lb (assuming 1 lb ’rounds’), takes up a lot more space, requires much more handling and will usually develop frosting during extended storage.

Warm jars with set honey to about 37°C for 24 hours. The honey should become less viscous and would pour very slowly from the jar if you inverted it. Don’t 😉 You do not want to melt the honey, but instead just warm it sufficiently so that it can be stirred. Using a clean long-handled teaspoon – both for leverage and to stop getting honey on your fingers – gently stir the honey sufficiently to mix the bubbles in, working carefully round the sidewall of the jar to ensure it’s mixed evenly. The honey should be thick enough to stand the spoon in it, so you need quite strong fingers. Scrape excess honey from the spoon back into the jar using a small flexible spatula. Return the jars to the honey warming cabinet for another 24 hours, then store as usual. This is quite a bit of work and you really should try and avoid having to do it. However, if it makes the jarred honey more attractive and helps sell more jars then it’s a worthwhile investment of time. 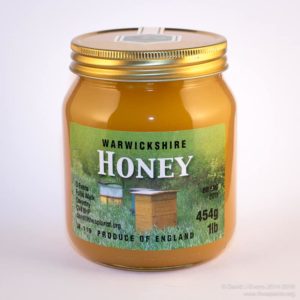 5 thoughts on “Frosting in honey”