An inexperienced beekeeper will carefully scrutinise every frame, turning it end over end with the half-way rotation they were taught during the midwinter beekeeping beginners course they attended. They’ll examine the end bars and the bottom bar. They’ll look again at either side of the frame and will then slowly return it to the box.

And they usually do.

No, experience. And not necessarily in actually spotting the queen. Mostly this experience is in better handling of the colony in a way that maximises the chances of seeing the queen.

In the couple of paragraphs above I hinted at these differences. The beginner goes through the entire brood box thoroughly. The experienced beekeeper ‘cuts to the chase’ and splits the box at or near the middle of the brood nest.

The beginner takes time over the scrutiny of every frame. The time taken by the beginner – probably coupled with additional smoking of the hive – disturbs the colony. Disturbance results in the bees becoming agitated, which causes the beginner to give them a couple more puffs of smoke … all of which unsettles the colony (and the queen) further. Ad infinitum.

Focus where needed, skip the rest

With minimal disturbance the queen will be in or around the brood nest. She’ll almost certainly be on a frame with eggs, young larvae and ‘polished’ cells. Polished cells are those that have been prepared by the workers ready for the queen to lay in. They usually have a distinctive shiny appearance to the inner walls; this is particularly easy to see if the comb is old and dark.

There’s little chance the (undisturbed) queen will be on sealed brood and even less chance she’ll be wandering around on frames of stores. All that time taken by the beginner examining a frame of sealed stores contributes to the disturbance of the colony and reduces the likelihood of the queen being where she should be.

The experienced beekeeper splits the box at or near where s/he expects to find eggs and very young brood. There’s probably only a couple of frames in the box that are at the right stage and it’s experience – of the concentration of bees in the seams and the behaviour of those bees – that allows most of the other frames to be safely ignored.

The reality is that, during routine inspections, finding the queen is not necessary. The only times you have to find her is when you’re going to manipulate the hive or colony in a way that necessitates knowing where the queen is e.g. an artificial swarm or vertical split.

The rest of the time it’s sufficient to just look for the evidence that the queen is present. The first of these is the general temperament of the colony. Queenless colonies are usually less well tempered. However, this isn’t alone a dependable sign as lots of other things can change the temper of the colony for the worse e.g. the weather or a strong nectar flow stopping.

The key thing to look for is the presence of eggs in the colony. If they are seen the queen must have been present within the last 3 days. In addition, the orientation of the eggs – standing near vertically or lying more horizontally – can provide more accurate timing. Eggs start vertical and end horizontal over the three days before they hatch. This is usually sufficient evidence that the queen is present.

Of course, just finding eggs isn’t sufficient evidence that the colony isn’t thinking of swarming. To determine that there are other things to check for e.g. the rate at which eggs are being laid and the presence or absence of queen cells, but I’ll deal with these in more detail some other time.

If you still feel the need to see the queen on every inspection my advice is to stop looking for her … at least consciously. Instead, concentrate on what really matters. Look for the evidence that the colony is queenright, by comparison with your notes work out whether the queen is laying more or less than at the last inspection, observe the laying pattern and look for signs of brood diseases.

By doing this you’ll predominantly be concentrating on the frames the queen is most likely to be on anyway. By doing this with minimal disruption to the colony the queen should remain undisturbed. Instead of running around frantically she’ll be calmly seeking out polished cells to lay eggs in. Therefore your chances of finding the queen are increased.

Observe the behaviour of bees to other bees on the frame – not by staring at every bee, but by quickly scanning for normal and unusual behaviour. Get used to the rate they walk about on the frames, their pattern of movement and how closely they approach each other.

When undisturbed, the queen is the one that looks out of place. She’s bigger of course, she walks about with more purpose and often more slowly than other bees. The workers make way for her, often parting as she approaches and closing up again as she passes. She may stop regularly to inspect cells or to lay eggs. Bees may be more attentive to her than to other bees. She’s the odd one out.

If you’re intent on finding the queen, stop searching and start seeing.

May the force be with you. 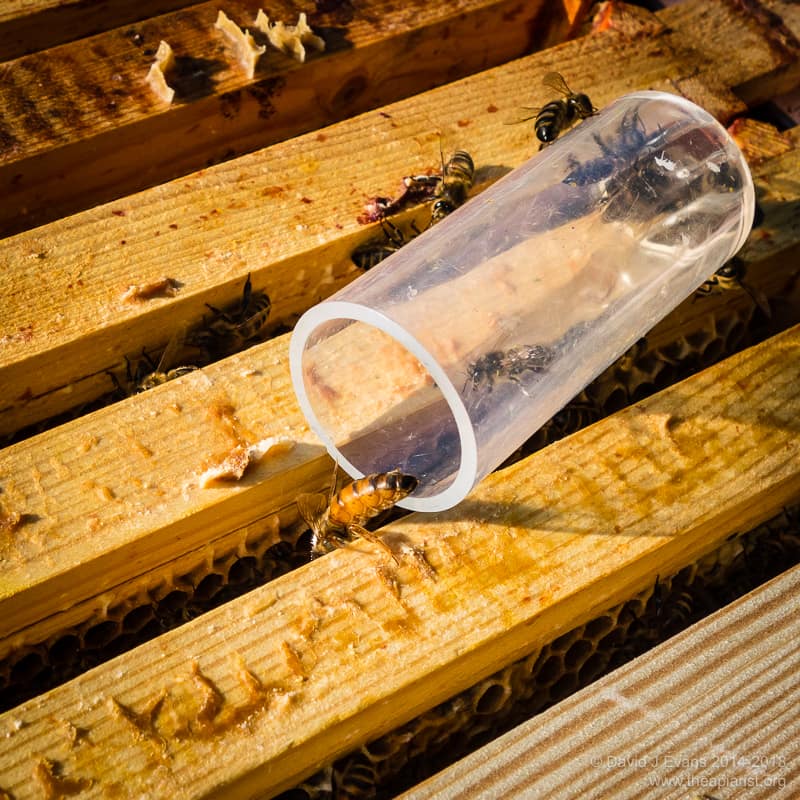 14 thoughts on “Finding the queen”