Can you have too many dummy boards? Well, obviously you can, but having made half a dozen last winter and another three last night I’ve yet to suffer from an excess of them. In fact, I’m going to have to make some more this weekend. 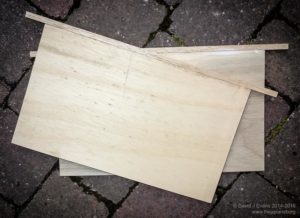 I’ve run out of dummy boards this year for three reasons. Firstly, I’m using the Demaree method for swarm control much more and so have two brood boxes to control free space in (and I usually remove frames of stores in the top box). Secondly, I’ve been using three frame nucs for queen mating, some of which are in five frame nuc boxes. Finally, with several swarms captured in bait hives, my colony count has increased.

Dummy boards are brood-frame-sized (length and height, but not thickness) pieces of something, with a simple top bar. The something is probably ideally a nice piece of red cedar about a centimetre thick. However, all mine are 9mm plywood from the offcuts bin in my local timber merchant, or stuff I’ve recovered by dumpster diving during refurbishments at work (I have no shame). I cut a piece 355 mm x 205 mm and simply glue and nail a top bar from 9mm stripwood along the longest, straightest edge. 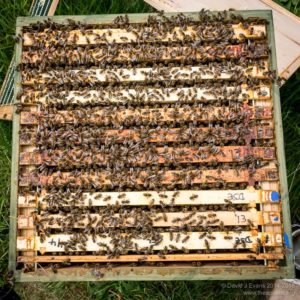 Eleven frames plus dummy board …

I’ve seen all sorts of designs on the web. Some made from a Correx-lined standard brood frame, some with side spacers and some with insulation. Although there is a case to fill a large amount of excess space with something like an insulated fat dummy (e.g. when housing a nuc-sized colony in a full brood box) most of the time a dummy board will simply be occupying a small strip of space that would otherwise be filled with brace comb. Typically this is when you have eleven brood frames in a National-sized box. When new, you can squeeze a dozen frames in. However, as soon as there’s some propolis it gets nearly impossible to add or remove the last frame without rolling bees. In this case it’s better to use eleven frames and a dummy board.

Spacers and any other embellishments seem totally superfluous to me. If there’s space for a full frame I’ll use a full frame, so why purchase a full frame dummy board lined with Correx? If I want the dummy board to be a certain distance from the adjacent frame I’ll put it there … and in a couple of hours the bees will have propolised it into place. Finally, if you use poly nucs, or have roofing felt on the roofs of adjacent hives in the apiary, a dummy board makes a great place to stand the smoker when not in use during inspections (from experience I can confirm that neither poly nor roofing felt appreciates exposure to a hot smoker 🙁 ).

Note: After writing this I checked the price of dummy boards with major beekeeping equipment suppliers (I’m thinking of writing about beekeeping economics in the winter) and was horrified to see that they varied between £5.75 and £6.12. Dummy boards are the perfect example of something that is well worth making … even more so because the most expensive one is plastic, so would melt under my smoker 😉