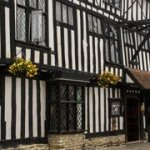 I’m delighted to be speaking at the  CABK Stratford Conference (the Central Association of Beekeepers; Bringing Science to the Beekeeper) on Saturday and Sunday 22/23 November 2014. I’ll be discussing the identification of a virulent strain of deformed wing virus, characteristics of its transmission and potential ways it might be controlled in the future. The CABK website doesn’t yet appear to list other speakers, but the provisional programme I’ve seen lists Alison Haughton from Rothamsted, Ben Jones from FERA, Jochen Plugfelder from Bern and Bob Smith from Kent.

There should be ample time for discussions so please introduce yourself if you want to chat.

Despite the best efforts of the Falcon Hotel (who appeared to have reserved far too few rooms for the registered delegates) the meeting was very enjoyable. The talks I heard were excellent, with ample time for discussion. In particular I enjoyed listening to Bob Smith who showed us the differences between DN5 frames from two of the major manufacturers … one made to British Standard sizes with the wrong beespace (Thorne’s), and the other with the correct beespace between the top bars, the rebated side bars and the wide bottom bars (National Bee Supplies if I remember correctly). Bob’s talk was the only beekeeping talk I’ve heard with psychedelic imagery and a guitar riff. Bob also demonstrated his enviable woodworking skills with an elegant little (mating nuc sized) observation hive. Jochen Plugfelder gave two fascinating presentations on improved formulations of formic acid for Varroa treatment and the chemistry of queen fighting, the latter supported by excellent video. Ben Jones discussed his studies on dietary influences on foragers and – in a commendably dedicated way – rushed off early to complete a time course experiment. Finally (although it was actually the first talk of the meeting in place of Alison Haughton) Robert Pickard presented a wide ranging overview of social and solitary bees and their mimics. The talk was actually so wide ranging that it was difficult to categorise it and was illustrated with a range of interesting slides.

I’m looking forward to speaking at Birmingham and District Beekeepers Association on Friday 31st October. My talk is titled “Dr. Bodgit goes beekeeping: make the stuff you can’t buy … that works better … with as little blood loss as possible“. It’s a gentle introduction to building some of your own equipment, saving a few bob and making things that work better than the equipment you can buy from the major suppliers. Aside from the financial benefits (e.g. DIY insulated crownboard for about £8, Thorne’s uninsulated polycarbonate quilt for nearly £20) there’s a lot of satisfaction to be gained from building your own equipment. Almost no specialised tools are required and certainly almost no power tools … all helping avoid blood loss. 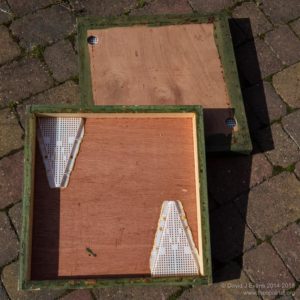 Update … Thanks to BDBKA for their hospitality on Friday evening. Considering the wealth of experience in the room I was pleased there were a few things that were new to them in the talk. I hope to hear of their success with Kewl floors and foundationless frames when I next visit. 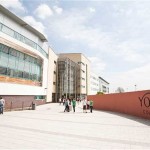 I’m delighted to be talking  – twice (!) – at the Yorkshire Beekeepers Association Spring Conference in York on Saturday. With Stephen Martin (bee recognition and the Asian hornet), Jay Evans (beenomics – is that a real word?), Ben Jones (nutrition) and Liz Collison (neonicotinoids) also on the programme it promises to be an enjoyable day.

Update – it was a very enjoyable meeting and I’d like to thank the YBKA, Roger Chappel and Michael Badger for their excellent hospitality. My talk on queenright queen rearing using the Ben Harden system was well attended and generated some interesting questions. Abelo had a small trade stand selling all sorts of ‘essentials’ including some competitively priced radial extractors.

The move to Harper Adams College has improved the facilities available to people attending the BBKA Spring Convention – there’s more space for the trade exhibits and much better quality lecture theatres for those both speaking or listening in the educational talks.

However, speaking to some of the people running the trade stands (on the Friday, which was the only day I attended in 2014), the impact of BeeTradEx is perhaps beginning to have an effect. There appeared to be empty spaces in the trade tents – though this might have been for exhibitors waiting until the Saturday to set up – and discussion of some exhibitors being offered additional space at no extra cost. I suspect UK beekeeping may not be big enough for two large trade shows per year, particularly since they occur within a month or so of each other.

For the first time (in my memory at least) the trade tent was open on the Friday afternoon and into the evening. This was very welcome. Having spent the afternoon in the Insect Pollinators Initiative presentations I rushed around, stocking up on the essentials I needed. I had a quick look at Thorne’s new poly nucs which appeared to be pretty good quality (and, because they’re smooth on the outside, easy to paint) and their one handed queen catcher, which was disappointingly cumbersome.

As always, everyone was very friendly and it was a great opportunity to catch up with old, and make new, friends. I just hope that the introduction of BeeTradEx doesn’t damage the BBKA meeting … without the bustling trade stands I’m not sure how much of a draw the convention would be. 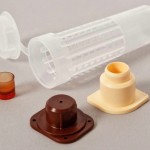 On Friday 31st. of January I presented a talk at Birmingham and District Beekeeping Association on Queen rearing for beginners. After a bit of rushing around to procure a projector and cable to allow my Mac laptop to work we had an enjoyable evening and I’d like to thank them for their hospitality. It was good to talk about something for warm sunny summer days on such a filthy wet evening.