The swarm season this year has been atypical. At least here in the coolish, dampish, East coast of Scotland.

I hived my first swarm of the year on the last day of April and – as I write this – my most recent one in the middle of July.

The intervening period has been pretty quiet as the weather in May and June was – after a warm early spring – rather poor 1. The weather picked up a week or so ago, but it’s not been consistently good.

What we have had recently are some very warm and sunny days. The combination of some iffy weather, a bit of nectar coming in and then a few hot days are great conditions to trigger swarming.

For this reason I keep bait hives in my apiaries and one in my back garden throughout the season. These consist of a brood box with a solid floor, one old black frame anointed with lemongrass oil on the top bar, ten foundationless frames, a plastic crownboard and a roof of some sort. 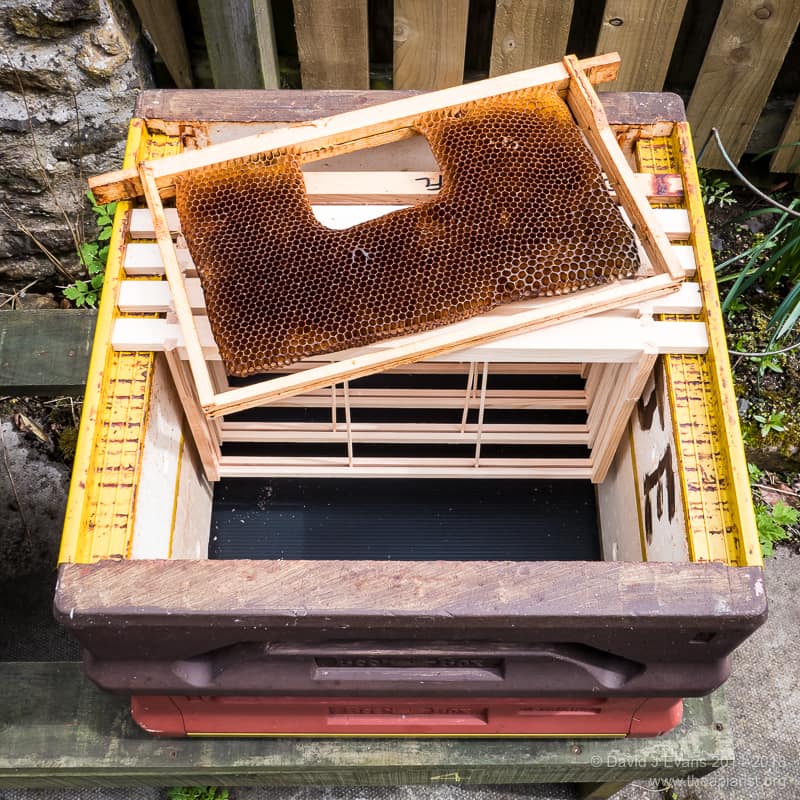 Any interest in these by scout bees suggests that there’s a colony nearby thinking of swarming. Scouts clearly check out potential locations before the colony swarms, but the scout activity increases significantly if they find your offering attractive and once the colony swarms and sets up a temporary bivouac from which it subsequently relocates.

Watching scout bee numbers increase allows you to guesstimate when a swarm might arrive. It’s an inexact science. A few scout bees are nothing to get excited about. Dozens are good and a hundred or two are very promising.

However, what’s best of all are a hundred or so scouts that rather suddenly disappear leaving the bait hive suspiciously quiet.

Which is more or less what happened on Sunday at the bait hive in my garden.

Scout bees had discovered the bait hive sometime on Friday (or at least, this was when I first noticed them).

The weekend started warm with thunder threatened. I finished my colony inspections and returned for lunch to find a couple of dozen scouts checking out the bait hive 2. As the cloudy and muggy conditions continued scout bee numbers increased during the afternoon and then eventually tailed off as the evening cooled.

Sunday dawned warm and bright. Scouts were up and about before I’d made my first mug of coffee at 7 am. Numbers increased significantly during the morning.

While taking a few photos for talks I noticed a handful of corpses and walking wounded bees crawling around on the ground by the bait hive.

On closer inspection it was clear that there were intermittent fights between scouts at the hive entrance. There were more fights than cripples or corpses, and most fights ended with the scrapping bees breaking apart and continuing to, er, scout out the suitability of the bait hive.

Scout bees fighting from The Apiarist on Vimeo.

This behaviour seemed a bit unusual, but there wasn’t an obvious explanation for it. I wondered if I’d inadvertently used a frame with some stores tucked away in the top corners, with the fighting being between scouts and robbers perhaps 3.

Gone but not forgotten

The calm before the storm

By Sunday lunchtime I was confidently predicting a swarm would be arriving ‘shortly’.

This prediction was upgraded to ‘very shortly’ once I realised – around 3 pm – that the scout bee activity had suddenly dwindled to just a few.

This happens when the scouts assemble en masse and persuade the bivouacked swarm to take flight and relocate. Honeybee Democracy by Thomas Seeley has a full explanation of this fascinating behaviour.

And, sure enough, ten minutes later a swirling maelstrom of bees approached purposefully down the street at chimney height, spiralling down to the bait hive.

You hear it first. Is it? Isn’t it? You look up and around. You can’t place the direction the noise is coming from. Then, at walking pace, they appear.

Hundreds, then thousands, milling around, getting lower, festooning the hive front, landing all around, taking flight and settling again.

At the hive entrance are hundreds of bees fanning frantically. The queen must have already entered the box. Slowly, over an hour or so, the bees settle, enter the box and just leave a few stragglers around the entrance.

One hour later from The Apiarist on Vimeo.

Swarms are a fantastic sight in their own right. They’re even better when you have some insights into how ten thousand individuals with a brain the size of a pin head are corralled and coordinated to rehouse the queen, the flying workers and a few dozen drones that are ‘along for the ride’.

The evening slowly cools. I can’t resist gently hefting the box to guesstimate the size of the swarm. Small to middling perhaps … a view pretty-much confirmed when I peek under the roof to see about 5-6 seams of bees occupying the back of the box.

We have a new puppy and it was clear (i.e. I was told in no uncertain terms) that the occupied bait hive must be moved to a less accessible spot.

I plug the entrance with some tissue and gently carry them around to a puppy-free location on the other side of the house.

Swarms suffer short-term geographic memory loss. They can be moved any distance you want for the first day or two after hiving them. After that they’ll have reorientated to the new location and the standard 3 feet/3 miles rule applies (which isn’t a rule at all).

It was clearly going to be a fabulous day.

One of the great things about being an academic is the flexibility you have once the students have disappeared to Ibiza or Machu Picchu or wherever for the summer 4.

I was therefore looking forward to a day of wall-to-wall meetings, at least 3 hours of which would be in a basement room with no windows 🙁

At 7:30 am I checked the relocated and occupied bait hive. All good. Almost no entrance activity but a contented gentle buzzing from inside suggested that all was well.

As I left the house I noticed a dozen or so bees milling around the stand where the bait hive had originally been located.

I quickly dumped a floor, a brood box with half a dozen frames and a roof on the stand in the hope that any stragglers from the swarm – which I suspected were scouts that had got lost, or workers that had already reorientated to the occupied bait hive late the previous afternoon – would settle (or clear off).

Having been trapped underground in an overrunning meeting on the hottest day of the year I missed the following messages that all appeared in a rush when my phone reconnected on surfacing.

13:27 Even more bees. I thought you’d moved them last night?

As I blinked myopically in the bright sunlight, like a lost mole, I realised what I’d seen yesterday were scouts from two separate colonies fighting at the bait hive entrance.

The bees I’d seen the following morning had been scouts from the second swarm. 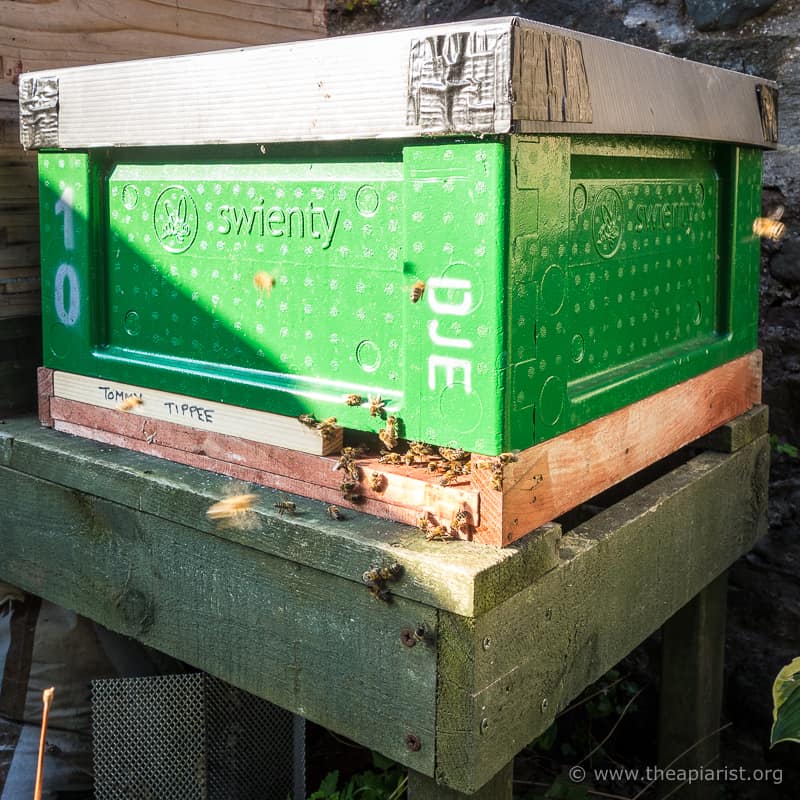 Another day, another bait hive, another swarm …

Which had now arrived.

As a beekeeper I’m well aware that a puppy-protecting non-beekeeper telling me about Lots of bees and Even more bees probably means Some bees.

The term ‘hundreds’ might mean any number less than 100.

It’s worth noting here that the partner of a non-beekeeper is considerably more accurate than the general public. If I get a message from someone with no experience of beekeeping about ‘hundreds of honey bees. Definitely honey bees!’ I know what they’re actually talking about are 12-15 solitary bees … probably Osmia.

HUGE is tricky though. It has a sort of indefinable unmeasurable quality of largeness about it.

Thousands would have been easy … a small cast perhaps?

I had to open the box to add a full complement of frames. The poly hive was heavy. You could feel the swaying mass of bees hanging from the wooden crownboard over the empty space in the box 5. The few frames present were completely covered.

I bumped the bees off the crownboard, lifted it away and the bees formed a very deep layer at the bottom of the brood box 6. The new foundationless frames I added projected well above the frame runners supported by the writhing mass of bees and only gently settled into place as the bees moved out of the way and up the sidewalls.

I strapped the box up and moved it to a puppy-safe location.

The following evening I treated both swarms with a vaporised oxalic acid-containing miticide and the morning after that I shifted them to an out apiary.

Only last week I discussed the importance of learning from observation.

Here was another lesson.

What did I learn from these two swarms and what assumptions can I make? 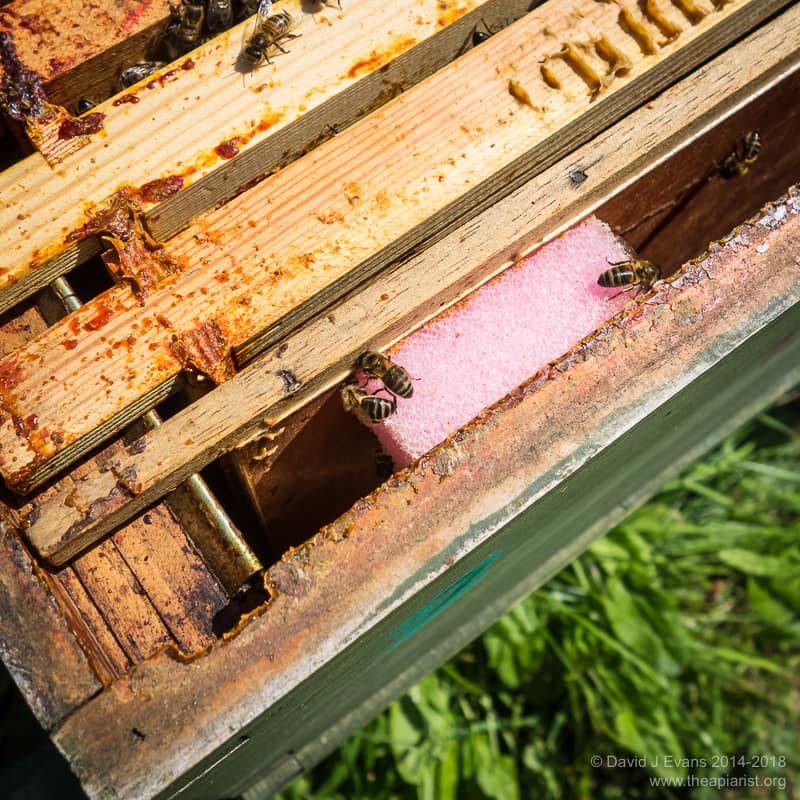 The whole purpose of putting out bait hives is to attract swarms. As a beekeeper this saves me collecting them from the neighbourhood or – more frequently – politely refusing to collect them from 40′ up a Leylandii, a chimney or the church tower 9.

If something is worth doing you might as well do it properly. The optimal design for a bait hive is well understood (essentially it’s a National hive brood box – Honeybee Democracy again!), so that’s what I offer. Not a nuc 10.

However, to have two swarms essentially fighting for access to a single bait hive suggests there is a shortage of good natural or man-made cavities to which a swarm could relocate.

I live in a small village surrounded by mainly arable farmland. There are lots of hedges, small spinneys, conifer plantations, old farm buildings and houses about 11.

Rather too much arable if you ask me …

I’ve got a fair idea where bees are kept locally. I don’t think there are any within a mile of the bait hive other than my own colonies (and they did not swarm).

I would have expected there to be several suitable local natural or man made cavities that could ‘compete’ with a bait hive to attract swarms.

Clearly not … or they are already all occupied 12.

STOP PRESS Both were prime swarms as they had laying queens when I checked them on Thursday afternoon. I should have also added that a bait hive in the same location attracted another swarm in the preceding week. It’s been a successful spot every year I’ve been back in Scotland.

Buy one, get one free (BOGOF) seemed an appropriate title for this post. It dates back to 1985 where it was first used in the journal Progressive Grocer (who knew there was such a thing?). Two for the price of one offers have been blamed for spiralling obesity problems and there has been political pressure to ban such offers in supermarkets.

In draft form this post was entitled twofer. As in two for the price of one. Etymologically this is an older term, but surprisingly the OED does not associate it with cricket.

Twofer is regularly used by cricket pundits to mean two wickets in successive balls. However, I decided to avoid the cricket link so as to not upset any of my valued New Zealand readers who might still be smarting from the double-whammy of a cricket World Cup defeat to England and losing the claim to have the World’s steepest street to Wales.