So … you’ve just completed a Beekeeping for beginners course with a local association over the winter. You’ve built your flat-packed hive, you’ve bludgeoned the ends of your fingers building frames and you’ve bought a quality beesuit from one of the suppliers at the Spring Convention. Not necessarily in that order. You’re now ready to start keeping bees.

In reality … probably not.

Beekeeping is essentially a practical occupation. The theory is important, but nothing like as important as the observation, the interpretation and the implementation of the practical aspects of the pastime. These practical aspects cannot be learned on a cold winter evening watching two dozen Powerpoint slides with a break for a cuppa and a chocolate digestive. They also can’t be acquired from a book (or a website … but don’t go yet). Instead, they’re acquired by accumulated hours spent bent over a hive – or better – hives, coupled with good record keeping and observation of what happens next. You can achieve this alone, but it can be a dispiriting process as “learning from your mistakes” can involve the loss of the honey crop for that year, or even the loss of the colony. 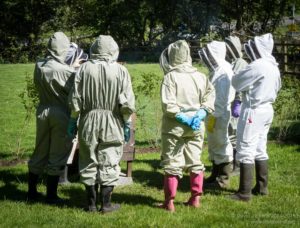 Most beekeepers involved in training know this, and local associations generally appreciate that their winter courses only really lay the groundwork for the practical skills to be acquired during the following season(s). To help achieve this many offer sessions in the association apiary, where experienced beekeepers inspect colonies with small groups of beginners. More important still is the mentoring many offer – the appointment of a more experienced beekeeper to a beginner so that the latter has, at a minimum, a contact for help and support as the season progresses.

‘Mentoring’ covers a range of levels of interaction, but it’s rarely defined what’s expected of mentors, either by the association or the beginner. I’m sure there are examples of good and bad practice out there. I think it could be argued that better mentoring might significantly increase the success rates of new beekeepers … where ‘success rate’ is measured as the proportion of people who take a beginners course that are still keeping bees three years later, or the proportion of colonies managed by beginners that are overwintered successfully. I’d even suggest that better mentoring is more important than the winter theory course, but these are an important source of income for beekeeping associations and do provide the necessary background information.

The first year is critical

Beginners desperate to start beekeeping might buy an imported nuc in early Spring, watch in awe – and perhaps apprehensively – as it develops at breakneck speed during May, lose half the bees as it swarms in June, struggle to get it requeened in an unseasonably wet and cold July, spend August trying to prevent it being robbed out and then lose it in the winter due to poorly timed Varroa treatment or insufficient feeding. Twelve months on they’re back to square one, on the waiting list for another nuc and trying to work out why everything went wrong the first time round. There are better ways to start. 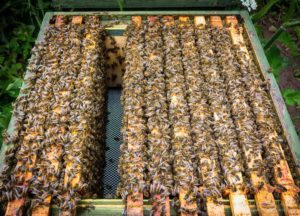 Of course, you might be lucky, the weather might be kind, the bees unswarmy and the honey crop weighty. The sort of ‘perfect storm’ of a season described in the paragraph above is unusual, but certainly not unheard of. Large numbers of beginners start beekeeping each year, a proportion decide it’s not for them and never acquire bees, others start and relatively quickly – perhaps within 1 to 3 years – give up, and a few become lifelong beekeepers. Of the middle group, some stop because they decide it’s not a hobby they want to pursue (which is fine, it’s certainly not for everyone). However, others abandon it because they struggle to acquire the practical skills and experience that make beekeeping both relatively easy and very enjoyable. After the first or second or third bad season, after struggling with swarms, unmated and invisible queens, Varroa and disease, bad tempered bees and other problems, they abandon any hope of being a successful beekeeper … and abandon their bees.

It’s this last group – those that abandon something they wanted to do and have trained for because of the problems that they encounter – that this post is really about. Are there ways more people that want to become beekeepers can become successful beekeepers? Are there ways to get beginners faster from the winter theory classes to a good enough level of competence? Are there ways to reduce the high levels of losses that many new beekeepers experience in their first year or two? Might better mentoring improve the success of beginners in their first year(s)?

I have no doubt that the best way to learn beekeeping is to watch someone more experienced at work. Observation, combined with a willingness to ask questions and an ability to listen to the answers (I’m assuming the more experienced beekeeper has a willingness to provide the answers), provides a quick and relatively painless way to acquire the practical knowledge necessary. Note that the ‘more experienced beekeeper’ doesn’t have to be an expert … in fact, it might be better if they aren’t. Perhaps the ideal would be someone with at least two or three successful seasons behind them, able to provide a pragmatic mix of enthusiasm, reality and advice, but before they become totally set in their ways, inflexible and – whisper it – out of date. Not that there’s anyone like this in your local association 😉

Although many beekeeping associations offer ‘mentoring’ for new beekeepers, the ‘mentoring’ is often poorly defined. What does your association offer? It might be anything from season-long one-to-one support and advice, in person, to a mobile phone number and instructions to “call here if you need help”. Frankly, the latter is probably not a whole lot of use. Firstly, it’s often difficult to describe what’s happening in the hive particularly when you’ve not seen it before and when you’ve relatively little experience of what should be happening in the hive. Secondly, you can be sure that when help is needed the mentor will be at the end of a dodgy mobile phone signal in their out apiary. Typically this is the late May inspection when the new beekeeper has carefully destroyed all those pesky queen cells only to realise, far too late, that there’s no queen in the colony (they’ve swarmed) … and now no larvae young enough to raise as new queens. 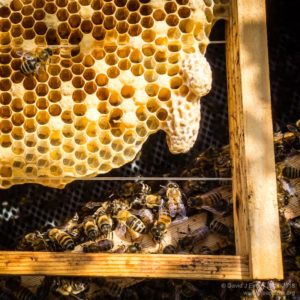 I think there are ways to combine improved practical training, the desire of new beekeepers to start inspecting bees early in the season and to reduce the demand for imported nucleus colonies (something I’ve already touched on in Supply and demand). Imagine a scenario in which the beginner acquires a mentor before the practical beekeeping season starts and the mentor provides some practical advice on the equipment required. Since the plan I’m outlining involves the beginner acquiring his/her nucleus colony from the mentor mid-season (once their practical skills are improved), equipment compatibility will be important.

Once inspections start the beginner visits the mentors’ apiary and attends the standard weekly inspections. Initially this might be just as an observer. Colonies are small, just starting the spring build up. As the mentor has a reasonable amount of experience it’s likely there’s more than one colony in the apiary. Therefore the beginner gets to see the importance of being able to compare colony development, and gains through the simple repetition of the practicalities of inspections. In later visits the beginner should – under supervision – go through a colony. Together – though largely taking a lead from the mentor – they select a suitable colony that is building up fast and that will require ‘cooling off’ (by splitting off a nuc) to delay swarming. Alternatively, some sort of vertical split or artificial swarm is conducted, with the part of the colony that generates a new queen being destined as the beginners first colony. By whatever route – even making up a new nuc from one or more colonies and adding in a queen cell – the beginner acquires their first colony. 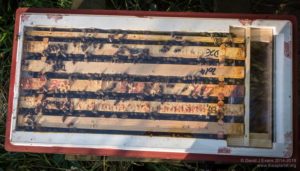 By this time the danger of swarming has largely passed, the beginner has acquired a significant amount of practical ‘bee handling’ experience. The mentor has provided – and, if necessary, been paid for (I’ll return to this point in a later post as this is quite long enough already) – the nucleus colony. A decision will have to be made as to whether to move the nuc to the beginners own apiary. It might be best to delay this until it’s clear that the nuc is building up well, perhaps waiting until it is moved into a full hive. At the same time, the beginner will have observed his/her mentor dealing with many of the other types of ‘events’ that occur every season … queenlessness, aggressive colonies, adding supers, uniting, swarm control, swarm collection, bait hives and possibly even queen rearing or other more advanced activities.

The final activities of the season are the critical stages in winter preparation – Varroa treatment and feeding – at the very least the beginner and the mentor will have had ample opportunity to discuss this in detail. Certainly the usual seasonal IPM activities and monitoring of mite levels will be familiar to the beginner. Ideally the mentor will be involved with preparations for the winter at a practical level as these are important in successfully getting the colony through to the following Spring.

As described, this is more of an apprenticeship than mentoring … it’s a heck of a lot more than “call this number if there are problems” 😉

Benefits for all involved

I’ve been a mentor and involved in training. I’ve also been mentored. I’ve enjoyed, and still enjoy, learning from others. I think the scenario outlined above offers benefits for both the mentor and mentee:

I’m going to deal with this subject in more detail at a later date. Suffice to say that there is a shortfall in homegrown nuc production for sale to the large numbers of beginner beekeepers each year. In Scotland we know that this shortfall is about 20% (it was surveyed in winter 2015). Going by the number of nucs imported for resale (some even as ‘local bees’ – it’s time some of those involved in this were ‘named and shamed’), or queens imported to drop into made up nucs for early season sales, the shortfall in the UK is probably several thousand colonies. One way in which this might be addressed is to encourage beginners to acquire their nucs from their mentor in mid-season, rather than buying something in mid-April. This post is already too long so I’ll return to this in the future … but the bottom line will be overwinter more nucs and encourage beginners to acquire bees in mid-season, not in April.

Here in the east of Scotland the season is just properly starting … my spare time will soon be taken up with practical beekeeping rather than writing about it, so posts might get less regular, less frequent, less illustrated or less long. They probably couldn’t use less good written English. However, next week’s is already written and will automagically appear at the end of the month.