All good things must come to an end, though this particular one did sooner than I’d hoped.

Our research apiary – affectionately known as The Bee Shed – lies in the path of a recently announced new road development. Not close to, not within sight of, but actually underneath a proposed access road to the new Madras College site to the West of St. Andrews.

There are actually two preferred access road routes to the new school, but the Council (who in their infinite wisdom drag everything out to the last possible minute before committing) won’t decide which will be used until about a month or so before development is expected to start. This is intended to be early in 2018 i.e. rather too close for comfort if we don’t want our research interrupted.

We’ve known about the possibility of the new road since June, but things never seem to move as fast if there’s not a deadline looming.

We therefore need to prepare a second research apiary, move all the bees across and then disassemble the original one … all within the next few weeks.

… is seldom wasted†. And we’ve spent quite a lot of time. We’ve considered a number of alternative sites, some better than others, but none truly ideal.

Given the choice we’d have selected a sheltered, East/South facing site, surrounded by mature open woodland, with water close by, protected from strong winds by the adjacent woodland or walling, with abundant local wildlife, early pollen and …

That’s a description of the current site.

In fairness, there were some issues with the original apiary location. It was low lying and prone to minor flooding. Access was across a rickety set of scaffolding planks that threatened to pitch us into the burn when wet and slippery. Crossing the burn with the hivebarrow – particularly in the dark – required some courage (or stupidity). There was no power in the shed, it was quite remote and it was a bit on the small side.

There were some wonderful orchids though … 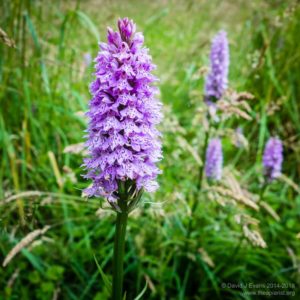 We’ve had to compromise on the new location, but – in doing so – we’ve managed to correct some of the shortfalls of the original site.

We’ll now have much more space and better drainage. We’ve achieved the former simply by specifying a larger footprint, and the latter by building on an earth mound raised a few feet above the water table. We’ve invested in solar powered lighting systems and have excellent shelter from the cold Easterlies that sweep in off the North Sea.

It’s also better located for outreach activities and closer to the research labs.

The final plans include a 15m x 15m platform to house a new bee shed of 16′ x 8′. Once we’ve vacated the original shed (a tiddly 12′ x 8′) it will also be moved to the new apiary, giving us additional storage and colony space.

In total we should have capacity for about a dozen colonies under cover, with more outside if needed. I should have added earlier … the two primary goals of housing bees within a shed is to  provide greater protection, enabling both a slightly longer brood rearing season and allowing inspections and brood harvesting whatever the weather.

If we absolutely have to inspect/sample on a Monday morning during a downpour, we can. The beekeeper saunters over under an umbrella, dons his/her bee suit and does the work. The bees don’t react badly to inspections in inclement weather. They simply exit the shed via the windows and re-enter the hive by a short tunnel through the shed wall. 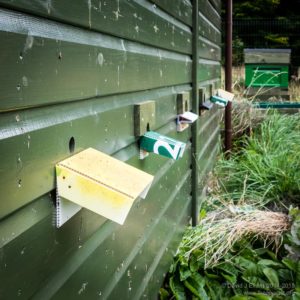 Over the next few weeks I’ll document some of the developments as we start to prepare for the 2018 season.

Here’s what I prepared earlier

Here are a couple of photos of the apiary in the very early stages of preparation.

Dig and Dug build an apiary

The compacted grit base and shed foundations are now complete, with the shed and the fencing due shortly … and then it’s my turn to have a dabble preparing the shed for the bees, installing the windows and entrances and the solar power lighting system.

Early/mid December foundations and base installed

More of the same.

† This quote (Time spent in reconnaissance is seldom wasted) is sometimes attributed to the talented and successful German Field Marshal of World War Two, Erwin Rommel. However, there are numerous other proposed sources … Sir MacPherson (Mac) Robertson (1860 – 1945), Field Marshal Arthur Wellesley The 1st Duke of Wellington (1769 – 1852) or Sun Tzu (544 BC – 496 BC) in The Art of War. Take your pick. The meaning is self-evident … when planning something it’s worth considering all the possibilities, in particular the environment.