Beekeepers in Scotland (and possibly elsewhere) should be aware that the continuing cold weather will mean that strong colonies may have dangerously low levels of stores. Brood rearing has started in earnest by now and the increased number of larvae mean that stores are depleted at a very much higher rate than a week or two ago. For exactly the same reason, colonies in which the queen fails in the winter or early Spring (see the post in a few days) can often be identified by significant levels of uneaten fondant or stores, even before you open the colony and properly inspect them.

I checked two colonies in the bee shed this morning. One is very strong; they’re already at 8+ frames of brood and even managed to store a little nectar in the super during two warm days last week. There are drones already present and more sealed drone cells on the way. There are even a couple of ‘play cups’ in evidence, but no charged queen cells. 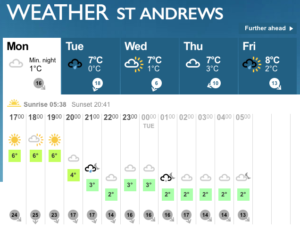 However, the most important thing that wasn’t present was stores. With the low temperatures predicted to continue for at least the next fortnight there’s a real danger of the colonies starving. I replaced one of the outside frames with a full frame of sealed stores to tide them over for a bit (alternatively I could have added a block of fondant or some thin syrup, but I keep frames of sealed stores for just this type of eventuality). When I next check them I’ll almost certainly give them a second brood box with some drawn comb and a couple more frames of stores. That way the colony can continue to expand without starving and I can use the extra brood to make up nucs for queen mating once the weather improves.

The National Bee Unit have also recently released a warning about the April double-whammy of low food levels and high mite levels … this includes the sentence “Some of you may not have gotten round to treating your colonies with oxalic acid as the weather was so mild in winter“.

Anyway, their advice usefully includes ways to control high mite levels at this time of year. This includes Apistan and Amitraz-containing compounds (though resistance to the former is widespread) whereas treatments that are temperature-dependent for efficacy, such as Apiguard and MAQS, should be avoided. Alternatively, three treatments with vaporised oxalic acid would be effective. 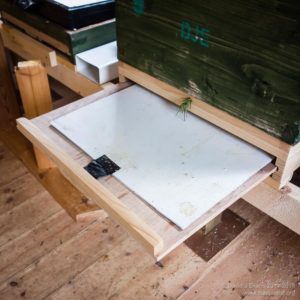 The mite levels in the colonies in the bee shed are very closely monitored using Varroa trays in sealed floor units (so none blow away or get dragged off and eaten by creepy-crawlies – mite drop numbers are notoriously poor at giving a proper measure of mite infestation levels). Since the 23rd of February – 62 days ago – the two colonies in the shed have dropped 3 mites each in total. These colonies only received vaporised oxalic acid treatment last season – as early as possible after the honey supers were removed and in midwinter.

Frank Loesser wrote Baby, it’s cold outside in 1944 and it was performed by Esther Williams and Ricardo Montalbán in the 1949 film Neptune’s daughter – see the clip from the original film at the top of the page.