Over the last fortnight, despite some occasional warm and sunny days, the autumn has made its presence known. 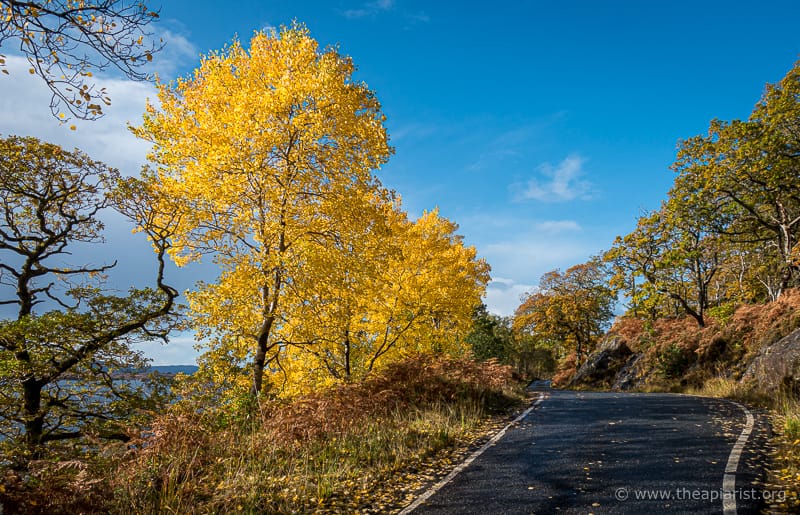 The aspen down the road are a stunning colour at this time of the year. Although I’ve planted a couple of dozen, they’re still not more than thigh-high and it will be quite a few years until they can match the display shown above.

Almost overnight hundreds of redwing have arrived from Scandinavia and many of the rowan have already been stripped bare 1.

In Fife, the leaden skies are filled with skeins of geese forming raggedy V’s as they fly in from the North Sea. It’s an evocative sight … it reminds me of my first weeks as an undergraduate student at Dundee University half a lifetime ago

And it also emphasises that the beekeeping season is over.

Of course, there will be jobs to do in the winter, but the bees are pretty much on their own for at least the next five months.

The final essential task of the season for me is to remove the Apivar strips that went into the hives in August. Initially the strips were placed on either side of the – still large – brood nest. A few weeks ago I removed the strips, scraped them free of propolis and wax and re-inserted them around the, now shrunken, brood nest. 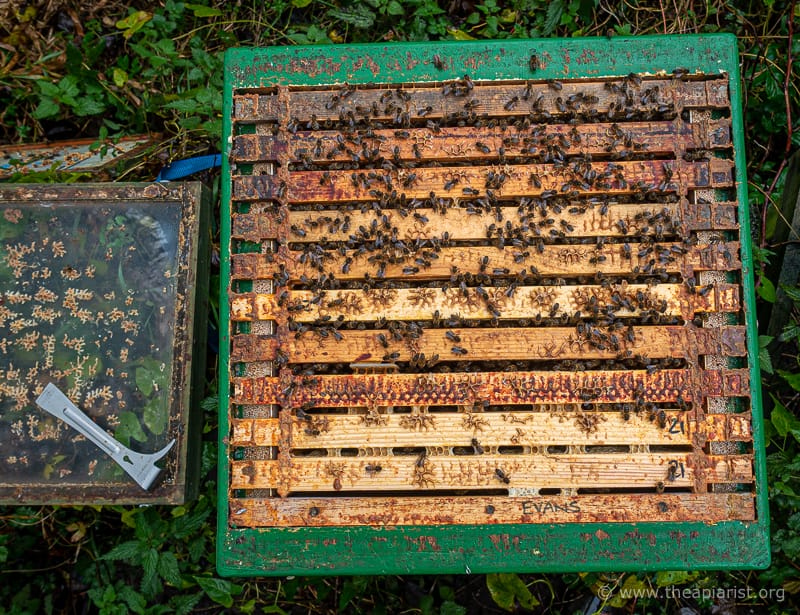 Mid-autumn and time for the Apivar strips to be removed

You can just about see them in the photo above, flanking the four central frames.

It is important to remove the strips. Although Apivar has a relatively short half-life, some residual activity will remain. If you leave them in the hive any surviving Varroa – and there will be survivors 2 – will continue to reproduce in the presence of trace levels of amitraz, the active ingredient in Apivar.

With reduced – and possibly borderline for killing – levels of amitraz present, these are ideal conditions in which resistance may develop. Although this has been reported it does not appear to be widespread.

Therefore, to ensure that Apivar remains an effective miticide it is important to remove any remaining strips before the winter.

Your next adventure in Glenrothes awaits!

That’s the subject line on the emails I receive from Travelodge where I stay when I’m doing my beekeeping in Fife.

Have you ever been to Glenrothes?

‘Adventure’ isn’t the word most people associate with Glenrothes.

This is a town where every third car being driven late at night has a raucous exhaust, lowered shocks, tinted windows and a spoiler. The drive-in queue for McDonald’s sounds like the pit lane at the Indianapolis 500 and there are more donuts in the car park than in the fast food outlets 3.

But none of that usually bothers me as, by the time I get to the hotel, I’ll have been driving for 5 hours and will have spent about the same amount of time inspecting colonies or lifting cleared supers. I may also have squeezed in a couple of hours of meetings at work.

The environment might be noisy, but the beds are comfortable.

But visits in late autumn are a bit different.

No colonies to inspect, no grafting to do, no nucs to check for mated queens and no supers to remove.

All I need to do is gently lift a few crownboards and pull out the Apivar strips now that treatment is complete.

So, what do I do for the rest of the day?

Is that an oxymoron?

I book my trips to Fife to fit in with what the bees need. To make the hotel affordable I book many weeks in advance.

I therefore put up with whatever the weather throws at me. Usually it works out OK.

Furthermore, as regular reader know, several hives are in a bee shed, so the weather is largely irrelevant.

And Monday was really wet.

Having driven for four hours through increasingly heavy rain – stopping en route to make a honey delivery – I fortified myself with a cappuccino and excellent almond croissant from Taste, the best coffee shop in St Andrews 4.

I then sat in the shed enjoying my late breakfast listening to the rain hammering on the roof.

I needed something to occupy me until either:

And the obvious thing to do was a bit of autumn cleaning.

During the season the bee shed is used on a daily or weekly basis depending upon the experiments underway. In addition, we have a storage shed on the same site and a number of additional hives in the same apiary. I also do most of my queen rearing in this apiary (the bee shed provides a near-perfect environment for grafting), distributing the nucs to other apiaries for mating.

And all that beekeeping tends to leave a bit of a mess. At least, it does where I’m involved.

For the last couple of years I’ve not bothered returning the extracted supers to the hives for the bees to recover the last of the honey.

Instead I’ve just stacked them ‘wet’ in the shed, protected from wasps, mice and robbing bees, by covering the top of the stack with a well-fitting roof.

Or a snug-fitting crownboard and a badly fitting roof. 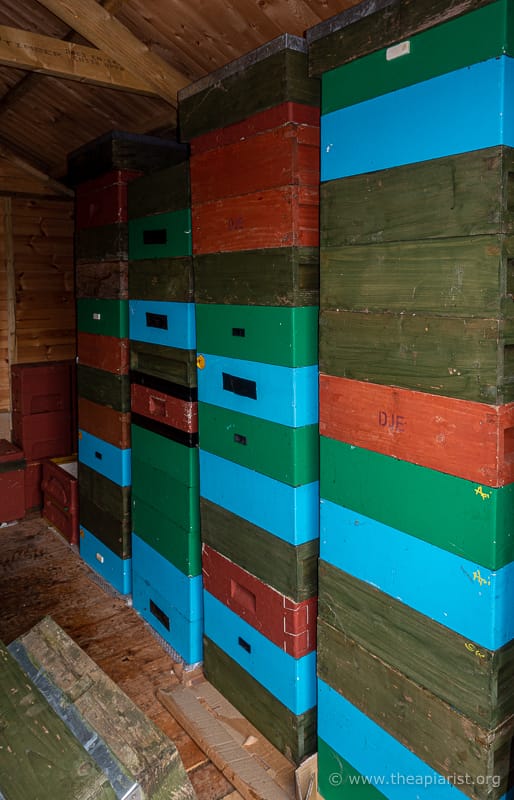 Experience has taught me that the floor of the shed isn’t level and/or has gaps between the planking. Rather than seal all these gaps I simply stand the stack of boxes on the sort of closed cell foam sheeting used for packing furniture, or – when I run out – on double thicknesses of cardboard 5. This stops the wasps, ants and bees from getting access.

So I started by tidying the stacks of supers. Inevitably this necessitated moving them first, sweeping the floor clean, laying out the foam/cardboard and then restacking them. There’s not enough space in the shed to move ~60 supers so they went out in the rain.

Once they were back I could turn my attention to the other side of the storage shed which houses spare roofs, nuc feeders, floors, boards (split, crown, surf, Morris, Snelgrove etc. 6 ), a breeding colony of queen excluders 7 and a motley collection of other items that:

Sorting this lot out took another hour or two, and involved a further soaking as I needed to clear the space before I could refill the space.

Early on in the process … 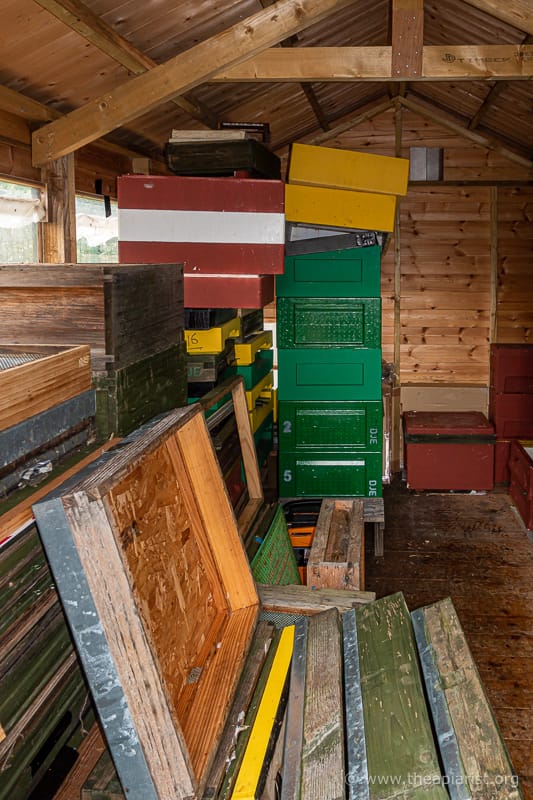 Is beekeeping the largest volume hobby?

… and when at least partial order had been restored … 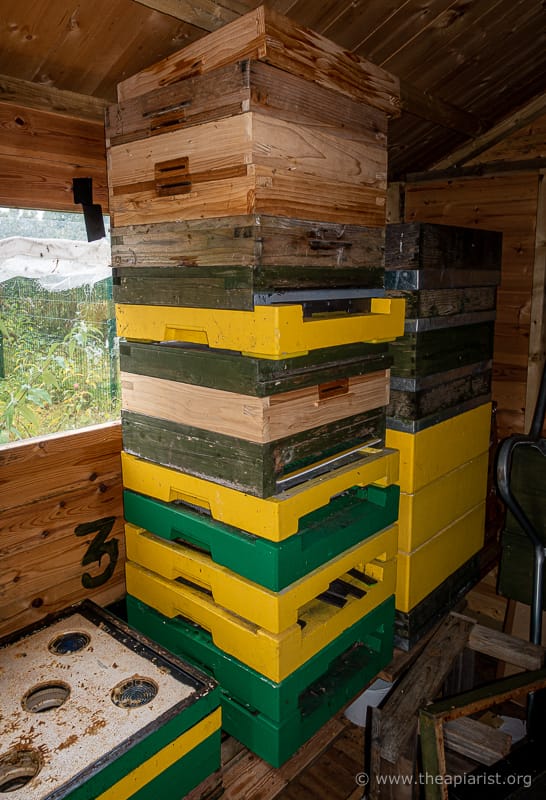 Floors from Abelo, Pete Little and some homemade abominations 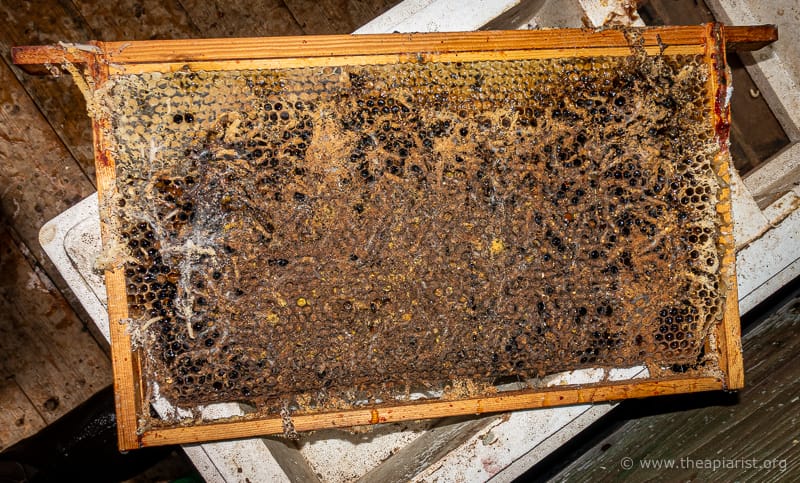 Wax moth are something I’ve largely avoided or ignored for most of the last decade. The cold winters in Scotland seem to keep their numbers down.

All of the infested frames were bagged up for burning at the earliest opportunity. The remaining brood frames were treated with DiPel DF, a suspension of Bacillus thuringiensis kustaki spores and toxins. If ingested by the larvae of wax moths, the δ-endotoxin component dissolves in the alkaline environment of the gut, is activated following cleavage by gut proteases and then ‘punches’ a hole through the gut wall.

And the spores germinate, allowing the bacteria to grow inside the larva.

As I wrote in a post several years ago about this treatment:

DiPel DF is non-toxic for bees. 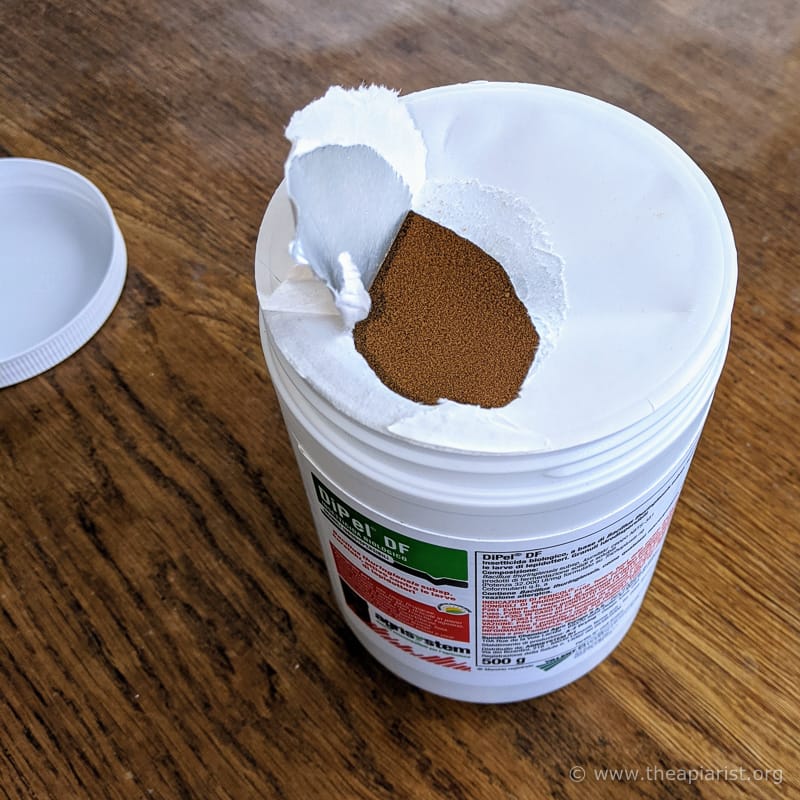 I’ve not had problems with wax moth infesting supers stored ‘wet’ … they’re after the old cocoons and other rubbish that accumulates in brood frames.

Vita used to sell a product called B401 – also a suspension of Bacillus thuringiensis spores and proteins – which was withdrawn from sale in 2019. Despite assurances that a replacement – imaginatively labelled B402 – would be available ‘soon’ it appears to only currently be sold in the US.

Out with the old … and the not fit for purpose

All this organisation meant I discovered things that I’d lost … like a small stack of contact feeders hiding in the corner that had not been used this season as I hadn’t done any shook swarms.

There they are! Contact feeders lurking shyly in the furthest corner (unlike those brazen frame feeders at the front)

I also found some mini-nucs I’d built for queen mating almost 10 years ago. They were made of ply and housed a tri-fold full-size brood frame (you can now buy these, but couldn’t when I built them). 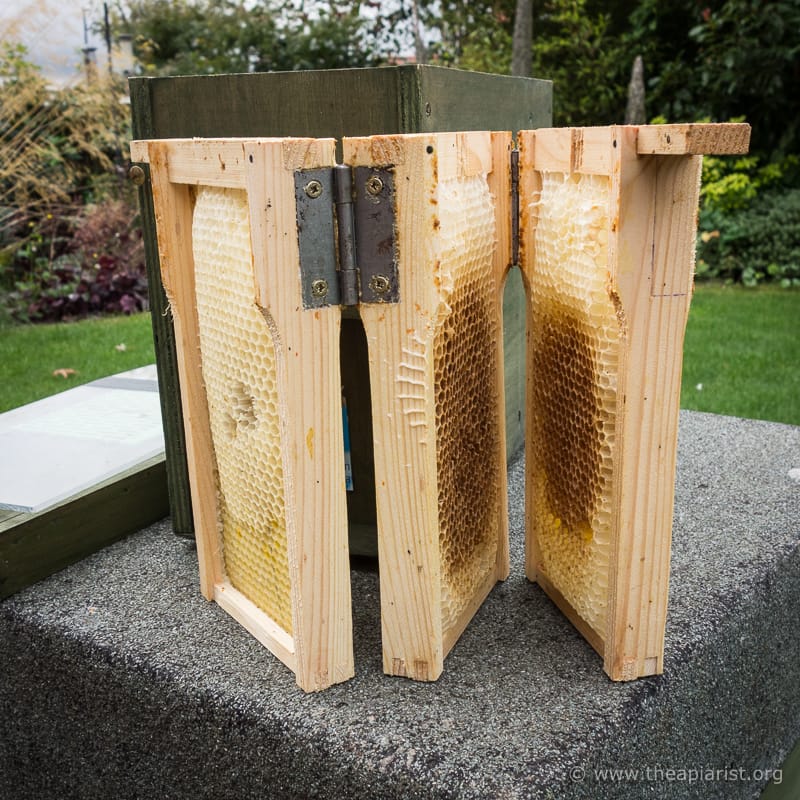 However, the ply was starting to delaminate and it was pretty clear that they wouldn’t survive a Scottish summer season so they were unceremoniously binned.

And I finally bit the bullet and got rid of all my XP Plus queen excluders. These were bought from Thorne’s a few years ago and had been used only when I ran out of everything else.

In principle they are a good idea. A white plastic queen excluder with bee space on the underside provided by a raised rim and a series of small X-shaped spacers that stand on the top bars.

XP Plus queen excluder (the plus must mean ‘plus warp’)

However, in practice, they’re rubbish. They were the ‘ugly’ in my 2017 description of queen excluders that included the phrase ‘the good, the bad and the ugly’.

They warp really badly. The photo above – if anything – obscures the warp because the QE is not being held flat. When you place them under a super the centre bows up and contacts the underside of the super frames.

There’s something rather poignant about the death throes of the beekeeping season. It can end with a bang as autumn storms roll in, or it can end in a protracted stutter as intermittent good days allow the bees to forage late into October.

Of course, it’s au revoir 8 and not a final goodbye.

A Nicot cup and vacated queen cell reminded me what a good queen rearing season we’d had on the east coast. Although the first round of grafting was a near-total failure, successive rounds were excellent, and queen mating was very successful. One of the best seasons in memory 9.

Not all the memories were good ones though. I received one of the dreaded ‘AFB alert’ warnings for the apiary and spent a very long couple of days checking every cell on every brood frame in every colony, and testing any that looked suspicious.

I don’t take sugar, and the coffee stirrer shown above is provided in the AFB LFD kit to lift the dodgy-looking larva into a tube for analysis. Everything looked clear, but it gave me a few very stressful days.

And … after all that tidying, and repeated trips to the industrial-scale bins, it finally stopped raining.

I fired up the smoker and quickly, but gently, removed all the Apivar strips. The crownboards on all the hives were very firmly stuck down with propolis and the bees, although calm, weren’t exactly overjoyed to see me. 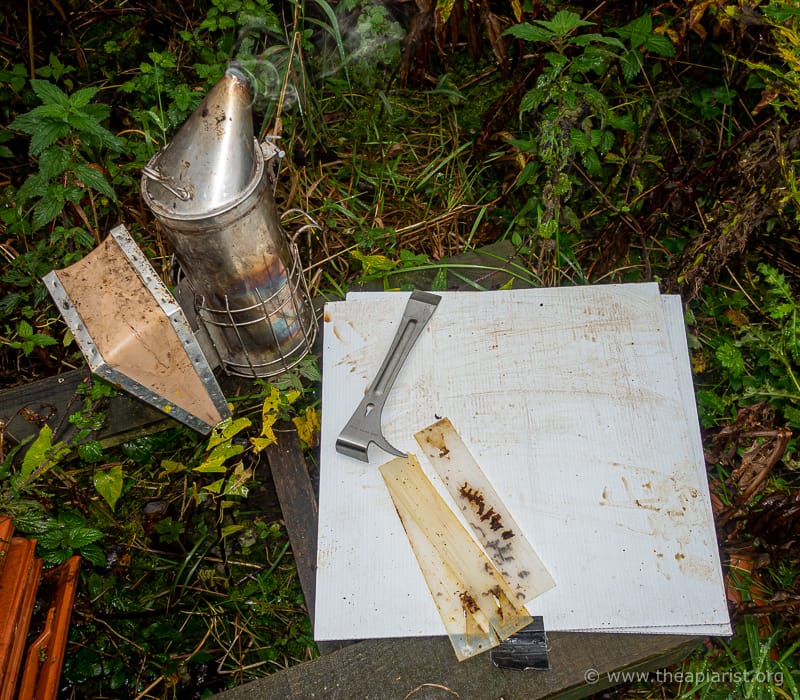 I still had another apiary to visit. With rain threatening there wasn’t time to monitor the level of brood present so I slipped cleaned Varroa trays under the hives. This will allow me to inspect both residual mite drop and look for the presence of the characteristic biscuit-coloured cappings when brood is uncapped.

And then, after about half an hour of practical beekeeping, I set off back to the west coast as the rain started again.

Two days later the Moidart hills had their first dusting of snow.

It’s official, autumn is here and the beekeeping season is over.