I posted last week on the relative lateness of the start of the beekeeping season here in Scotland 1. Having been away for a few days I was both surprised and disconcerted to find this waiting for me when I arrived at the apiary to conduct the first inspections of the year. 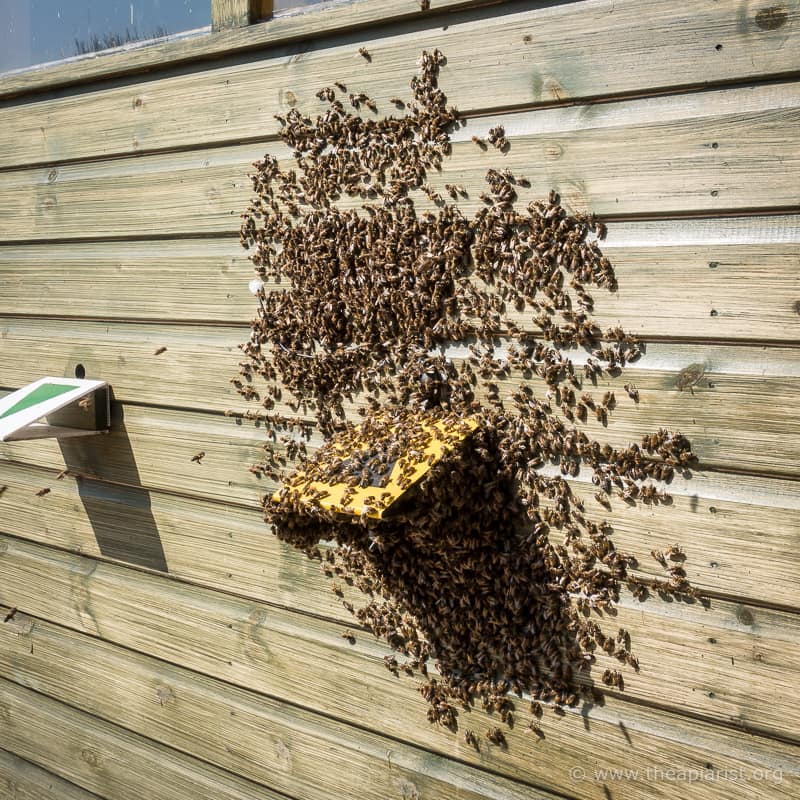 When is a swarm not a swarm?

Surprised because I’d missed all the seasonal clues that indicated swarming might be imminent.

Disconcerted because, in the interests of full disclosure, I’d have to admit to it 😉

The colony behind the near-invisible one inch entrance hole through the bee shed wall is a double brood colony in an Abelo poly hive. It was headed by a 2018 queen (or had been 🙁 ) and had a nice temperament and good manners.

The queen was marked blue and one wing was clipped to prevent her flying off.

But it wouldn’t have stopped her trying to fly off. Instead she would have ignominiously spiralled to the ground 2.

Usually what then happens is she attempts to climb back up and the swarm gathers around her. In a standard hive this is often this is underneath the hive stand.

My guess was that she’d made it up to the landing board and stopped or got stuck there.

I had a gentle prod about in the beard of well-tempered bees but could see no sign of her.

With about 20 more hives to inspect I quickly decided to walk them into a fresh hive … I’d let them do this while I got on with other colonies in the apiary. 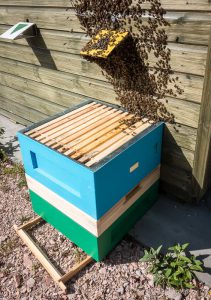 I put together a new floor and a brood box of mostly foundationless frames. I put one or two frames of drawn comb in and gently dislodged a couple of clumps of bees into the box.

Within a very short time more bees were marching down the wall of the shed and clustering between the frames of drawn comb in the brood box.

What started as a trickle became – if not a torrent – then certainly a determined stream of bees taking up residence in the new box.

To encourage them I balanced a split board across the tops of the frames to provide a welcoming dark ‘cavity’ for them to occupy. Very soon you could see bees fanning strongly at the opening between the split board and the shed wall. 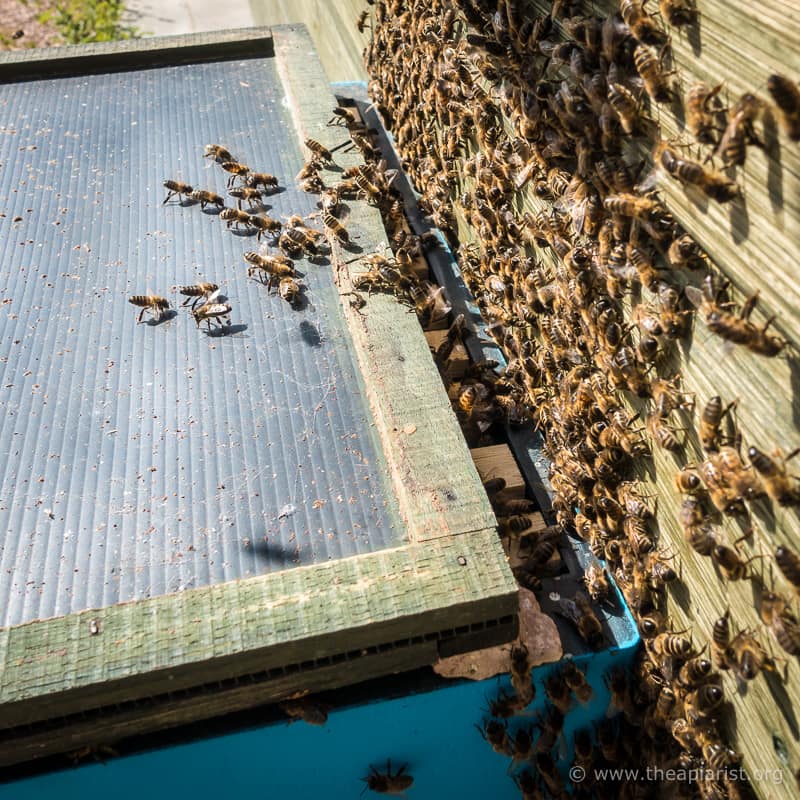 I interpreted this as meaning the queen had entered the box and the workers were encouraging others to join her.

After an hour or so I moved the hive a few inches away from the shed wall, placed a crownboard and roof on and carried on inspecting other hives in the apiary. By this time about 75% of the bees had left the ‘swarm’ and entered the brood box.

And that’s when everything ground to a halt.

There were no bees fanning at the hive entrance. No more bees entered the box through the entrance. Instead they started leaving in dribs and drabs.

I’ve hived swarms like this before, or done the classic ‘walk them up a sheet’ having dumped them from a skep outside a hive. Other than this being a real spectacle, one of the striking features is that what starts as a mass of bees ends being an absence of bees … they all enter the hive. 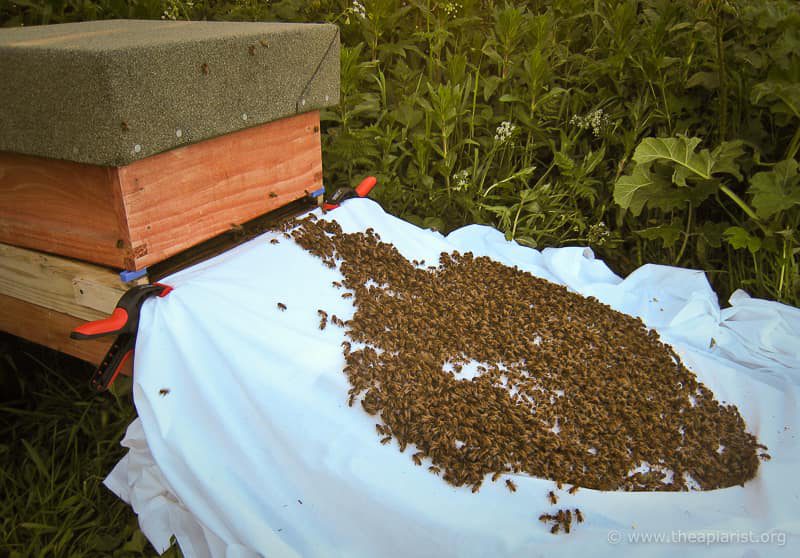 ‘Walking’ a swarm into a hive

Clearly something was wrong and I was beginning to suspect that there wasn’t a queen in the ‘swarm’ at all.

So I did what I should have done in the first place. I had a look in the original hive.

I smoked the double brood box gently from the bottom, intending to encourage the queen (if she was there) into the upper box.

The box was busy but not packed with bees 3, there were good amounts of sealed brood (and a really nice tight laying pattern on many frames).

There were quite a few ‘play cups’ and a few had eggs in them. This is one of the early signs of swarming.

Perhaps I was too gentle with the smoke 🙄

She was the queen I was expecting. Marked blue, though the paint was beginning to rub off a bit, and with the left wing clipped.

She looked like she had lost a bit of weight.

Big fat queens in full laying mode (which they should be getting to by late April) aren’t very aerodynamic so workers slim the queen down before swarming to improve her flying ability.

This queen looked to me like she’d been on the F-plan diet (but remember I’d not seen her since last August). In addition, the number of eggs in the colony was relatively low. This would also be expected if the colony had been preparing to swarm as queens reduce their laying rate in the few days before swarming.

What else could be seen?

Stores and pollen levels were good.

The notable absence from the hive was of well developed, sealed or unsealed queen cells.

A colony will normally swarm once developing queen cells are capped. A colony with a clipped queen often delays swarming for a few more days. It’s therefore usual to find sealed queen cells in a swarmed colony. There may also be unsealed cells as well. 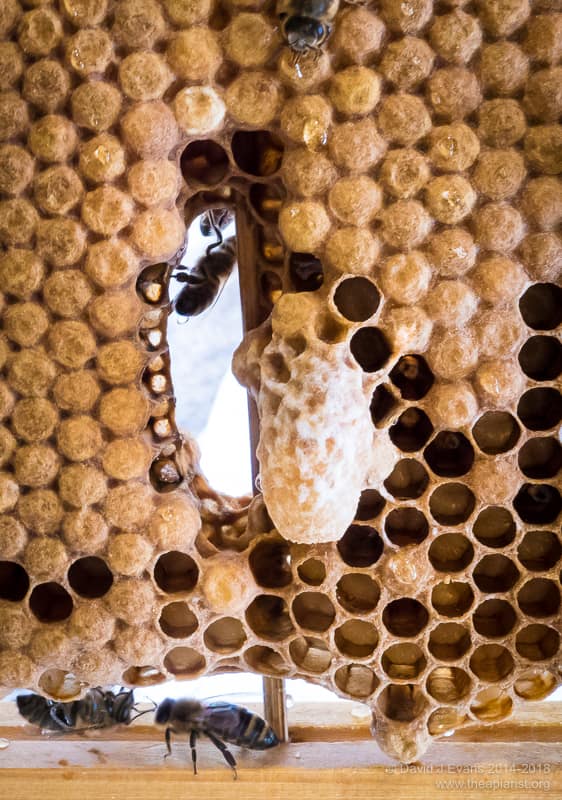 There wasn’t anything close to a sealed queen cell in the colony 4. The best developed were, at the very most, a couple of days old.

Other than the absence of well developed queen cells the colony looked as though it had swarmed.

Since the queen was clipped she had eventually clambered back to the hive and re-entered, leaving many of the workers who had left with her clustered around the hive entrance.

If that was the case, notwithstanding the current lack of well-developed queen cells, they’d be trying again as soon as the weather was good enough. I therefore decided to preempt them by doing a classic artificial swarm.

I moved the queen on a frame with a small patch of brood into the box I’d used to try and ‘walk’ the swarm into. I then moved the – now queenless – double brood box a couple of metres off to one side in the shed. Finally I placed the queenright box in the place the original colony had occupied.

And what will happen?

And at that point I’ll intervene.

The double brood box has lots of brood and stores spread across 21 frames. The bees are well tempered, stable on the comb and have no significant signs of chalkbrood or other diseases (and Varroa and virus levels are exceptionally low – I’d measured both 6).

They are a good stock to make increase from.

I’ll check them in a  few days and see how queen cells are developing. Once there are good sealed cells I’ll split the colony into several 3-5 frame nucleus colonies. The final number will depend upon the number of good queen cells and the number of bees left in the colony.

It should be possible to generate half a dozen good nucleus colonies from a suitable double brood colony without too much of a problem.

I got through all my colonies (eventually). With a reasonable number to compare it’s easy to define the good, the bad and the indifferent ones.

It’s much easier to do this once the season is properly underway, which is a good reason not to inspect too soon in the year. Some colonies are very early-starters, others lag bit. If you inspect too early you might consider the slow ones are dud or failed queens.

I was pleased to see that most were good or at least indifferent, with only a couple clearly exhibiting undesirable personality traits – aggression, laziness, running, following – or, in one case, disease (rather too much chalkbrood). These will be destined for prompt requeening and drone brood will be removed to reduce their contribution to the gene pool. 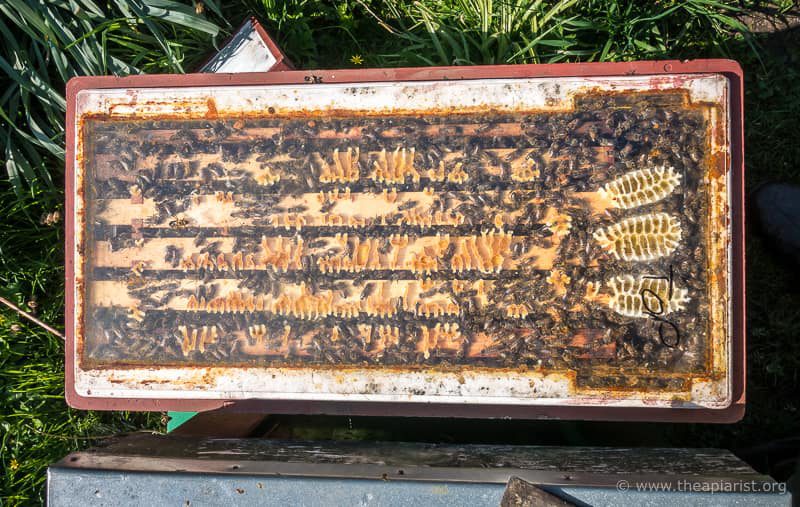 The first inspection is really little more than a check that things are all OK. It doesn’t matter whether I see the queen. If there are eggs present I’m happy.

I lost 10% of my colonies this winter – two from 20. This includes both full colonies and overwintered 5 frame nucs.

One colony drowned. The lid and crownboard blew away in a severe storm and they were subjected to a three-day deluge over a long weekend when I was away.

Mea culpa. I should have had more bricks on the roof.

In the second colony the queen failed and turned into a drone laying queen (DLQ). This had been my worst-tempered colony last year and was scheduled for requeening. However, the queen I found wasn’t the clipped and marked one I’d left there in August. Clearly there had been a late-season supercedure and the replacement queen was poorly mated.

And they’re off! is the phrase used by horse racing commentators at the start of a race. It is also the title of a song composed by William Finn from the musical A New Brain. The song is about the damage gambling does to families. There’s a good cover version by Philip Quast on YouTube.